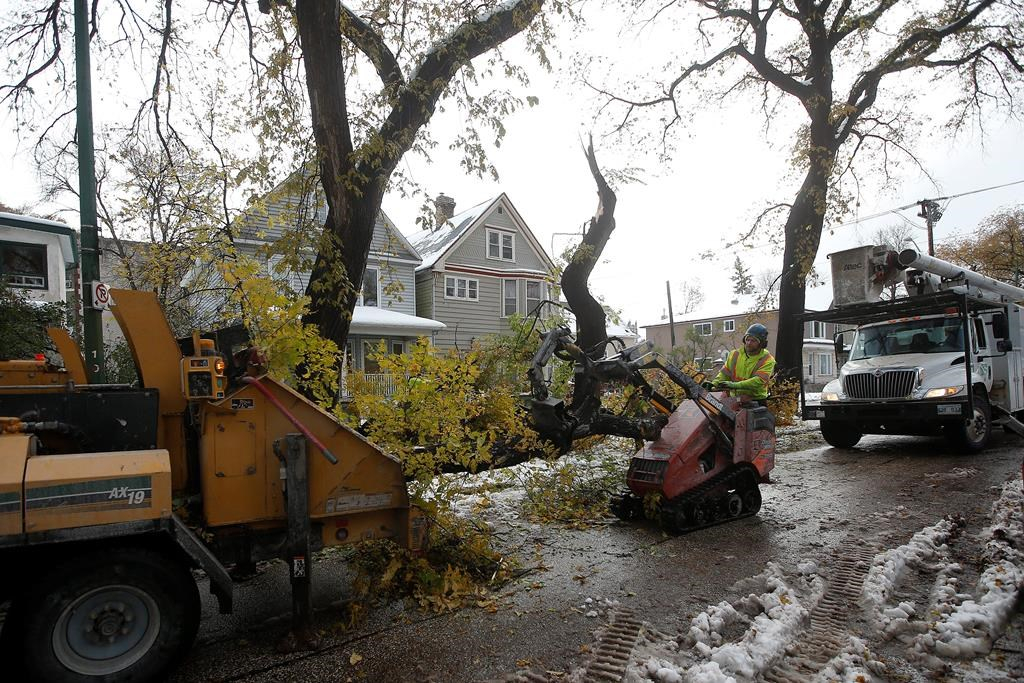 Crews cleanup after a snow storm which hit parts of Manitoba on Thursday and Friday in Winnipeg on Sunday, October 13, 2019. File photo by The Canadian press/John Woods
Previous story

The farm that has been in Jamal Abas' family for four generations was without power for a sixth straight day Tuesday — one of thousands of homes and businesses across Manitoba still suffering after a massive snowstorm that brought down trees, transmission lines and large utility towers.

"No tree was spared in our yard," Abas said. "There was a lot of trees that were planted well before even my dad was born, around the time my grandfather was born. Extensive damage for sure."

Manitoba Hydro was unable to say Tuesday when power might be fully restored. Some 53,000 customers were without power as of Saturday. By Tuesday afternoon, the number was down to 13,000, mostly in small towns, on rural areas and in First Nations communities.

In many areas, neighbours were helping each other any way they could.

Abas was stuck in Winnipeg when the storm hit. He worried for his parents, 180 kilometres north in the Interlake region, but knew they had a generator, plenty of canned food and good neighbours nearby.

His father messaged Tuesday that the family was doing well.

To the southwest, Gerald Barber, mayor of the Municipality of North Norfolk, talked of an "overwhelming" community spirit as residents checked on each other.

Barber was without power for three days before it was restored Tuesday morning. In the interim, he managed to put together Thanksgiving dinner with the help of a generator lent to him by a neighbour.

"Not everybody was out of power so everybody works together, and somebody will cook a turkey for you and barbecue a ham, whatever you have to do," he said.

"In a small community, everybody is quite generous."

The blast of wet, heavy snow that pummelled much of the province Thursday and Friday caused an unprecedented amount of damage, Manitoba Hydro said. It would take several more days to get to and replace more than 2,000 damaged or destroyed polls and towers.

"We've never seen this before and, in some instances, we have to fully rebuild parts of our system, our infrastructure," the Crown corporations's president, Jay Grewal, in a video posted online Monday.

"We solve one problem and behind it are 10 more."

The Canadian Red Cross said about 5,700 people were evacuated from 13 First Nations and are staying with family members, in hotels or at a shelter in Winnipeg.

The Assembly of Manitoba Chiefs said many First Nations communities do not have well-equipped facilities that can serve as shelters, and should be given priority for power restoration so residents can move back home.

"The best and quickest way to resolve this issue is to ensure that those communities are prioritized," Grand Chief Arlen Dumas said.

Several hundred workers are involved in the repairs province-wide, including some from SaskPower, Minnesota Power and Ontario's HydroOne. Line crews must also be available to work for the next 21 days, Manitoba Hydro spokesman Bruce Owen said.

Manitoba Hydro is also asking people to keep fuel-burning equipment outside their homes and use extreme caution when running generators.

On Sunday, crews went to restore power to a home in the Morden area, when a man ran out asking for help because his wife was unconscious. The couple was running a propane heater that wasn't properly ventilated.

"She had carbon monoxide poisoning," Owen said, adding that the woman has since recovered.

I don't write this to kick

I don't write this to kick people when they're down, but there's considerable scientific evidence to support the contention that climate change is generating more frequent and more severe weather. How long do you suppose it will take the people of Manitoba as a group, to collectively realize that to protect themselves, their loved ones, and their collective future, they must endorse the social changes necessary to reduce the adverse effects of climate change? How many snow storms, floods, ice storms, etc will it take to get that though to the collective consciousness of this province? In the meantime, all I can do is pray for the welfare of the individuals affected, and personally push actively for the social and political change necessary to protect us all, since climate change doesn't recognize political boundaries.

We will see this situation

We will see this situation played out over and over and over again.......although the details may vary, the over arching results will be the same. How many times will we be able to rebuild, re-string those high voltage wires, replace those ancient trees, before there comes a point of exhaustion, people, materials, money having run out?

It's time to fully wake up, admit climate change in the form of extreme weather events is here...to stay...with a strong likelihood of getting worse. And then we have to think differently. Maybe centralized power stations and long distance power lines aren't the way forward? Maybe we need local resilience everywhere, micro generation everywhere.......battery back up everywhere to cover our hospitals and our deep freezes.

Deep freezes??? Well yes. Every time the power goes down, freezer food rots, at least if its down for a few days. With climate change, food wastage is going to become unthinkable.

So how do we build an infrastructure that minimizes the short term damage, and also makes it quicker and cheaper to restore power? A distributed smart grid might do the trick...it would certainly be more resilient than what we have now.

The pessimist in me suggests that we'll waste several more years putting the same vulnerable centralized system back in place.....before we realize centralized systems are too expensive, and vulnerable for the new weather systems we face.
The maritimes are experiencing the joys of power outages tonight I do believe, but who's next? We should know in a day or two.