Fate of N.B. clinic speaks to unfinished fight for abortion access in region 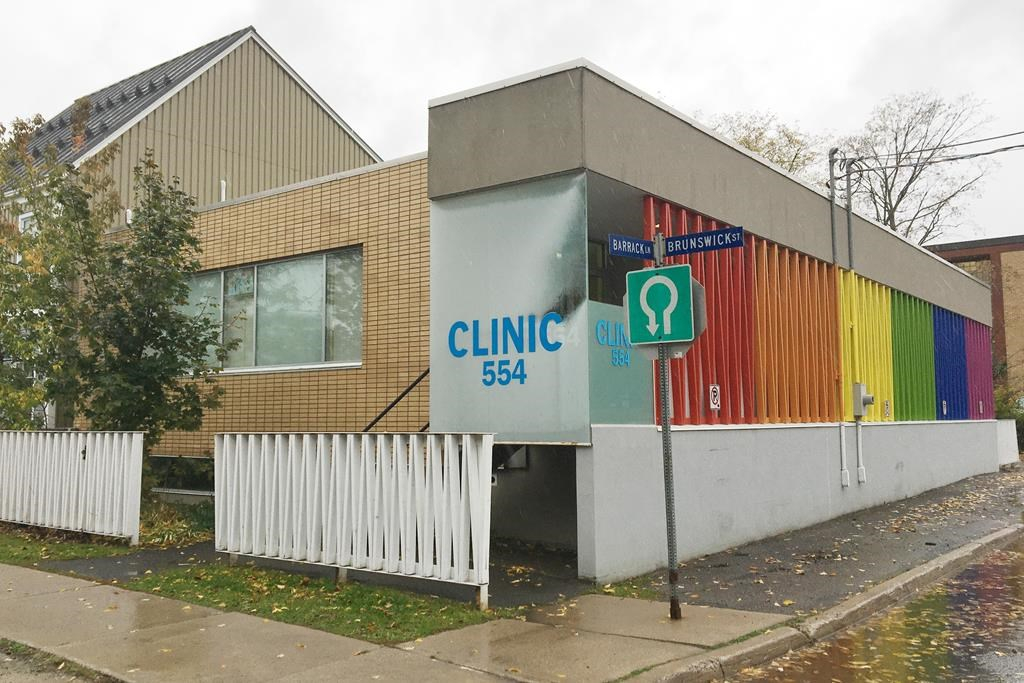 The announcement last week that the only private abortion clinic in New Brunswick would close its doors has made abortion a tangible issue in the federal election and highlighted regional barriers Canadians face accessing the procedure.

More than 30 years after the 1988 Morgentaler Supreme Court decision struck down laws restricting abortion in Canada, advocates say access is still a challenge across the country, with rural Canadians at the greatest disadvantage.

Clinic 554 in Fredericton blamed its impending closure on a long-standing provincial refusal to fund surgical abortions performed outside a hospital. Critics say the policy is symptomatic of obstacles faced in some parts of Atlantic Canada, where people seeking abortions have been confronted by decades of government resistance, a limited number of clinics, lingering social conservatism and a severe doctor shortage.

Sarah Kennell, director of government relations with Action Canada for Sexual Health and Rights, noted a lack of political will to confront policies like New Brunswick's. She also highlighted the fact that none of the Atlantic provinces cover abortions after 16 weeks, as opposed to 23 weeks in other parts of the country.

This limitation forces people to travel to other provinces and sometimes to the United States at their own expense, she said. "The burden to access what is considered to be a medically necessary service is quite high," Kennell said.

New Brunswick is the only province where surgical abortions are only covered if performed in a hospital — a cause for concern "under the accessibility and comprehensiveness criteria of the (Canada Health Act)," according to Health Canada's latest annual report.

After Fredericton's Morgentaler clinic closed in 2014, citing lack of provincial funding, the Liberal government of the day removed a regulation requiring women seeking hospital abortions to have two doctors certify the procedure as medically necessary. But the regulation limiting funding to abortions performed in hospitals remained.

It's this barrier that has forced Clinic 554's hand, according to its medical director Dr. Adrian Edgar. He said many of his patients can't afford the procedure, which costs between $700 and $850, and expenses have become too great to keep the clinic open.

Edgar said he has presented provincial officials with science-based evidence demonstrating the safety of abortions performed in clinics, and he can't explain why resistance has been so strong.

"A lot of very intelligent people have put our heads together and just feel like we're still knocking them on a wall, because I can't figure it out," he said in a phone interview.

Abortion services are provided at just three hospitals in New Brunswick, Dr. Edgar said, with the closest to Fredericton 150 kilometres away in Moncton.

He said there is a domino effect within the region when services are reduced in one location. "When there's an access issue in New Brunswick, then our colleagues in P.E.I. or Nova Scotia have to take up the slack," he said. "We're always kind of shuffling the problems around and trying as a greater Maritime community to cope with it."

The tight-knit nature of Atlantic communities is one factor driving patients greater distances to avoid a hospital abortion, out of fear of being recognized, according to Dr. Edgar. He said many patients fear the stigma attached to abortion and feel intimidated by a lasting anti-abortion movement in the province.

Kelly Gordon, an associate professor of political science at McGill University who has studied anti-abortion discourse in Canada, said unlike in the United States, where abortion is openly discussed as a "politically salient issue," Canada's major political parties have historically avoided the topic.

"It's kind of seen as a hot potato. But that's been particularly true in terms of party politics in Atlantic Canada," she said from Montreal. "Both Liberal and Conservative governments have been sort of very reticent to touch the issue at all."

This phenomenon has been especially pronounced in Prince Edward Island, which only began covering abortions in 2016 after a provincial Supreme Court challenge. Anti-abortion advocates had dubbed the province a "sanctuary of life" during the nearly 30 years when abortions were not covered, when women seeking the service would be forced to travel to New Brunswick or use unsafe methods to terminate a pregnancy.

In Newfoundland and Labrador, the province began covering out-of-hospital abortions in the 1990s after Ottawa spent years deducting the costs from the province's transfer payments. But New Brunswick has remained a holdout.

Clinic 554 and advocacy groups like Action Canada have called on whatever party takes power after the Oct. 21 federal election to hold New Brunswick accountable under the Canada Health Act by withholding health transfers until the province agrees to fund abortion care outside of hospital settings.

During a Fredericton campaign stop this week, Liberal leader Justin Trudeau promised he would use "all tools at our disposal" to enforce the Canada Health Act. NDP Leader Jagmeet Singh criticized Trudeau for waiting so long, saying he had four year to protect access in New Brunswick.

Gordon, the political scientist, said it's a tricky time in Canada for a prime minister to be seen as interfering with provincial policies. "It's an interesting question of whether he could effectively do it, or whether there's will in the province," she said.

Premier Higgs seemed to answer the question of political will on Wednesday, defending the province's policy and accusing Trudeau of making empty threats. "All the tools that (Trudeau) talks about are the tools he's had for the last four years, and the decision that was made here in New Brunswick was made four years ago," the premier said.

Dr. Edgar said he's hopeful that federal leaders promising action will keep their word if elected, but after watching decades of hard-fought activism with little movement on the issue, he'll be satisfied once he sees the regulation repealed.

"We're talking 30 years of asking to just have the same rights as every other Canadian," he said "You're always hopeful that can happen within your lifetime."

I did a bit of reading ... it appears that the clinic has flooded multiple times, and might not have been fully insured, as a (successful) GoFundMe campaign was launched to cover significant flood reparation costs to the tune of I believe it was $15000. Since the cost was covered by donation, this year's expense can't be the cause of the closure.

It looks like the current preferred approach to abortion in NB is a two-stage pharmacological procedure, with a prescription by a doctor being filled at a pharmacy, and taken at home. In NB pharmacies, the prescription cost is paid by NB medical insurance, typically at a cost of between $500 and $800. The maximum payout by NB provincial medical insurance is $800 -- which it covers also for such a prescription filled out of province.

So I wonder if the $800 costs-not-covered was the cost of the medication that might be distributed by the clinic? It could be just coincidence.

Reading the general information online about NB public medical insurance, it seems that surgical abortions are not covered in public clinics, either: only in hospitals.
I heard a CBC interview with the head of the clinic in which the doctor indicated free abortions cost his clinic $800 each. I haven't been able to locate the NB public insurance fee schedule's rate for surgical abortion, but in BC, it's $500.

The hue and cry in NB is that private clinics aren't funded for surgical abortions, that are covered in NB hospitals.

In BC, Brian Day, the owner of a private surgical facility, is testing the provision of our federal health legislation which does not provide for payments to private surgical clinics. It has dragged on for several years, and is expected to eventually go to the Supreme Court of Canada, and since I've been unable to find the SCBC decision on the matter, it appears to be ongoing.

In the meantime, NB may well be simply playing according to the law in not funding surgical abortions out of hospital.

Ultimately, the hue and cry should be not that governments are not in the business of supporting private clinic surgeries, but that they are not requiring public hospitals to make publicly-funded surgical abortion available, or alternatively opening public community clinics and equipping them to provide.

Perhaps because the pill has only about a year ago been available, doctors are apparently reluctant/unwilling to prescribe medical abortion pharmaceuticals, seemingly preferring the surgical route.

I find myself agreeing with the point made in an article in the Globe and Mail, "... the medical community – including the professional colleges that oversee provincial standards – needs to do more to ensure universal access."

The Globe article may be somewhat inaccurate: it says the pills can be prescribed only to the 9th week (Planned Parenthood says 10 weeks). In any event, unless the convention has changed fairly recently the gestation period, is calculated from the date of the first missed menstrual period as day "0," with 10 weeks being 70 days after that, and not an estimated/calculated date of ovulation which seems to be the method employed at the Globe.

It's shocking how inaccessible abortion is in Canada, generally, given that therapeutic abortion has been legal in Canada (and available in urban centres) for half a century now.

But the problem is not that surgical abortion (the thin edge of the wedge) is not available in private, for profit clinics.

(PS: it doesn't seem to be better available in the US, and the mixed Australian system is awful, even in metropolitan centres. I know people who live there, and they struggle with services unavailable in private clinics, and very long wait times in hospital clinics, even for out-patient services, as well as there being a paucity of specialists who will take patients under public coverage only).

(Unfortunately, there is a confusing variety of systems, as they are regulated provincially, not federally, and there seems to be no overarching "Canadian standard.")