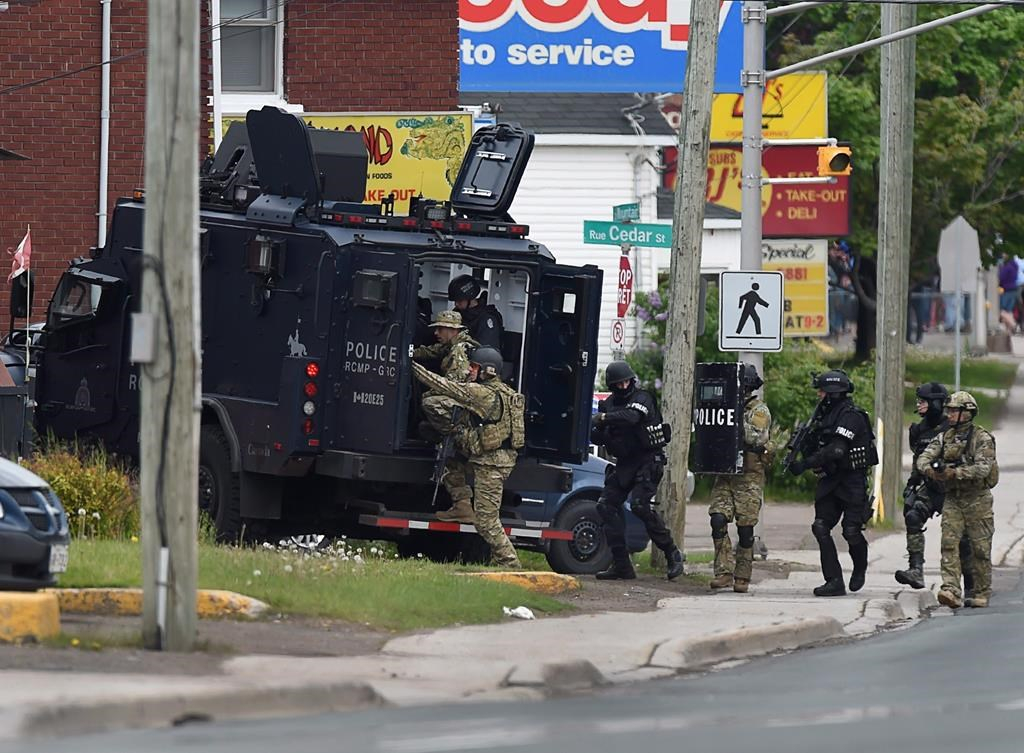 More than a dozen RCMP officers who responded to shootings in Moncton, N.B., that claimed the lives of three of their colleagues in 2014 are now looking to sue the attorney general of Canada for negligence.

Originally four officers filed statements of claim with the Court of Queen's Bench last month, but other current and former officers have joined the list, while two who had filed claims have withdrawn them.

The filings say the officers were inadequately trained and outfitted to deal with a heavily armed shooter on June 4, 2014, and now they suffer from post-traumatic stress disorder and other ailments.

Constables Fabrice Gevaudan, Dave Ross and Doug Larche were killed, while constables Eric Dubois and Darlene Goguen were wounded when Justin Bourque targeted police officers in hopes of sparking an anti-government rebellion. The rampage set off a 30-hour manhunt that drew in officers from around the region.

Bourque pleaded guilty and was given three consecutive life sentences without chance of parole for at least 75 years.

Court documents detail the anguish felt by officers who survived the shootings and now suffer nightmares and PTSD.

The statement of claim from Const. Martine Benoit describes the danger officers faced.

"The plaintiff attempted to exit her vehicle to assess the situation when she was ambushed by the shooter before she could get out and she was being fired at with heavy gunfire," it says. "The plaintiff remained in her vehicle and ducked behind the engine block to use it as cover. She tried to reverse the vehicle without success because it was disabled by the gunfire."

The statement of claim from Const. Mathieu Daigle describes seeing Const. Gevaudan being shot. Daigle and other officers followed the sound of the suspect's gunshots southbound on Mailhot Avenue and discovered the lifeless body of Const. Ross, a close friend of Daigle.

The documents say Daigle now wakes up at night sweating because of nightmares related to the shootings.

Others say officers felt defenceless against the shooter.

C8 carbine rifles were not available to general duty officers during the shooting spree in Moncton, despite being approved for use in 2011. Their introduction was delayed on several occasions.

The RCMP was convicted in 2017 on Canada Labour Code charges that the police force did not act with due diligence in the rollout of carbines for members, putting their lives at risk.

In that ruling, Judge Leslie Jackson found the failed to provide its members with the appropriate use-of-force equipment and user training for responding to an active threat or active shooter in an open environment, leaving them "ill-prepared to engage an assailant armed with an automatic rifle."

Lawyers for the force later said they would not appeal the ruling, but lawyer Brian Murphy, who represents the officers in the suit, said that's far from being an apology. "This is how they express remorse — we're not appealing. That's not really heartfelt," he said in an interview.

Murphy said the officers want an apology and accountability from those who made decisions on providing officers with carbines.

"The RCMP higher-ups, the white shirts in Ottawa or other places, decided collectively or individually not to supply available carbines after they were essentially ordered to do so after the awful events in Mayerthorpe," he said Thursday, referring to a 2005 shooting in Alberta that left four Mounties dead. "It was the culture in Ottawa and other places amongst the higher-ups that we really didn't need these carbines."

He said the list of plaintiffs involved in the lawsuit is being finalized, but he expects the final number to be about 15. He said the attorney general will be served with all the suits at once, shortly before Christmas.

When asked for comment, RCMP spokeswoman Cpl. Caroline Duval said by email that the force "would not be in a position to discuss legal matters outside of the appropriate legal processes and filings."

Murphy said he doesn't expect the allegations to be heard in court before 2024.