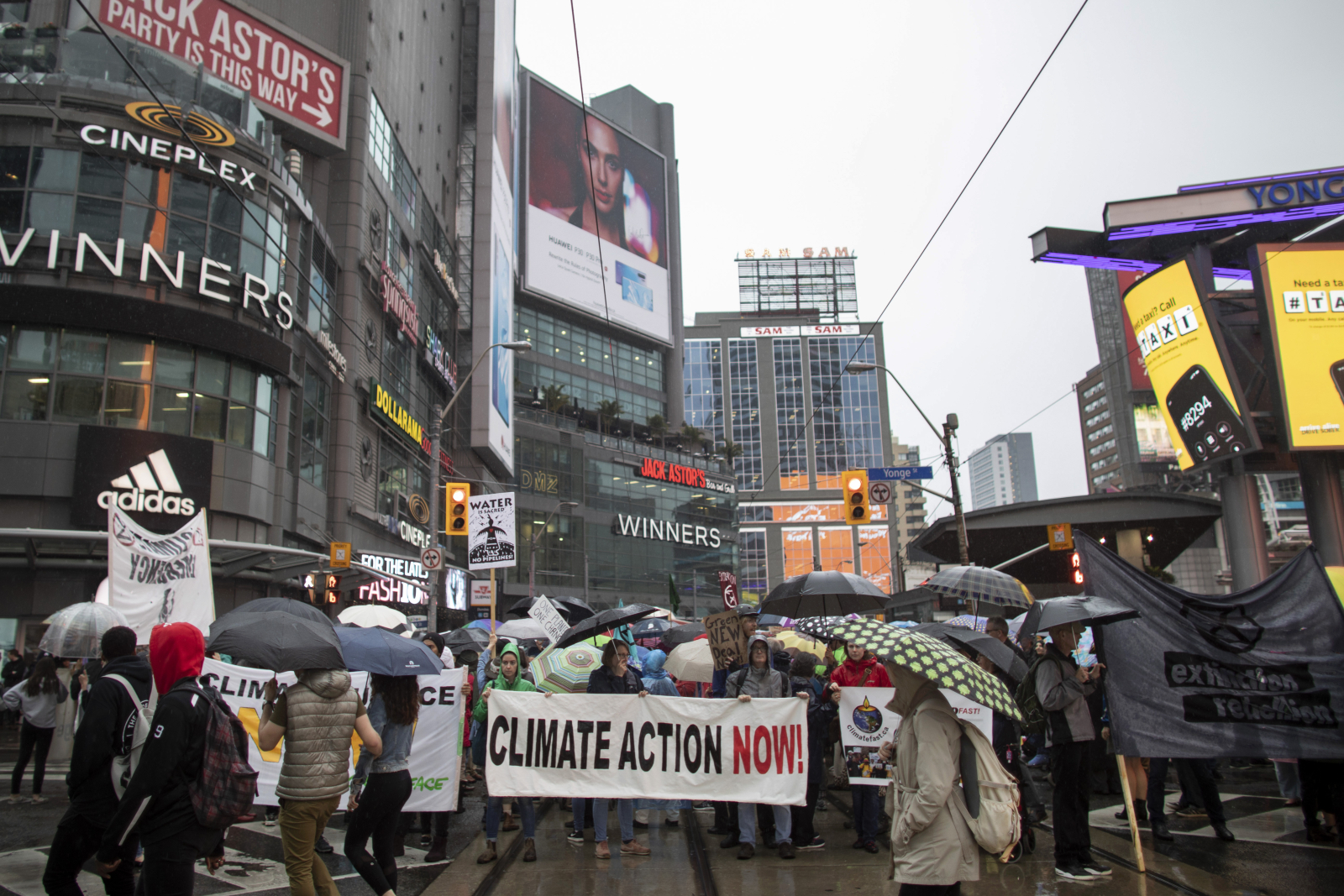 Protesters, joined by faith leaders and members of Extinction Rebellion Toronto, take over the intersection of Yonge and Dundas streets in Downtown Toronto on June 10, 2019. Photo by Nick Iwanyshyn
Previous story
Next story

More than 200 municipal leaders have issued a “report card” on the federal parties' climate platforms in hope of pushing Canada's next government to better tackle the climate crisis's impact on cities.

The Climate Caucus is a network of hundreds of Canadian mayors and city councillors working to limit global heating to 1.5 C, as recommended by the United Nations Intergovernmental Panel on Climate Change's.

On Wednesday, the organization released grades for each party's climate change platform based on an assessment of their policies on transportation, buildings, waste, land use and adaptation.

The grades are as follows:

"One of our main purposes as local governments is to challenge the provinces and federal government to do more on climate change," Rik Logtenberg, a city councillor in Nelson, B.C., and co-founder of the Climate Caucus, said in an interview. "We have sympathy and understanding of the task at hand that others don't. We understand that fighting climate change is complicated, especially if you're trying to build a realistic climate platform. We understand that it's difficult."

According to UN Habitat, cities consume 78 per cent of the world’s energy, and produce more than 60 per cent of greenhouse gas emissions. By 2050, cities will be home to two-thirds of the world's population.

In Canada, cities are on the frontline of the fight against the climate crisis, Logtenberg said. But receive just over 10 cents on the dollar of all taxes collected in Canada, 80 per cent of which goes directly toward providing services, operations and maintenance.

This means local governments have only 20 per cent of the tax dollars they receive to protect and preserve the majority of Canada's infrastructure from climate change.

According to a recent report conducted by Federation of Canadian Municipalities and the Insurance Bureau of Canada, avoiding the worst effects of climate change at the municipal level will cost an estimated $5.3 billion per year, shared among all three levels of government.

Whoever forms government Monday will have to work with the leaders on the ground dealing with the issues that best facilitate mitigation and adaptation efforts.

"Our asks have a lot of weight, because these are specific things we need tomorrow. Cities are carrying a lot of the weight right now to mitigate climate change, so this report card is deeply grounded in the reality of today" - @riklogtenberg

"We, probably more than any other organization in Canada, are dealing with the impacts of climate change already," Logtenberg said. "We’re actively working on rebuilding our transportation infrastructure. We’re rebuilding our building codes. We’re managing our municipal composting system with the intent of removing methane. We are dealing with the realities of climate change day to day."

"Our asks have a lot of weight, because these are specific things we need tomorrow," he added. "Cities are carrying a lot of the weight right now to mitigate climate change, so this report card is deeply grounded in the reality of today."

'The Conservatives are a real disappointment'

According to the report card, local governments own approximately 60 per cent of all infrastructure in Canada, such as drainage systems, which are under threat of damage or destruction from increased flooding, fires and other extreme-weather events.

The transportation sector represents 23 per cent of total emissions, the second-largest proportion of GHG pollution in the Canadian economy, behind only the oil and gas sector. Canada's municipalities have increasingly sought to electrify public transit systems, and are looking for federal support.

By some estimates, buildings make up half of Canada's emissions, due largely to aging, leaks and fossil fuel sources used for heating and cooling. A federal green-building plan could help fund retrofits and more energy-efficient homes.

The Green party comes out ahead on all these criteria and issues, Logtenberg said, because they have the most comprehensive plan for local governments, including a priority on food systems.

The Liberals and NDP "came out tied," he said, because they propose similar policies. While the Liberals' climate plan "is pretty thoughtful and detailed,” he said, “it’s just a bit lazy, even a bit unrealistic." The NDP's plan, he said, "has more urgency, but wasn't as rich or detailed as we'd like to see."

Logtenberg did note that the NDP had the strongest emphasis on waste reduction and changing the culture of consumption.

"The Conservatives are a real disappointment," he added. "It just gets the pass because we had the People's Party of Canada on the spectrum, and we didn't want to equate the two platforms."

"The People's Party of Canada platform is completely ridiculous," he said, noting that the party doesn't even recognize there is a climate emergency.

Logtenberg said the Conservatives, unlike the PPC, at least "admit the reality.”

"I think that’s a massive step for them to commit to that, especially if they became government," he said. Their climate plan is rooted in targeting heavy emitters such as fossil fuel companies, which means "they're in the right ballpark, they're focusing on the right actors," he said.

And while "their solutions are woefully inadequate," Logtenberg said, the Conservatives can be forced to move aggressively "because they've identified the right problem."

The Climate Caucus report card comes on top of the FCM's assessment of the federal parties' platforms as they align with their asks. The FCM demands include a $1-billion annual fund over 20 years for local climate adaptation, a scale-up of federal funding for disaster mitigation and climate adaptation that will unlock ready-to-go projects.

The FCM also recommended that parties create a targeted program to update Canada's flood-plain maps, working with municipalities to assess and mitigate the risks our communities face.

In a statement to National Observer, an FCM spokesperson said they will "also push parties to continue to build local capacity to assess and respond to climate risks — empowering local leaders to drive the most cost-effective, high-impact projects for Canadians."

I'm not sure why the NDp and

I'm not sure why the NDp and the Liberals tie............since one party wants to build a pipeline that would carry carbon intensive bitumen to our coast for the next 50 years, and the other says no to that. Could it be that some cities are still having to play footsie with Big Oil? Do we as Canadians have to accept that as an adjunct to a good climate policy? The Greens are with the NDP on that one....but I do agree the Green plan is more aggressive in terms of 0 net retrofitting and rapidity of decarbonization.