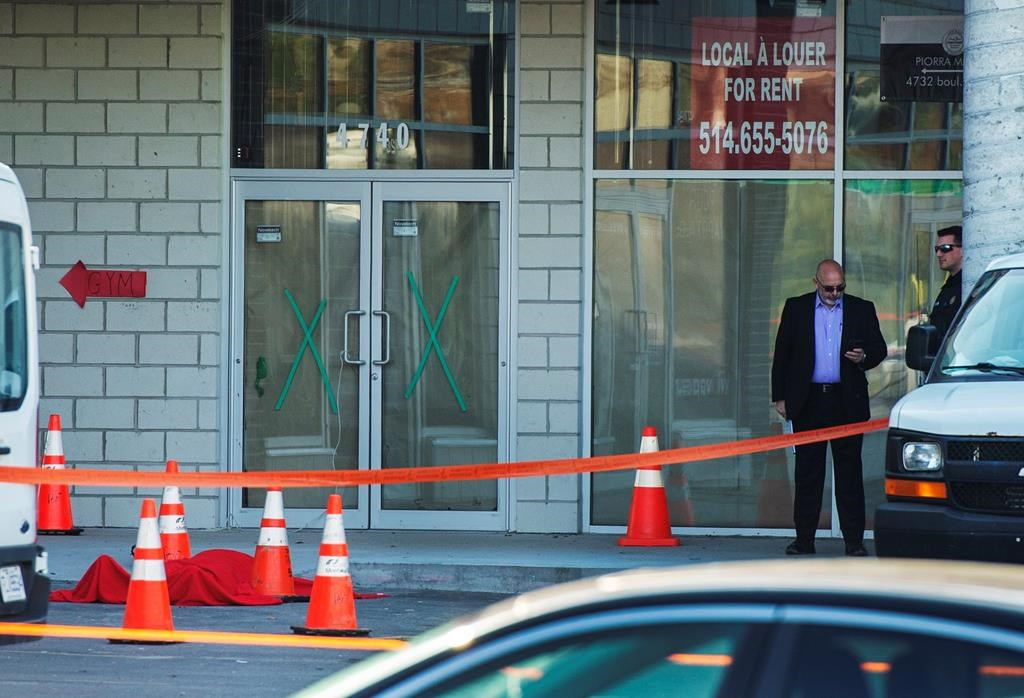 Investigators stand near the body of alleged mob boss Andrew Scoppa, who was shot to death, in Montreal, on Monday, Oct. 21, 2019. Photo by The Canadian Press/Ryan Remiorz
Previous story
Next story

Police in Montreal say a man was gunned down Monday outside a business in the city's west end in a slaying that appears to be linked to organized crime.

Homicide detectives were dispatched to the Pierrefonds borough to probe the 13th slaying of the year in the city after witnesses made the discovery in the parking lot of a strip mall just after 8 a.m.

The male victim was lying in a pool of blood and was pronounced dead at the scene by paramedics.

Montreal police said they have not made any arrests and could not say how many suspects might be involved.

"It's still under investigation," Const. Raphael Bergeron said, adding that investigators are examining security camera footage from nearby businesses and looking to speak to witnesses.

The killing comes just five days after police arrested four people who were allegedly part of an Italian organized crime cell headed by Salvatore Scoppa up until his death last May. Media reported Salvatore and Andrea Scoppa are brothers.

Salvatore Scoppa was killed in a brazen attack inside a crowded hotel in the Montreal suburb of Laval. Police in Laval launched an offensive against organized crime following the shooting at the Sheraton Hotel, which police said put the lives of hundreds of people inside the hotel at risk.

Provincial police said last week they had no doubt that Salvatore Scoppa's killing was in response to the four 2016 slayings.

The investigation into the killings, dubbed "Premediter" (premeditate), began in January and culminated with the arrests and the seizure of an arsenal of weapons, explosives and a motorcycle allegedly used in the killing of Sollecito.

Southern Alberta man files counterclaim against intruder he shot in 2018