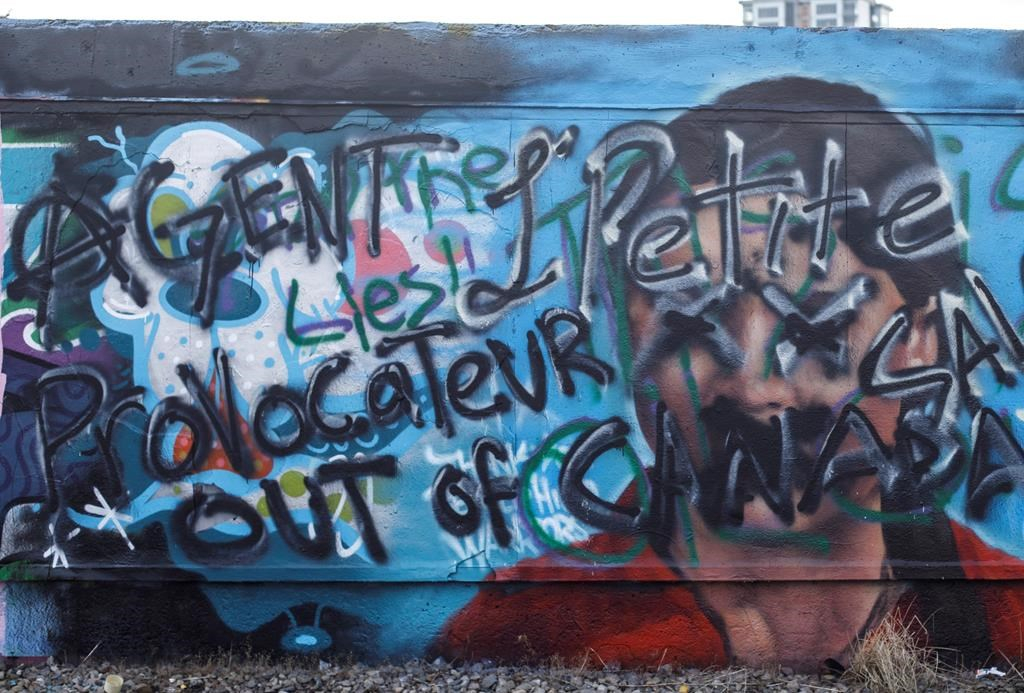 A defaced Greta Thunberg mural in Edmonton, on Friday, Oct. 21, 2019. Photo by The Canadian Press/Jason Franson
Previous story
Next story

A man says he defaced a mural of teenage Swedish climate activist Greta Thunberg because he wanted to take a stand peacefully and the artist who created it says he doesn't mind.

James Bagnall says he wrote "stop the lies" and "this is oil country" on the painting of the 16-year-old girl against a bright-blue background along a light-rail transit line in Edmonton.

"My intent was to just let people hear my voice and my opinion," he said in an email Monday. "I was not taking shots at Greta as a person. She's only a child and I would never do that.

The eyes on the portrait were blacked out, and a slur and a message telling Thunberg to leave Canada were written over top in French. Bagnall said he was not responsible for the French messages.

Thunberg has made headlines for her passionate pleas to world leaders to take tougher action on cutting greenhouse gas emissions. She joined thousands last Friday in a march through downtown Edmonton to a climate action rally at the legislature grounds. The group vastly outnumbered oil-and-gas industry supporters who showed up.

Thunberg repeated her message that the future of the planet is at stake, but she refrained from any direct criticism of the Alberta oilsands.

Artist AJA Louden said it took him about 2 1/2 hours to create the mural on the "free wall" where anyone is allowed to paint.

"My goal was to keep the conversation going after the rally. The problem is still here, and sometimes all that productive energy seems to go away when the rally ends," he wrote in an email.

He said he's not upset because people scrawling over his work are telling their own story.

"Our local economy is dependent on the energy industry and there's some anger and fear as people come to terms with the changes we need to make," Louden wrote.

"Focusing that anger and fear into making large-scale change so we can succeed in the future — as opposed to attacking a young girl trying to speak up — will be key for us."

The climate crisis is a complicated problem, Louden added.

"Denying it is a problem, or retreating into entrenched ideological camps who are too bitterly divided to collaborate, makes the problem a lot harder to solve," he said.

"Alberta has some of the cleanest fossil-fuel-based energy production available, but it still causes damage. We also have one of the highest per capita rates of energy use as a country."

Before it was defaced, the mural read "Thank you, Greta" and "Thank you, Beaver Hills Warriors" — a reference to the grassroots environmental group that helped lead the rally.