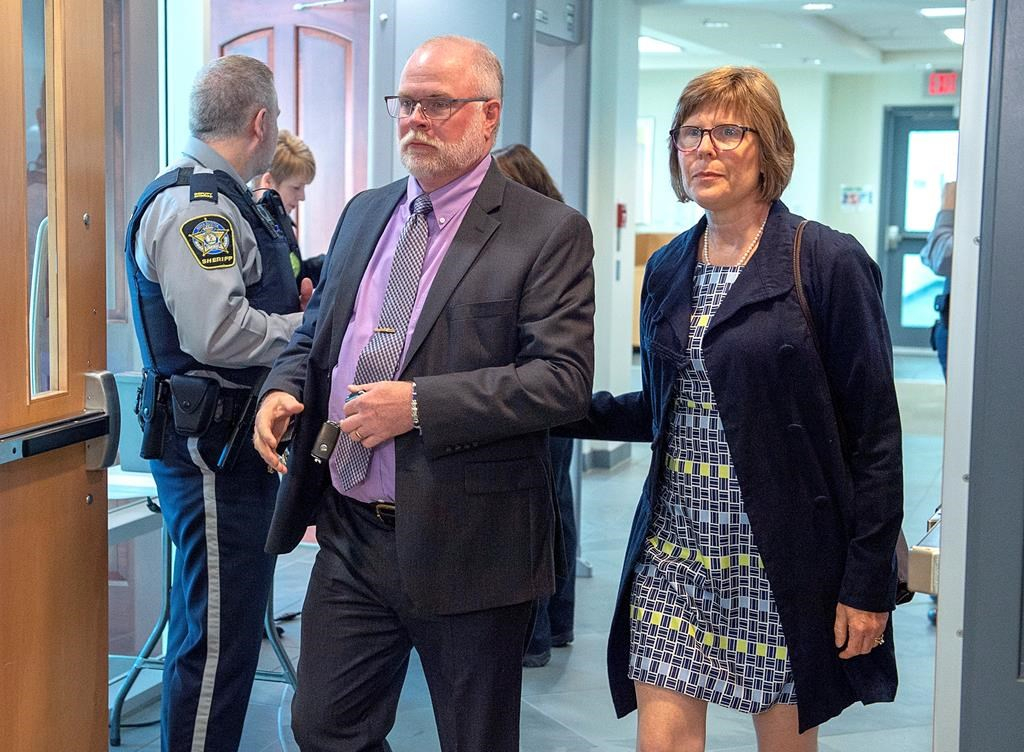 A former police chief in Nova Scotia who was described in court as a "father figure" to a 17-year-old girl with mental health issues was convicted Thursday of sexually exploiting the teen.

Nova Scotia Supreme Court Justice Mona Lynch said John Collyer was the head of the Bridgewater Police Service in 2016 when he groomed the girl for a sexual relationship and later sexually assaulted her in his car.

Court heard Collyer became a mentor to the girl when she and her family moved to Bridgewater, a town in the South Shore region. She was 12 at the time and Collyer was deputy chief.

Over the years, Collyer and his wife Sheri spent a great deal of time with the family, offering them emotional and financial support.

As well, Collyer took the girl to appointments, on shopping trips and sometimes to a beach near his home.

The Crown argued his relationship with the girl changed as she got older, developing into a sexual interest that he expressed through online conversations.

"John Collyer denied any sexual interest in the complainant," Lynch said, but she found that messages on Facebook told a different story.

Records obtained from Facebook showed that between April 2015 and August 2016, Collyer's Facebook account included 596 messages between him and the complainant. However, 536 of them had been deleted by the time the province’s police watchdog agency started investigating in August 2016.

The messages that remained were described as innocuous, but the girl's mother produced screen shots of other messages that Lynch said were sexual in nature.

In particular, Lynch focused on a video Collyer sent to the girl, which included images of a small dog tugging at the bikini strap of a young woman.

Collyer sent a message with the video, telling the girl: "Guess which little dog I'm rooting to win the tug of war! ... I wonder if you could train yours to do that." Lynch said the only reasonable inference that could be drawn from that message was that Collyer had an interest in seeing the girl’s breasts.

In another message, Collyer wrote: "OK ... you are hot. Love you a bit more!" And in a subsequent message, Collyer asked about sending the girl "dirty limericks," and he told her he would "get in trouble" if he was alone with her.

Collyer told investigators that the messages were sent when he was drinking, and he insisted that he later apologized to the girl's mother when he realized the innuendo was inappropriate.

The judge said the intent of the messages was clear.

"The messages are sexually suggestive and they lead to an inference of an older man grooming a young girl to have sexual contact," Lynch's ruling says. The judge said the complainant did not respond to Collyer's remarks in a sexually suggestive way. Instead, she said she found them "gross."

The victim, whose identity is protected by a publication ban, was present in the courtroom with her mother as the decision was read. Her medical records, which were admitted as evidence, show she had been diagnosed with attention deficit hyperactivity disorder, obsessive compulsive disorder and oppositional defiant disorder.

During Collyer's trial last summer, a psychiatrist testified that in 2016 the girl had an intellectual and emotional age of between 10 and 12 years old.

The girl told investigators that sometime in the spring of 2016, she and Collyer were driving in his small convertible when he asked if she could make herself have an orgasm, and he then reached between her legs, pushed aside her skirt and penetrated her with his fingers.

The girl said she did not agree with this. "The complainant was clear and did not waiver in the details of the events in the car," Lynch said.

Five days after Collyer learned he was under investigation, the police chief reported that he had lost his cellphone. It was never found.

Lynch said it was reasonable to conclude Collyer had disposed of the cellphone to avoid recovery of its messages.

The 26-year veteran of the police force was originally charged in May 2017 with sexual assault and two counts of sexual exploitation, but one of the sexual exploitation charges was withdrawn. He was suspended from the force shortly afterwards.

He was tried on one count of sexual assault and one of sexual exploitation. Lynch found him guilty of both crimes, but she ordered a conditional stay on the sexual assault conviction based on the principle that an accused cannot be convicted of two offences arising from the same actions.

Sexual exploitation involves the sexual touching of a minor by a person in a position of trust or authority.

"It shows the bravery ... that the complainant and her family had to actually come forward and see this through," he said outside the courtroom. "They are in a very small community where they're confronting a person ... who has a very high office and has a great deal of power."

Collyer, who was released with conditions, is to be sentenced on March 4.

This report by The Canadian Press was first published Oct 24, 2019.