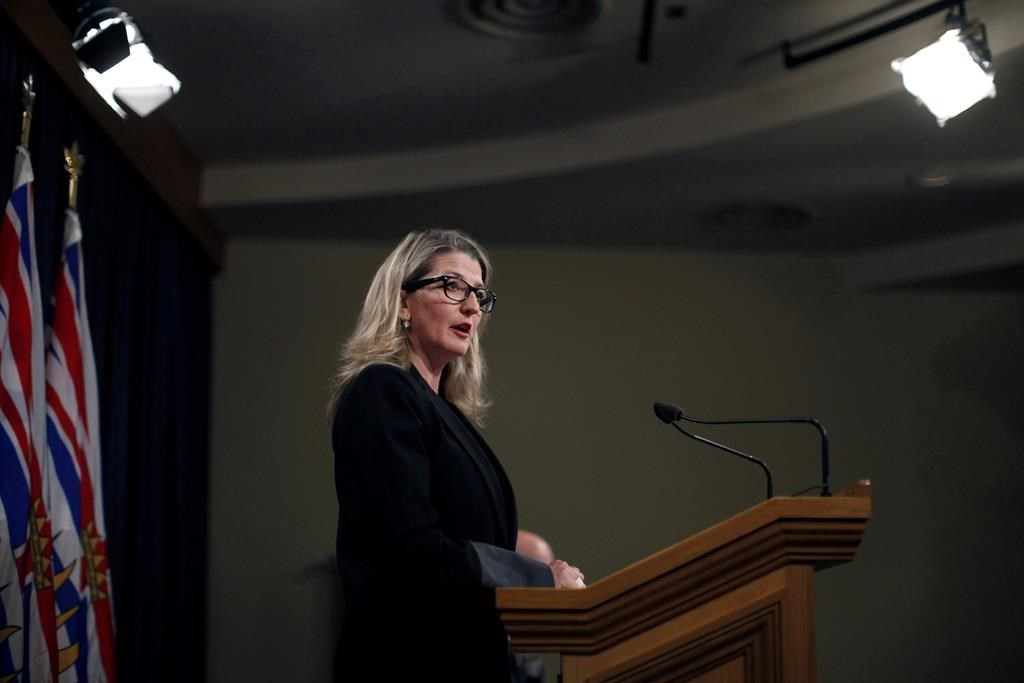 Minister of Agriculture Lana Popham speaks during a press conference in the press gallery at the Legislature in Victoria, B.C., on June 20, 2018. File photo by The Canadian Press/Chad Hipolito
Previous story
Next story

A farm home in the Fraser Valley that provides addiction treatment and life-skills recovery help for women has received an eviction notice after the pastoral property along the Canada-U.S. border was deemed not to have met regulations governing the use of British Columbia's agricultural land.

Angie Appenheimer, a regional director at the Abbotsford Women's Centre, said Tuesday she's started looking for a new facility to house nine women who live at the 1.2 hectare property for up to a year.

The centre appealed the eviction notice decision last summer, suggesting it could expand its vegetable gardens to become more like a farm, but the appeal was denied and the eviction is due June 4, 2021, she said.

"We have to look for another location because that's what we have to do," Appenheimer said. "We have to continue to be looking for a place for these women to continue their program."

The centre has been operating since 2003, offering faith-based services to the women battling addiction, she said. It has an 80 per cent success rate, said Appenheimer.

A site inspection last year by officials from B.C.'s independent Agricultural Land Commission started an examination process that resulted in the two-year eviction notice, she said. Appenheimer described the property as rolling, rocky and treed, with what appears to be little potential for agriculture.

The Agricultural Land Commission is an independent tribunal responsible for administering a law that aims to preserve agricultural land and encourage farming.

The land commission, in its June 4, 2019, ruling, says it considered the use of the women's centre as a recovery facility, but decided it is not a farm and its priority is to ensure farmland is used for agriculture.

"The panel finds that the continued use of the principal residence, craft room and fitness room for the non-farm purposes does not provide a benefit to agriculture, and therefore fails to meet the mandate of the commission under section 6 of the Agricultural Land Commission Act," the decision states.

The eviction of the women's centre has become part of the Opposition Liberals campaign on behalf of frustrated farmers to repeal NDP government legislation that they say places farmland ahead of the people who work on the land.

About 100 B.C. farmers along with their supporters were at the B.C. legislature Monday calling on the New Democrat government to repeal Bill 52, which they say is splitting up families because the land commission consistently denies applications from farmers who want to build homes for their children on the farms.

The New Democrats passed the legislation partly in response to prevent farm property owners from building so-called monster-sized mansions on farmland or using the property to dump gravel.

Appenheimer said she couldn't comment directly on the land commission's decision to deny the appeal by the women's centre.

"When we were denied the appeal, I was disappointed, but not surprised, I guess, because at the end of the day, they were sticking to their mandate," she said. "We were realizing they have a mandate, but hoping they would see beyond the mandate to maybe being able to give back a little piece of ALR land for the purpose of reclaiming peoples' lives."

Appenheimer said perhaps in future the ALR will consider cases like the women's centre to relax its farm-use mandate.

"There's a great big house on this hill in south Abbotsford right near the border that's been there for several years as a kind of a safe house for battered women in the Abbotsford area, and the land commission came along recently and told them to shut down within two years because you can't be doing that on agricultural land," he said.

Paton said the eviction notice is one of the increasing numbers of land-use rejections farmers and others are facing, including denials for Halloween festivals, hay rides and roadside vegetable sales.

"Somebody has to take a look at a lot of these decisions made by the land commission," he said.

Agriculture Minister Lana Popham said she does not interfere in the decisions of the land commission. She added that the government is creating 1,500 additional women's shelter spaces.

"We're trying to make sure the Agricultural Land Reserve is strong and it's there for future food security," Popham said. "We also know there needs to be some flexibility."