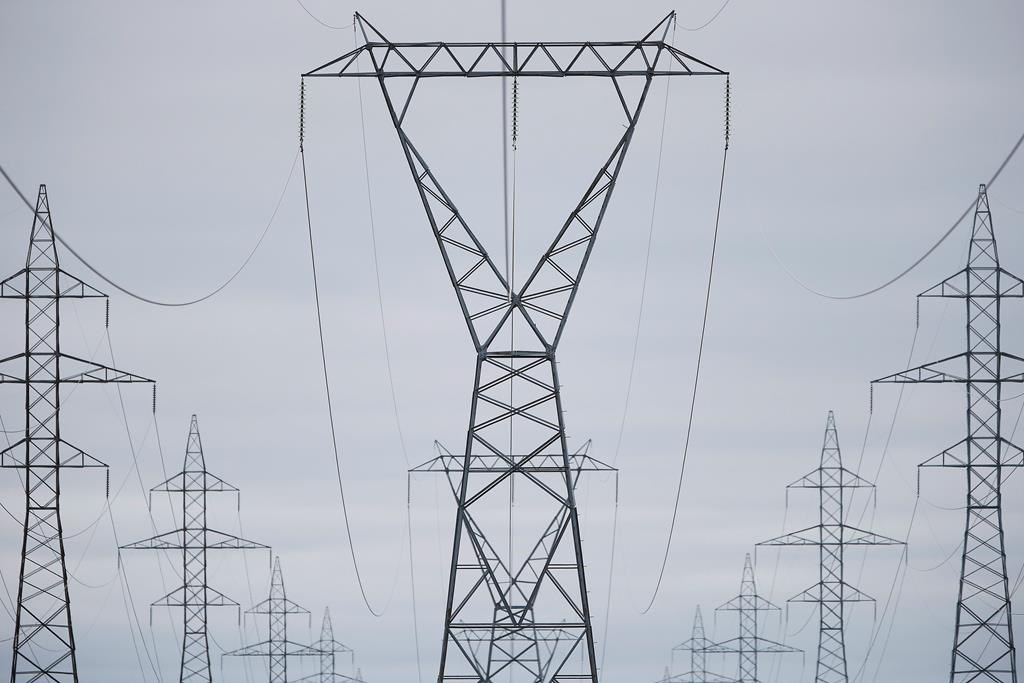 Manitoba Hydro power lines are photographed just outside Winnipeg, on Monday, May 1, 2018. File photo by The Canadian Press/John Woods
Previous story
Next story

A Manitoba Indigenous community is taking the province to court over a $453-million power transmission project it says it wasn't properly consulted on before construction started last summer.

The Sagkeeng First Nation is to argue in Winnipeg Court of Queen's Bench on Wednesday for a judicial review of the province's decision to give Manitoba Hydro a licence to build a 213-kilometre, 500-kilovolt line to Minnesota.

"When our ancestors signed the treaties, they agreed to share their land, not give it away," Chief Derrick Henderson said in a news release. "Manitoba and Hydro need to learn that they have to treat our people with respect. It is not respectful for Manitoba to treat First Nations as a nuisance to be disposed of in a sham consultation process."

The First Nation's lawyer, Corey Shefman, said construction should stop until the province meets its duty to consult First Nations which will be affected. The project should also go through the environmental approval process again, he said.

"You skipped some steps, Manitoba. You need to rewind this and go back to the part where you are consulting and accommodating Sagkeeng and the other First Nations,'" Shefman said. "Then you can make your licensing decision."

Construction began in August and the line is expected to be operating by June.

The province has said the line will displace more than 1.5 megatonnes of carbon emissions by removing the need for coal south of the border.

The Justice Department, saying in an email that its position will be presented in court, did not comment.

The utility has said conditions relating to Indigenous communities and groups affected by the project have been met.

The line, which will stretch from a point northwest of Winnipeg, down to and across the United States border, has been a source of friction between Premier Brian Pallister and Indigenous groups.

Pallister clashed with the Manitoba Metis Federation last year when he scrapped a $67-million negotiated agreement between the federation and the utility so that the Metis would support the line. Pallister called the deal "persuasion money" and the Metis filed for a judicial review of the decision to scrap it.

In response, nine of 10 Manitoba Hydro board members resigned. They said Pallister had refused to meet with them to discuss important issues, including Indigenous rights.

The transmission line received approval from Natural Resources Canada in June but was subject to 64 Manitoba licence conditions and another 28 from the National Energy Board. The conditions included ongoing participation for Indigenous groups

Chiefs of six southern Manitoba First Nations, including Sagkeeng, told a news conference that month that they would take action to stop construction until they were properly consulted.

Shefman said the other five communities, which are taking a different route to appeal, stand behind Sagkeeng.

The lawyer said any option that the First Nations have will be time-consuming and may not be decided before much — or all — of the construction is complete.

"It's not set up to be fair to First Nations," he said. "They need to accommodate the impacts of these money-generating, revenue-generating projects on Aboriginal and treaty rights.

"This is death by a thousand cuts for the First Nations in southern Manitoba and Sagkeeng has said: 'Enough is enough.'"