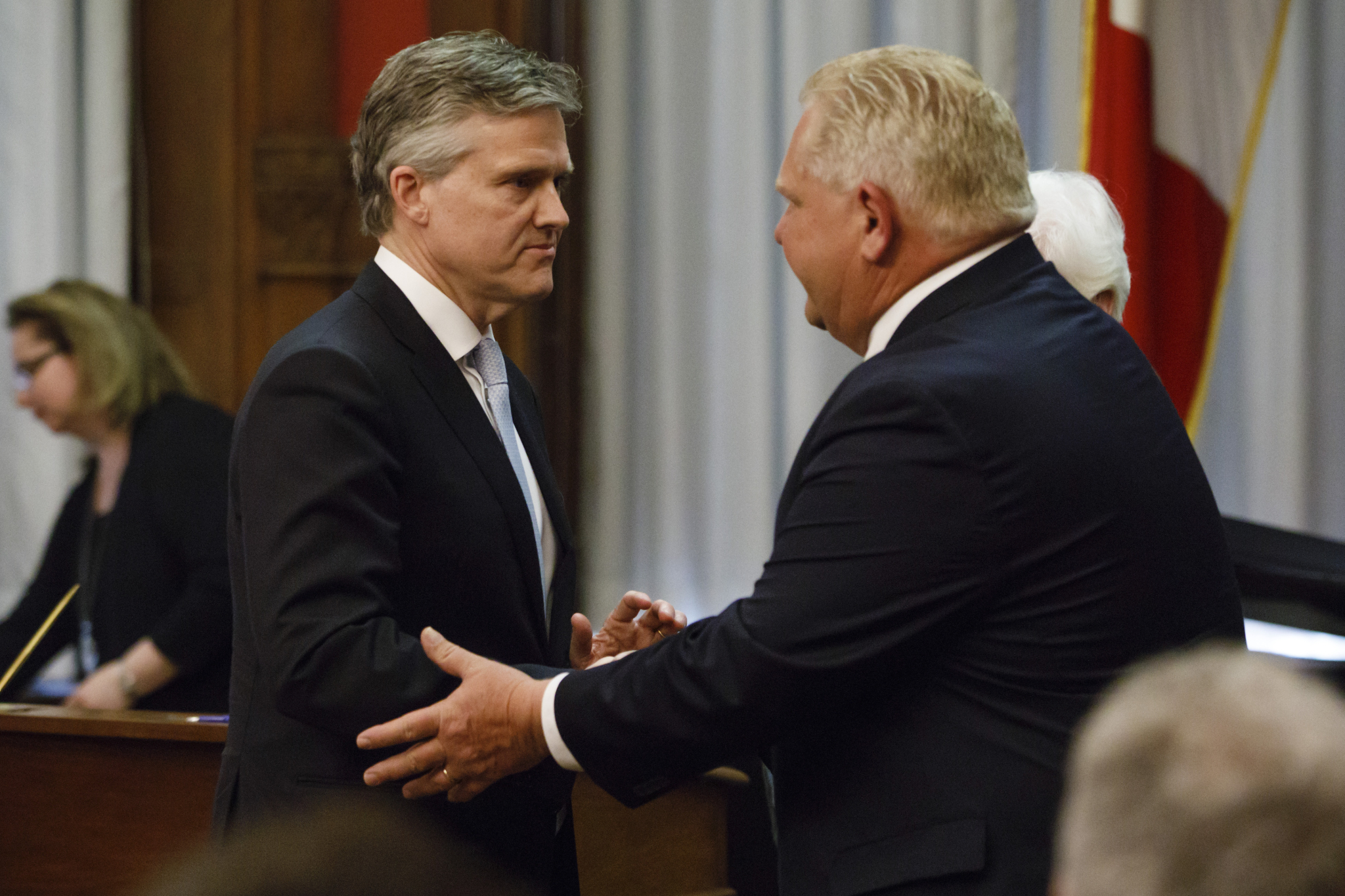 Rod Phillips shakes hands with Ontario Premier Doug Ford after being sworn in as finance minister during a cabinet shuffle at Queen’s Park in Toronto on June 20, 2019. Photo by Cole Burston
Previous story
Next story

Ontario’s budget deficit is set to widen this fiscal year compared to the last one, but Finance Minister Rod Phillips insisted the province’s finances are in better shape than when the Progressive Conservatives came to power.

The government of Premier Doug Ford held off on fresh spending cuts and promised a tax cut for small businesses in Wednesday’s economic update.

It also added $1.3 billion in funding across health care, education and social services, a partial reversal of steep cuts from its 2019 budget that prompted protests from parents and unions and led to a sharp fall in the government’s popularity.

The backtrack included $278.5 million to keep needs-based autism supports in place while a broader redesign is considered.

Phillips said the province’s deficit in the 2019-20 fiscal year was $9 billion, down from $10.3 billion predicted in the government’s budget earlier this year, largely due to higher-than-expected revenues. The fiscal year ends March 31.

That was far below the inflated $15-billion figure the Ford government initially said it inherited from the former Liberal government of Kathleen Wynne, which it booted from power in a June 2018 election.

But it was wider than last year’s deficit of $7.4 billion, according to the 2018-19 public accounts released by the province in September.

Opposition politicians questioned whether the government was artificially inflated the size of the deficit in order to justify spending cuts.

That September figure did not include a $1-billion reserve factored into the current year’s numbers, but even taking that into account shows a wider deficit.

“We are cleaning up the fiscal mess we inherited,” Phillips told the legislature after tabling the update. “So we can invest now in essential public services like health care and education.”

That’s not what it looked like from across the political divide.

“There is nothing in here, in this fall economic statement, that will give relief to people around hallway medicine,” NDP education critic Marit Stiles said, adding that the update “twists the knife even deeper when it comes to Indigenous affairs, when it comes to our environment, and when it comes to legal aid.”

“The government is still spending less per student and wants to drive that number even lower,” interim Liberal Leader John Fraser said.

The government is meanwhile proposing to reduce the corporate income tax rate for small businesses to 3.2 per cent from 3.5 per cent starting Jan. 1, 2020, and to form an advisory council on competitiveness. The tax cut is expected to save some 275,000 eligible businesses up to $1,500 a year.

(The regular provincial corporate tax rate is 11.5 per cent.)

Ontario, which has the world’s largest sub-sovereign debt, accounts for almost 40 per cent of Canada’s gross domestic product and is a major exporter of manufactured products — including autos — faces economic headwinds from high household debt and global trade disputes.

Despite the improved financial position, Phillips stuck with his government’s projection that it will not be able to balance the budget before the end of its mandate. It expects the province to be back in the black in the 2023-24 fiscal year.

“We listened to Ontarians,” Phillips told reporters in response to a question about whether the update was an admission of flaws in their spring budget. Phillips moved to the finance portfolio from environment several months after the budget was introduced. “We listened to what they thought was working well, and we listened as well to the concerns they have.”

The government again touted its “Made in Ontario” climate plan, but there was no mention in the update about the Ontario Carbon Trust, a planned flagship fund to support the private sector in developing clean technologies with $400 million over four years.

“They talk about an auto strategy, and they don’t even mention electric or low-emission vehicles,” Green Leader Mike Schreiner said.

A report released last month by Environmental Defence found the government has made little progress on its commitments to fight climate change, concluding "Ontario has taken no meaningful steps to reduce carbon pollution in the past year."

The government did say it has allowed businesses to immediately write off investments they make in certain kinds of clean-energy equipment, while also allowing them to immediately expense any investments in zero-emissions vehicles.

Meanwhile, the government said it intends to adopt a proposal by MPP Andrea Khanjin to establish an annual Day of Action on Litter beginning the second Tuesday in May, starting in 2020.

The fiscal plan also says the government will undertake a first-of-its-kind assessment of the effect climate change has on the provincial economy, infrastructure, communities, public health and safety and ecosystems.

“My fear is that the impact assessment is only going to grow, because the government doesn’t have any plan to address the climate crisis,” Schreiner said.

It will tender a formal request for proposals for service providers to conduct or participate in the assessment.

Editor’s note: This article was updated the evening of Nov. 6, 2019, to include responses from the NDP, Liberals and Greens.