How communities can build psychological resilience to disaster

By Nicole Westman | Features | November 8th 2019
#1145 of 1524 articles from the Special Report: Race Against Climate Change 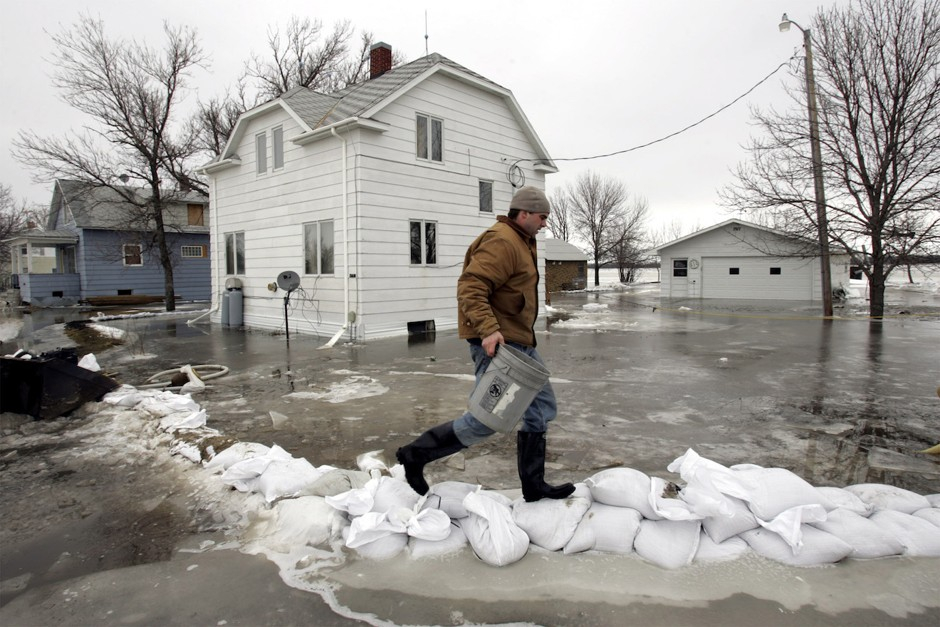 Justin Thompson walks on a sandbag dike as he carries a bucket of water to prime a pump and attempt to drain the water around his uncle's house south of Fargo, March 29, 2009. Experts say that taking practical steps, even small ones, before or during a di
Previous story

This story was originally published by CityLab and appears here as part of the Climate Desk collaboration.

The Red River runs north, up along the border between North Dakota and Minnesota, before spilling into Lake Winnipeg in Manitoba, Canada. Its water flows slowly through a 10,000-year-old glacial lakebed, in one of the flattest stretches of land in the United States, and because it points north, it’s sometimes blocked by ice jams—all of which makes the river prone to flooding.

In March 2009, one such flood threatened the city of Fargo. Residents watched for a week as the National Weather Service continually updated its predictions, and as forecasts for the river’s crest climbed higher and higher. At the time, the medical director of the state’s Department of Health and Human Services was psychiatrist Andy McLean, who also lived in the city. “I was trying to protect my home, and trying to protect the community,” he says.

Leadership in Fargo readied sandbags, led the construction of barricades, and planned for evacuations. But McLean had a key role, too. “Every day, I was the psychiatrist at the table, talking about the mental health of the community and of individuals,” he says.

That’s one reason why, despite record flooding, the city was able to escape major consequences: not only because of its infrastructural and physical preparations, but also because of its social and psychological readiness.

As climate change makes natural disasters more common and more extreme, cities and communities are working to improve their resilience—their ability to withstand disaster, and bounce back quickly when it occurs. But disasters don’t just cause physical damage; they can leave communities struggling mentally and emotionally, as well. Working to shore up physical structures only tackles part of the problem, says Gerald Galloway, a professor of civil and environmental engineering in the Center for Disaster Resilience at the University of Maryland. “If a community can’t stand on its own two feet psychologically, all the work on having stronger buildings isn’t going to get you anywhere.”

Research on communities affected by natural disasters shows that they often lead to spikes in mental-health challenges, particularly for people who face the most adverse impacts from the disaster or are already vulnerable in other ways. “It’s a mistake to just focus on the disaster itself,” says Susan Clayton, a professor of psychology studying climate change and psychological wellbeing at the College of Wooster in Ohio.

Studies done in New Orleans after Hurricane Katrina found that rates of mental-health conditions like anxiety, depression, and post-traumatic stress disorder (PTSD) increased in the aftermath of the storm. Those findings have been echoed in research on how people responded in the weeks, months, and years after other major disasters over the past decade. One survey of just under 700 people in the New York City area affected by Hurricane Sandy found that 33 percent likely had depression, 46 percent likely had anxiety, and 21 percent likely had PTSD. Preliminary data on people affected by Hurricane Harvey in Houston also found high rates of mental-health symptoms.

People with pre-existing mental-health conditions, other health conditions, and those closest to the center of the damage are more at risk for developing mental-health problems, as are older adults, who are twice as likely to have symptoms of PTSD than younger adults. But children are particularly affected by disasters: in one set of kids who evacuated during Hurricane Katrina, for example, over half exhibited mental-health symptoms, and more than 30 percent had clinically significant PTSD or depression. Children affected by bushfires in Australia had worse academic progress over the next few years than those who weren’t affected, one study of nearly 25,000 children found.

Many people, Clayton notes, will be just fine after a disaster, “even if they experience a traumatic event.” And for some people, living through a disaster can even spur what’s called post-traumatic growth: Individuals and communities come through stronger, mentally and emotionally, than they were before.

The goal in advance of a disaster is to take steps to mitigate some of the potential harms, and help more people experience long-term boosts, says Sonny Patel, NIH Fogarty Global Health Scholar at Harvard University. “How do we build communities to prevent some of these consequences? We know that there’s a psychological toll from these disasters—we want to find ways to create resilience to prevent some of that.”

Before the 2009 flood hit, the North Dakota team organized its work around a few principles of community resilience. It structured its messaging with the goal of communicating “hopeful realism”: recognizing that there was danger ahead, but stressing confidence in preparations. That helped build public trust in the civic groups making decisions. “Feeling like they are looking out for the best interests of the community is key [for confidence from the public],” McLean says.

Daily televised briefings kept citizens updated on preparations, and behavioral health professionals like McLean gave advice in those briefings on how people could prepare emotionally. Citizens got involved in mitigation efforts by filling sandbags, which allowed them to “act with purpose”: A study conducted after the flood showed that people who spent time volunteering had fewer risk factors for suicide, as it made residents feel like they belonged and were less of a burden to the community.

Fargo organizations, including nonprofit agencies, schools, and religious groups, also worked to strengthen connections between citizens, leaderships, and disaster-response groups. Inter-community connectedness is a critical element of resilience, McLean says. “One of the most protective factors is social connectedness, both for individuals and for communities. When people feel isolated, it’s a significant concern for having more psychological problems down the road.” In research on characteristics of resilient individuals, social support tops the list—people who fall into this category tend to have many people in their lives with whom they interact regularly, and who provide comfort and guidance, all of which protects against overwhelming stress. “Having a strong, supportive social network is one of the best things you can do,” Clayton says.

Taking practical steps to prepare for disasters has psychological benefits for individuals, Clayton says. “Informing yourself makes you feel a bit less overwhelmed. Having a concrete sense of what impacts you could see in your area does, as well.”

The U.S. outpost of the organization Save the Children runs a program called Prep Rally that helps build resilience in kids by teaching them about what it might be like to live through any type of disaster. “It pulls from a lot of research on adverse childhood experiences,” says Sarah Thompson, director of U.S. emergencies at the organization. “We’re giving kids a basic understanding of what could happen, and what safe places and people are. Even without knowing the nitty-gritty, it helps them feel like they’re more in control. It helps them feel like they can be safe.”

The program teaches them to recognize the risks they might face in their community, as well as practical skills, like how to talk with their families about evacuation plans and what should be in a disaster kit. By working with kids, the program also reaches the whole family, Thompson says. “Kids are great message-bearers.”

One key challenge in building a resilient community is ensuring that efforts are distributed equitably. “Individuals in poverty or who are more isolated are at more risk of psychological harm,” McLean says. People of lower socioeconomic status are already less likely to make preparations ahead of a disaster, are less likely or unable to respond to emergency communications, and are more likely to face major consequences from a disaster. Working closely with and directing support services for vulnerable groups, then, is an important element of resilience work.

Many organizations incorporate mental health into their conversations around disaster response: the American Psychological Association runs a disaster response network in partnership with the American Red Cross, which mobilizes psychologists to help victims and first responders after disasters. In addition, communities under a presidentially declared disaster can get funding from the Federal Emergency Management Agency (FEMA) to offer mental-health services.

In a few places, mental health is discussed as a component of disaster preparedness: In North Carolina, for example, the Department of Health and Human Services plans to measure social and emotional health in children as part of its strategic plan, which will be incorporated into preparations for future disasters. However, preventative discussions are less common, Patel says, and if it’s low on the list of priorities, funding can be limited. “It’s not the first thing people think about,” he says. “But it’s improved, and it’s getting attention.”

How humans kicked off the Pyrocene, a new ‘age of fire’

Of course the kids in the

Of course the kids in the fire area suffered learning difficulties. They were exposed to chlorpyrifos, and kids suffer more from the neural damage than adults ... and because of the nature of development being stage-specific and one stage dependent upon correct accomplishment of earlier ones, some of those problems will be more or less permanent.

Aaaackkk! Not chlorpyrifos ... same effects, wires crossed ... flame retardants used to try to protect buildings, etc., and to slow progression of fires.
My apologies for the error.