Western alienation: What was old is new again 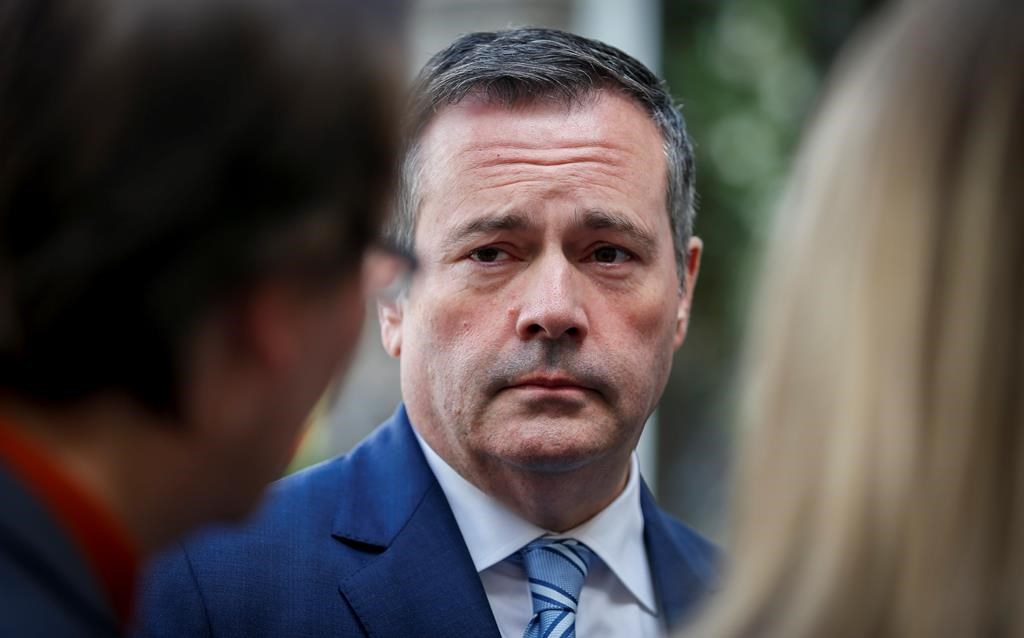 This weekend Alberta Premier Jason Kenney announced the creation of the Fair Deal Panel — a panel tasked with creating “Alberta’s strategy to secure a fair deal in the federation.”

The announcement Saturday came after weeks of elevated attention being paid not only to western alienation, but even separatist attitudes that have flared in the province.

In his announcement – which was made at the Alberta-based Manning Centre’s “What’s Next?” conference in Red Deer – Kenney said action was needed to address the ongoing costs to the province that have played out since the downturn of oil prices. He touched on everything from lower wages, increased rates of rural crime, closing businesses, people losing their homes, even a higher suicide rate, which has been linked to the unemployment rate.

“The wellspring of modern western frustration and anger lies in the original flawed articles of confederal union, and the key to our contentment lies in repairing those flaws,” Kenney said.

“Fixing them would be easy if they were merely some act of bureaucratic incompetence or political sabotage. But as generations of disaffected westerners can attest, the flaws are embedded in the economic structure of the federation, our national political institutions and often the complacency and condescension of the so-called Laurentian elites.”

With that, Kenney tapped the Manning Centre’s namesake and founder of the Reform Party, Preston Manning to the panel, alongside several current and former MLAs, a former Indigenous regional chief, a civil servant and Stephen Lougheed, an Alberta businessman and son of the still enormously popular late-former-premier Peter Lougheed.

The panel is mandated to explore several potential avenues of action, including the withdrawal of Albertans from the Canada Pension Plan, creating a provincial police force, and establishing a formalized provincial constitution.

But Kenney’s announcement of the Fair Deal Panel didn’t come out of nowhere. It is built on the sentiment of western alienation that has been simmering for years.

“Pretty much since the end of the election, there’s been a realization in the rest of the country, ‘Oh my god, there’s something going on in Alberta,’” said Duane Bratt, a political science professor and chair in the Department of Economics, Justice, and Policy Studies at Mount Royal University.

“The way I explain it to people is that the downturn has been long,” he said. “And it has been substantial. 150,000 jobs have been lost. And so while Alberta remains wealthier, it has been a very big shock to the system.”

The election results were devastating to many Albertans, Bratt said, including the premier who fought hard to keep Prime Minister Justin Trudeau from reelection, because many Albertans see Liberals as a “federal government going out of its way, to make a bad situation worse,” as Kenney phrased it Saturday in his address.

But this narrative of being out of step with Canada’s central-eastern region originated in a time long before the oil price downturn. In 1915 the Grain Growers Guide published a now-much-studied political cartoon, known as the Milch Cow, in which people from Alberta, Saskatchewan and Manitoba are shoveling hay for the dairy cow to eat, while people from eastern Canada milk the cow for all it’s worth.

“This narrative that the west is just designed to shovel resources to a rich central Canadian elite, this is as old as Alberta and Saskatchewan in Confederation itself,” said Melanee Thomas, an associate professor of political science at the University of Calgary, and a visiting fellow at the McGill Institute for the Study of Canada.

“This is very much a ‘they just want our money and we don't have access to power’ [argument].”

But Thomas points out that part of this simmering resentment has to do with how Albertans are educated about politics and grow to understand the province’s place in Canada.

“I remember being a kid in the early ‘90s singing a bastardized version of the Looney Tunes song that targeted Brian Mulroney and the GST. Nobody likes taxes, of course, but that we would sing this as elementary school children tells us how political socialization happens.”

And it’s all too convenient that the Liberals are currently piloted by the junior Trudeau, as a burning hatred for former Prime Minister Pierre Elliot Trudeau is another one of those nuggets that has been passed on over the years in Alberta.

The mandate of the Fair Deal Panel isn’t original either, as it closely mirrors the letter written by former Prime Minister Stephen Harper (before he was prime minister), with a handful of other political hands to then-Premier Ralph Klein.

The firewall letter, as it’s known now, urged Klein to pursue the “Alberta Agenda” using a variety of mechanisms, including taking a look at Alberta’s membership in the Canada Pension Plan and the tax transfer system. Sound familiar?

So while the latest federal election may have been the straw that broke western alienation back into Canada’s news cycle, it doesn’t come as a surprise to anyone living here. In the meantime, days after the Liberal minority government was elected, the Alberta government released its provincial budget.

In order to accommodate a corporate tax cut and an aim to balance the budget by 2022-2023, the United Conservative Party slashed spending by $1.8 billion over four years.

As a result of that budget, the Calgary Board of Education estimated that as many as 300 teachers could be laid off while student fees rise and class sizes swell. Public sector workers – including many healthcare workers – are looking at a battle to ward off the government’s proposed wage rollbacks of 2-5%. Income for the severely handicapped has been de-indexed from inflationary pressures, so they will now effectively be receiving less money every year. Guaranteed capital budget funding for municipal projects has been drawn out over longer periods — putting question marks beside projects such as Edmonton and Calgary’s light rail transit expansions.

Jyoti Gondek is a city councillor in Calgary and she says the situation in Alberta right now is dire. At the municipal level, she says it will be one of the most difficult budget cycles in decades. In terms of what this means for all Albertans hearing about the cuts, she shares the concern about what the future will look like in this province.

“I am one of the residents that's impacted by this. I'm worried about my kids ability to have a great education based on classroom size. We had an amazing announcement where we had the capital to build a high school that we've been waiting for, for over a decade. But now we're concerned: will it have the operating dollars that it needs? All of us are concerned,” Gondek said.

The “Wexit” movement was born at the confluence of the federal election, an oil downturn, an economic squeeze, a push for climate action and a global trend toward populist politics. Wexit is a group of people advocating for Western Canada to leave Canada and start anew. Their hats and shirts reading “the west wants out” and “make Alberta great again.”

“It’s not ‘western’, it’s Alberta and Saskatchewan,” Bratt said. “There is some sympathy in the interior of B.C. but I think that’s more the people in Prince George and Kelowna opposing the people in Vancouver.”

More than 700 people turned out for the Wexit rally in Edmonton earlier this month and the one in Calgary next weekend is likely to draw a sizeable crowd as well. But to Bratt, he thinks it’s easy to endorse the idea, but doesn’t suspect support would be maintained if the realities of separation were ever discussed in earnest.

“So yeah, can you get 700 cranky people into a bar in Edmonton? Sure you can. Can you do it in Calgary? Sure, you could probably get 2,000. But there’s 4.5 million people here who have [ties] right across the country — let alone the complications of divorce, the emotional attachment that people have to Canada.”

While Alberta is taking an axe to spending, on Friday, news broke that Quebec had posted a $4 billion surplus this year, coming out in the black for a second year in a row.

“Quebec is set to post massive back-to-back surpluses boosted by a strong economy, and is increasing spending as public finances tighten elsewhere in Canada,” the Globe and Mail article read.

That article was posted to the Wexit Facebook page. If you thought there was a more effective way of fueling anger, you’d be wrong.

“Quebec can go straight to hell and Alberta should go straight out of Canada,” one poster wrote.
“With or without the other four western provinces! Alberta must WEXIT!!”

Narratives about how Alberta foots the bill for equalization payments to have-not provinces (such as Quebec) spread like wildfire. All the sudden we’re back to the Milch Cow again.

The leader of the Wexit movement, Peter Downing, is a former RCMP officer and has in the past perpetuated conspiracies such as the idea that Prime Minister Justin Trudeau is “normalizing pedophelia, according to a report from Vice. An interview with Downing was requested but the National Observer received no response.

“I think anytime you have a situation where a number of people are out of work and they're worried about their future and their livelihood and their families, extreme thoughts come into people's minds,” Coun. Gondek said. “People are speaking out and acting out about feeling as though they've been completely disregarded. I don't think it makes any type of economic sense for us to separate. But this is a very, very loud and clear signal from people who are really angry and disappointed.”

So why a panel?

In light of all that’s going on in Alberta, what Premier Jason Kenney is trying to accomplish with the creation of the Fair Deal Panel is still hotly contested.

It could be that in earnest he wants to pursue some of these options to give Alberta more autonomy — but that could be costly for Albertans.

Or it could be to blunt separatist attitudes.

“What Kenney did was cut the knees off the Wexit movement,” Bratt said. “All of the proposals in the Fair Deal Panel have circulated in Alberta conservative circles for decades. Now we will debate them, again, with a high profile panel with the full weight of the provincial government behind it. If implemented, it would fundamentally reshape Alberta and Canada.”

Thomas thinks the timing of the panel helps distracts from the “broken promises” of the budget.

“Kenney is not an idiot. He's looking at this and being like, ‘how do I take economic voting off the table? I make it about Trudeau.’ And basically take this mother's milk, Western alienation socialization – and it's convenient that it's got a Trudeau name on it – and I just spike that all to make everybody really, really angry.”

And while Thomas says most Albertans are capable of seeing through the tactic, she thinks it’s causing more Albertans to feel disengaged and disconnected from the institutions that represent them.

Both Bratt and Thomas agree it’s also possible that the panel is an attempt at a negotiation ploy. Thomas says people should be outraged if the premier is just using this as a means of getting his way.

“I think it is a fair question to say: where are the adults in the room? This overheated bellicose rhetoric is not serving any good public purpose. There's a reason why Brian Pallister is speaking differently about this. There's a reason why Justin Trudeau is staying very quiet and trying to build bridges with cities,” Thomas said.

The panel will be proceeding with public consultations until the end of January and a completed report will be handed over to the provincial government by March 31, 2020.