Brewing battle over future of NATO creates minefield for Canada 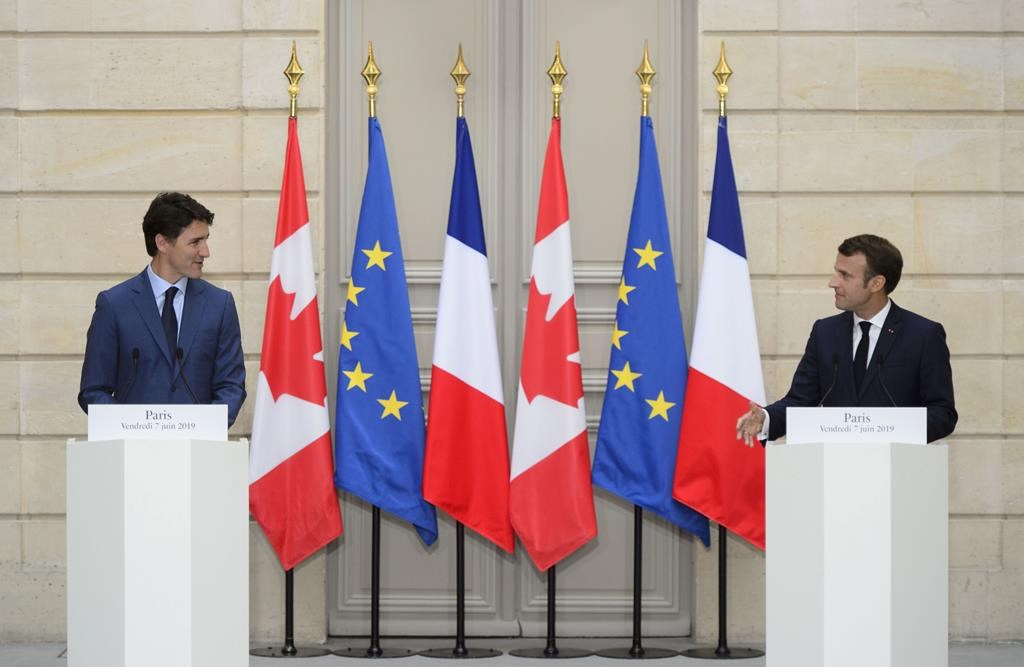 A brewing battle over the future of NATO could have major implications for Canada, which for decades has relied on the military alliance as a cornerstone of its security, protection and influence in the world.

Prime Minister Justin Trudeau is expected to travel to London next month where recent comments by French President Emmanuel Macron questioning the viability of the alliance threaten to overshadow a celebration of NATO's 70th birthday.

Macron, in an interview published in the Economist magazine, warned that NATO, which was established at the start of the Cold War to protect the democracies of North America and Western Europe from the Soviet Union, was suffering from "brain death."

The French president specifically cited the recent U.S. military withdrawal from northeast Syria and Turkey's subsequent invasion of the area — both without any consultation with fellow NATO members — as examples of a breakdown in the alliance.

The stark comments came as Macron warned that Europe must stop relying exclusively on NATO — which has been historically backed by American guarantees of protection — and prepare to defend itself.

Even before Macron's comments, there were questions over whether the U.S. under President Donald Trump would honour its historic promise to help defend another member that comes under attack given his "America First" philosophy.

Speaking to reporters Tuesday, NATO Secretary General Jens Stoltenberg said he planned to speak to Macron about his comments ahead of next month's leaders' summit even as Stoltenberg touted the importance of the transatlantic alliance and defended its record.

"NATO is the only forum that brings nations from Europe and North America together to address strategic security challenges," he said.

"NATO remains the only guarantor of European and transatlantic security. And it is the responsibility of each of us to maintain and strengthen our unity in order to ensure credible deterrence and defence for all of us."

Robert Baines, president of the NATO Association of Canada, credited the alliance with having maintained decades of relative peace and security in North America and Europe since the Second World War.

It is also through NATO that Canada is most active militarily today, with hundreds of Forces' members deployed on NATO operations in Iraq, Latvia, Romania, and the Mediterranean, as well as hundreds more scattered throughout the alliance's command structures.

Baines, whose organization's mandate is to raise awareness of NATO among Canadians, said he was genuinely concerned about the alliance's future — and the possible implications for Canada.

"I am hopeful, but very worried at the same time," he said. "We could be in this really awkward situation where we've got Macron's vision of a strengthened Europe worrying about itself, the U.S. increasingly worrying about itself ... and Canada left behind as America's hat."

Not that NATO's dissolution would leave Canada completely unprotected; the United States is Canada's most important military ally, with the two countries working hand-in-hand to defend North America from attacks by land, sea, air and even space.

But NATO represents an important "counterweight" to what would otherwise be an extremely lopsided Canada-U.S. defence relationship, said defence analyst David Perry of the Canadian Global Affairs Institute, because the alliance works on a consensus basis.

It also solidifies Canada's ties with most other western democracies, particularly at a time when the principles and values espoused by such countries appear to be under increasing threat. Together, NATO's 29 members spend more than $1 trillion on defence each year.

"NATO is a fundamental guarantor of western democracies' security, freedom and defence," said Perry. "It's a linchpin of both our — and our allies' — security, prosperity and defence in the world."

Canada has been criticized over the years for being among those allies not spending enough on defence, which has been a bone of contention for Trump, who wants all members to pay their fair share for collective security.

All NATO members agreed in 2014 to work towards spending two per cent of their gross domestic product on their militaries within a decade, but the federal Liberals planned to only spend 1.4 per cent of GDP by 2024-25.

While this could hurt Canada's efforts to champion the alliance, Baines suggested it is nonetheless well-placed to bring Washington and Europe together — and that saving the organization should be a priority.

"In some ways, I think Mr. Trudeau, if he could, should try to be that ideal Canadian archetype of the peacemaker and the bridge-builder," said Baines. "These are not things that we can allow to break NATO, these disagreements. We've got to find a way."

Can Justin Trudeau save NATO from 'brain death?'