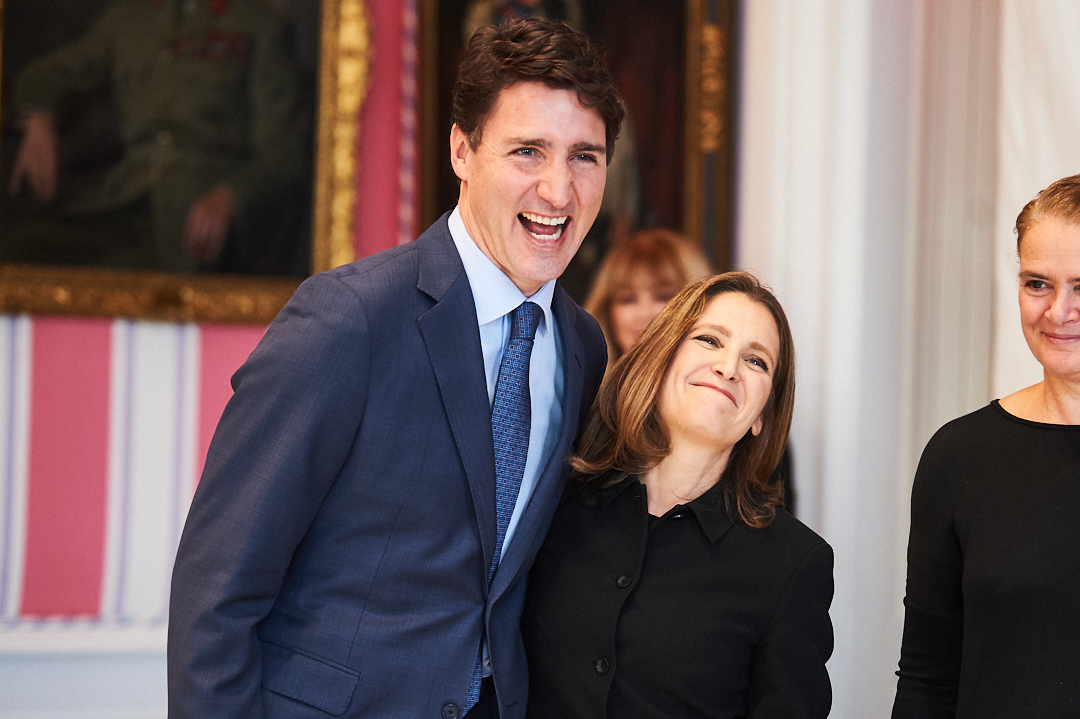 Four years ago, crowds were lining the roads to Rideau Hall, holding pictures of Justin Trudeau and watching video screens to catch a glimpse of the new prime minister. On Wednesday, the screens and adoring fans were gone, and the affair felt much more muted.

The 37 members of Trudeau's new cabinet, which grew from 35 in the previous ministry, were sworn in inside the "tent room" of the Governor General's residence on Wednesday afternoon. Afterward, ministers assembled outside the residence, braving the crisp November air, while Trudeau stood in front of them at a podium and took questions for about 20 minutes from reporters.

"I see it being very much a Freelandish role," Trudeau riffed, and his new cabinet chuckled behind him.

Freeland, Canada’s former top diplomat who by many accounts accomplished her prior marching orders to keep the North American Free Trade Agreement from being trampled on by the Trump administration, will take on an additional title of intergovernmental affairs minister. She is expected to turn her negotiating skills inward, confronting hot-button domestic issues currently facing the country. Taking over Freeland's former role in foreign affairs is François-Philippe Champagne.

"Chrystia and I have worked very closely on some of the biggest files facing Canada — Canada and the world, but particularly Canada and the United States," Trudeau said.

"Our ability to work well together on these issues, that quite frankly touch national unity, touch energy and environment, touch relations with all provinces and all regions of this country, is going to be an extremely important thing at a time where we see some very different perspectives across the country that need to be brought together."

Those regional issues made themselves apparent quickly, when the opposition Conservative party attacked Freeland in a statement issued shortly after the ceremony.

"After being shut out in Alberta, the Trudeau Liberals are desperately trying to spin Freeland as a passionate voice for the province," the Tories blasted. "However, no PR campaign is going to change the fact this downtown Toronto MP spent the last four years at the cabinet table signing off on anti-energy Trudeau Liberal policies."

Alberta Premier Jason Kenney congratulated cabinet ministers before suggesting that, "with no ministers from Alberta, I hope that ministers with portfolios of especially urgent interest to our province will listen to Albertans, take our concerns seriously and work constructively with the Alberta government to address them."

Joining Freeland in the Trudeau government's new domestic outreach approach will be Jim Carr, who was given the role of Trudeau's new “special representative for the Prairies."

Carr, who has been the international trade minister and hails from Manitoba, “will ensure that the people of Alberta, Saskatchewan and Manitoba have a strong voice in Ottawa,” Trudeau’s office said. The Winnipeg MP was diagnosed with a type of cancer shortly after last month's federal election but has said he plans to continue to serve.

Carr, Trudeau said, will be able to "engage with the Prairies in a strong and present way while at the same time sitting on a cabinet committee, at the same time as he faces significant health challenges, and which we wish him all the very best."

Catherine McKenna, who has commanded the environmental file since 2015, takes over infrastructure and communities. She is also expected to work on green infrastructure issues such as public transit and energy efficiency.

"We reflected, and we saw very clearly in this last election, that Canadians want action on climate change and Canadians also want to see us continuing to grow the economy," Trudeau said.

Wilkinson, who was first elected in his North Vancouver riding in 2015, had previously worked as the CEO of energy industry company QuestAir Technologies and BioteQ Environmental Technologies (now BQE Water Inc., which treats water for the mining industry) and as an executive at clean-tech company Nexterra, as well as at management consultancy Bain & Company.

“I’ve been really impressed with (Wilkinson’s) approach to both policy and politics,” Smith said. “He really drills down into the solutions — he doesn’t get stuck in the challenges.”

Wilkinson is a man who “understands that the energy transition is the greatest opportunity we have as a country, because he’s worked in it,” Smith added.

The organizers of the Youth Climate Strike welcomed Wilkinson but warned he must take the climate crisis seriously, “or face serious disruption to his government’s agenda.” The collective claims they brought out over 100,000 people in a recent Vancouver climate march.

Meanwhile, in a Wednesday morning interview on Radio-Canada’s Tout un matin, the Quebec director general of the David Suzuki Foundation, Karel Mayrand, said it is concerning that the prime minister did not appoint Steven Guilbeault — a co-founder of environmental NGO Équiterre who was elected as a Liberal in Montreal — to the environment portfolio.

Guilbeault, who also worked for Greenpeace Canada, was named Canadian heritage minister. He will oversee Canada’s cultural agencies, including the National Film Board and Library and Archives Canada, as well as the Canadian Radio-television and Telecommunications Commission, the country’s broadcast regulator.

“The first symbolic gesture this government is making is to hide the environmentalist at Heritage because we’re afraid to disturb Alberta,” Mayrand said. “What is troubling for us is the idea that, to appease Western Canada, we can’t put competent people in the right positions. Whereas conversely, if there was someone in the energy sector, for example, they would definitely be put (in an energy portfolio).”

Asked whether Guilbeault's appointment was made in order to avoid western anger, Trudeau replied in French that all his ministers "will have a lot to say about all the different issues around the cabinet table."

Guilbeault has "demonstrated a level of commitment on climate change and the fight against poverty and on social issues," he added.

The prime minister was also asked why he appointed Marc Miller as Indigenous services minister, in part because Miller had learned Mohawk (the government's handout biography of Miller included the fact that he delivered a statement in the House of Commons in the language) but did not put Guilbeault on the environment file using the same logic of familiarity.

"The decisions we make about cabinet are complex, and we choose the right people for the right places," Trudeau said again in French.

Guilbeault's job, he added, "is an enormous responsibility for someone who will be able to bear these values ​​and work with this Canadian identity, which is very dear to us and which reflects a great deal of concern about the environment."

Dale Marshall, who calls Guilbeault a friend and is national program manager at Environmental Defence, said naming him to the climate file would have been a stretch at this point in time.

“That would be a bit ambitious given that he's never been a parliamentarian,” he said. “And to take on such a lightning rod of a role would have been difficult not just for him, but also might have raised tension within this whole narrative that we're now having in Canada around climate change and oil and gas.”

Guilbeault and Miller were two of the seven new faces in cabinet, in addition to the many ministers who were shuffled. The other five new faces were public services minister Anita Anand, immigration minister Marco Mendicino, seniors minister Debra Schulte, northern affairs minister Dan Vandal and Mona Fortier, who is minister of middle-class prosperity and associate minister of finance.

The new role of Bernadette Jordan, as fisheries minister, puts her in charge of the largest coastline in the world.

First elected in 2015, Jordan assumes her new role months after a major overhaul of the federal Fisheries Act. Under new changes brought in with the passage of Bill C-68 in June, Fisheries and Oceans Canada will now be legally required to sustainably manage fish stocks and implement plans to restore depleted populations.

Previously, the Canadian government was allowed to authorize fishing without any limits, but the new provisions in the act will prevent actions that could affect endangered stocks.

According to environmental charity Oceana Canada, as of this year, only 29 per cent of Canada’s fish stocks are currently known to be healthy, a decrease from 34 per cent in 2017. The number of stocks considered to be critically depleted rose to 17 per cent in 2018, from 13 per cent in 2017.

The new legislation Jordan will oversee also brought back protections for fish habitats that the former Conservative government rowed back in 2012, and will require her department to incorporate Indigenous knowledge in its decisions and the mandates that it grants.

Bibeau, who won re-election in a sprawling riding in the Eastern Townships that is home to many farming communities, inherited responsibility for a sector embroiled in international controversy.

In March, China revoked canola shipment import licences for two companies as part of a diplomatic spat following Canada’s arrest of a senior Huawei executive at the request of the United States. Canadian canola exports are down 9.3 per cent in the 2018-19 grain year, and farmers have been left in search of other markets to make up for the loss.

Gould had been at the forefront of the fight against disinformation and misinformation and had often sounded notes of disappointment with social media platforms over their efforts to self-regulate.

That file now falls to Dominic LeBlanc, who became president of the Queen’s Privy Council for Canada. LeBlanc appeared at the swearing-in ceremony in a surgical mask as he is recovering from cancer treatment and has weakened immunity.

Bardish Chagger, who has led the government in the House of Commons, became diversity and inclusion and youth minister, a new title for the prior role of multiculturalism minister. Navdeep Bains, who has been the industry minister under a title that has lacked the word "industry," gets the word back as innovation, science and industry minister.

Jean-Yves Duclos, who had been social development minister, is the new president of the Treasury Board. Helping out Duclos will be Joyce Murray, who is digital government minister. Her file has traditionally sat within Treasury.

— with files from Sarah Lawrynuik