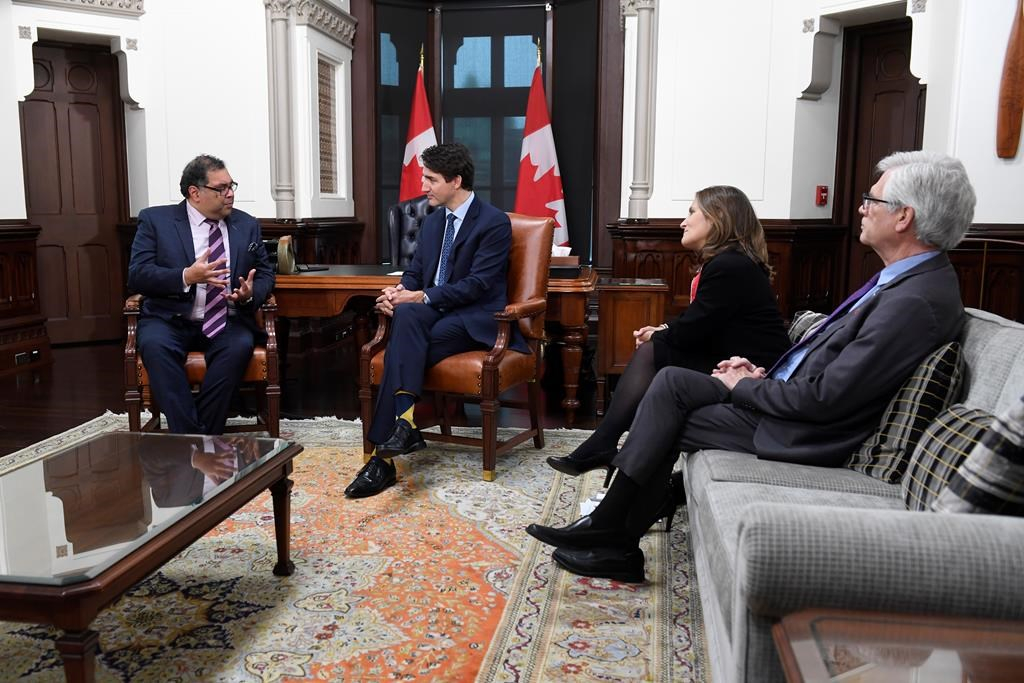 Prime Minister Justin Trudeau quickly backed up his pledge for more dialogue with the West, opening his Thursday meeting with Calgary's mayor up to the two members of his government now entrusted with being ambassadors to the region.

Manitoba MP Jim Carr, who was named Wednesday as Trudeau's special representative for the Prairies, and Chrystia Freeland, now deputy prime minister and minister of intergovernmental affairs, both sat in on the latest of Trudeau's meetings with provincial and municipal officials from Western Canada in the wake of last month's election.

The Liberals lost all their seats in Saskatchewan and Alberta in October. They also dropped three seats in Manitoba.

Carr, who was previously the minister for trade diversification, was also to attend Thursday's first cabinet meeting, before embarking on his new task from Trudeau: making sure voices from the Prairies are heard in the capital.

"The message is we have to do a better job listening, communicating, sharing and developing a set of regional policies that fit into the strength of our federation and the objective is that there be a strong Western Canada in a united Canada and I think that's my mandate," Carr said.

One existing policy, however, is at the heart of much of the west's anger: Bill C-69. It's a contentious piece of legislation overhauling the environmental assessment of major projects, which critics argue will further strangle natural resources development in red tape.

Calgary Mayor Naheed Nenshi said the group had a blunt conversation about the bill, but Trudeau did not promise anything specific.

"(Trudeau) said that he is interested in improving the system, and improving C-69," he said.

"That means that I will continue to be a thorn in his side to make sure this thing works better."

A statement from the Prime Minister's Office said Trudeau reaffirmed his commitment to work collaboratively with Nenshi to support Calgary's economic recovery.

The leaders also discussed progress on Trans Mountain expansion, where about 2,200 people have been hired to work on the project.

"The leaders discussed shared investments in infrastructure and agreed on the importance of moving forward on these projects to ensure the residents of Calgary and all of Alberta benefit from the economic growth and environmental protections that these projects promise," Thursday's statement read.

Trudeau's discussions with Nenshi followed a meeting the prime minister had last week with Saskatchewan Premier Scott Moe, where Trudeau first signalled his willingness to address the legislation.

But while Nenshi, and others, would like to see it amended, that's unlikely. The Liberals intend to try to tackle proposed changes via regulation and how the bill's provisions are eventually implemented.

While Carr and Freeland will bear responsibility for collecting and forwarding feedback from the West, primary responsibility for the legislation falls to the new environment minister, Jonathan Wilkinson. He took over the portfolio in Wednesday's shuffle.

He said the meat of the law is policies and regulation.

"We've always said we're open to conversations with stakeholders across the country as to how that's going to be done in the most effective way," he said.

The Calgary mayor warned about the fragility of national unity and that "careless words, and careless thoughts," if left unchecked, "could easily rend asunder what has taken generations to put together in this country."

Vancouver Mayor Kennedy Stewart also met with Trudeau on Thursday morning, but he said there was no talk of western alienation.

Instead, Stewart said the two spoke about ways federal programs and funding could help Vancouver with the opioid crisis, affordable housing and transit issues.

"That's what I'm here to deliver and I don't want to get the winds of Wexit blowing me around," he told reporters.

He said other western leaders issuing tough talking points to the Trudeau Liberals should realize that they're going to have to co-operate with the federal government on things like transit and housing funding for municipalities.

"Get over yourselves, get down to work, help your residents, get stuff built," he said.

This report by The Canadian Press was first published Nov. 21, 2019.