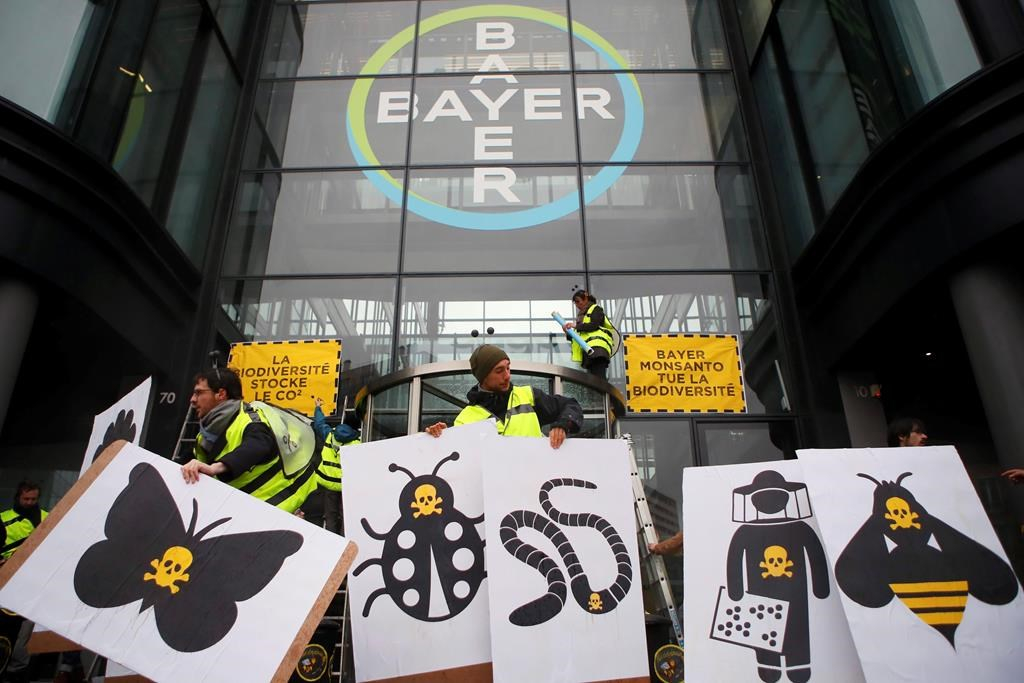 French activists of Attac stand in front of the Paris headquarters of Bayer AG to protest its production of environment-damaging pesticides in la Garenne Colombes, suburb of Paris, on Mar. 14, 2019. File photo by The Associated Press/Francois Mori
Previous story
Next story

Lawyers for a group of Canadians affected by cancer they blame on exposure to a weed killer have filed three proposed class-action lawsuits against the product's manufacturer, alleging Bayer and Monsanto knowingly endangered lives.

The untested statements of claim filed in Ontario, Alberta and British Columbia allege the German pharmaceutical giant and its subsidiary acted with reckless disregard for the safety of Canadians by selling Roundup, echoing claims in a string of international suits that Bayer and Monsanto have denied.

"I stand here before you with several representative plaintiffs in the class whose lives have been dramatically and permanently altered due to the actions of the defendants," lawyer Jeremy Diamond said Wednesday. "Other individuals have unfortunately already passed away due to cancer, and their estate is involved in this litigation."

Together, the three suits — which were filed in June and have yet to be certified as class actions — are seeking more than $500 million in damages.

An arm of the World Health Organization classified the active ingredient in Roundup, glyphosate, as a probable cause of cancer in 2015, but Health Canada has stood firm on its decision to allow its sale.

The suits allege that Monsanto "ghostwrote" scientific papers submitted to Health Canada that suggested the product was safe.

"We believe the defendants withheld the risks of cancer and other health risks by secretly ghostwriting scientific journal articles provided to Health Canada," Diamond said.

"Studies that were provided to regulatory authorities in relation to the product safety were falsified, misleading and included manipulated control groups," he said. "It is also our belief that the defendants negligently tested the product and failed to warn of the risks."

The ghostwriting allegation was also made in an American court in 2017 and backed up by internal emails.

In July, Bayer said roughly 18,400 Americans had filed suits against Monsanto over Roundup. Several U.S. courts have ruled against the company.

A spokesperson for Bayer Canada said in a written statement Wednesday that it was aware of the suits, and the company intends to "vigorously defend" its products.

"While we have great sympathy for the plaintiffs, glyphosate-based herbicides are not the cause of their illnesses," the company said. "We firmly stand behind the safety of glyphosate-based products and as a company devoted to life sciences, assure Canadians that their health and the environment are our top priority."

Health Canada did not immediately respond to a request for comment.

The Canadian lawyers said their representative plaintiffs weren't exposed to any other likely carcinogens, suggesting Roundup was more likely than not the cause of their cancer.

One of those plaintiffs, John Peter Williams, an 83-year-old former apple farmer, said he used Roundup on his farm in Colborne, Ont., for decades before developing a rare form of cancer in his lymph nodes in 2014.

Peeling back his collar to reveal a large patch of purple skin, which he said was caused by radiation, Williams said he endured years of radiation and chemotherapy before enrolling in a clinical trial that appears to have worked.

"I continue to live as I've always tried to live, but it's been difficult," Williams said.