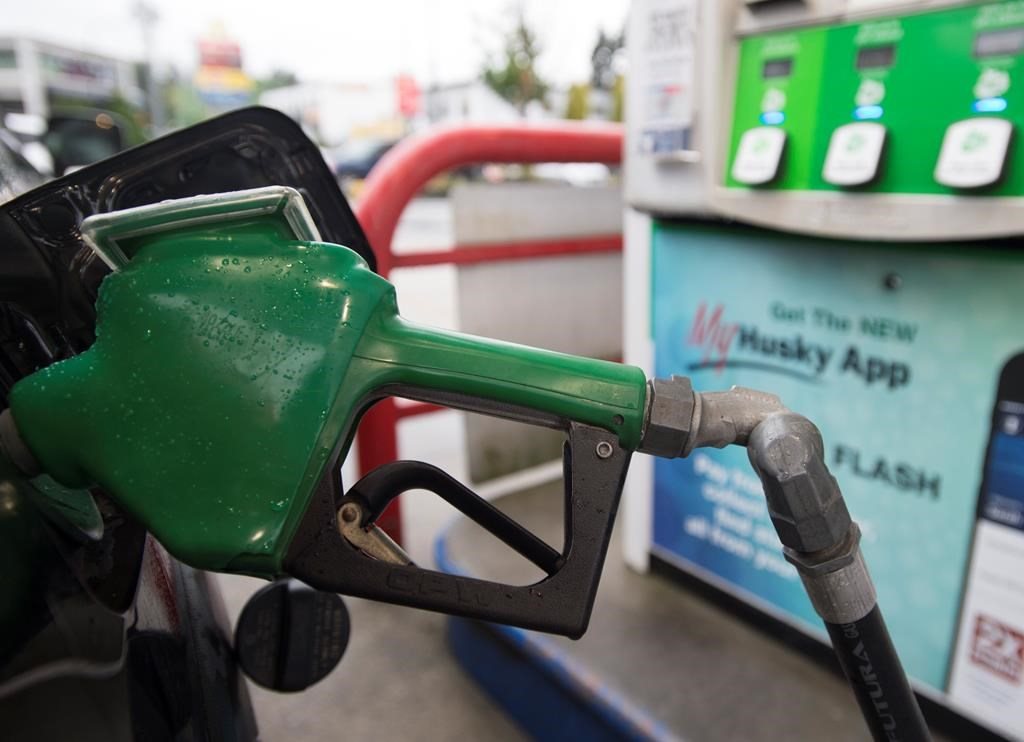 A car is fuelled up at a gas station in Vancouver, on Wednesday, July 17, 2019. File photo by The Canadian Press/Jonathan Hayward
Previous story
Next story

The Ecofiscal Commission says quadrupling Canada's carbon price by 2030 is the easiest and most cost-effective way for the country to meet its climate targets.

But the independent think-tank also warns that might be the toughest plan to sell to the public because the costs of carbon taxes are highly visible.

The commission is issuing its final report today after spending the last five years trying to prove to Canadians we can address climate change without killing the economy. The report looks at the options for Canada to toughen climate policies to meet the 2030 goal of cutting greenhouse-gas emissions by almost one-third from where they are now.

The choices include raising the carbon price, introducing new regulations and adding subsidies to encourage and reward greener, cleaner behaviour.

The report concludes that all of those can reduce emissions but that carbon pricing stands out for doing it with the lowest cost to consumers while permitting the most economic growth. It adds that the economic benefits of carbon pricing become even greater if the revenues are returned to Canadians through corporate and personal income-tax cuts, rather than direct household rebates as is done now.

Commission chair Chris Ragan said hiking the carbon price $20 per year between 2022 and 2030, until it hits $210 per tonne, would get Canada to its targets under the Paris Agreement on cutting emissions. That would be on top of the $50-a-tonne price on carbon emissions that will be in place by 2022.

The federal price, in provinces where it applies, is at $20 per tonne now, and is going up $10 a year in each of the next three years.

Rebates would also grow to keep the tax revenue-neutral, the commission said.

The federal Liberals have promised to review the carbon tax in 2022 to determine what happens to it, but have been noncommittal about what that might be.

Canada's federal tax is only applied in provinces without equivalent provincial systems. Right now those are Saskatchewan, Manitoba, Ontario and New Brunswick. Alberta will be added in January.

"It's crazy to use high-cost policies if you know that lower cost policies are available," he said. "Why would we do that?"

Carbon prices can include fuel taxes and cap-and-trade systems where emissions are restricted and credits must be purchased to emit anything beyond the cap.

Regulations can be either very specific, such as requiring agricultural producers to capture methane from manure or cities to capture methane from landfills, or broad, such as telling industrial emitters they have to find a way to cut emissions in half by a certain date. Subsidies can mean helping people or companies install more efficient lighting and appliances or to buy electric vehicles.

Canada's current policies are a mix of all three.

Under the Paris accord, Canada committed to cutting greenhouse-gas emissions to 511 million tonnes by 2030. In 2017, the most recent year for which data is available, Canada emitted 716 million tonnes.

A year ago, Environment and Climate Change Canada said its existing platter of policies leaves the country 79 million tonnes short. Earlier this month the international Climate Transparency organization said Canada was among the three members of the G20 group of big economies that are least likely to hit their 2030 climate targets.

So let's get ON with it.

So let's get ON with it.

Just goes to show how much

Just goes to show how much the rest of us are going to pay to allow the fossil fuel industry to expand and make profits. I would think the pressure on Canada to make its commitments will increase substantially very soon. The big talk and small actions we're getting standard from our political 'representatives', aren't going to cut it for much longer.