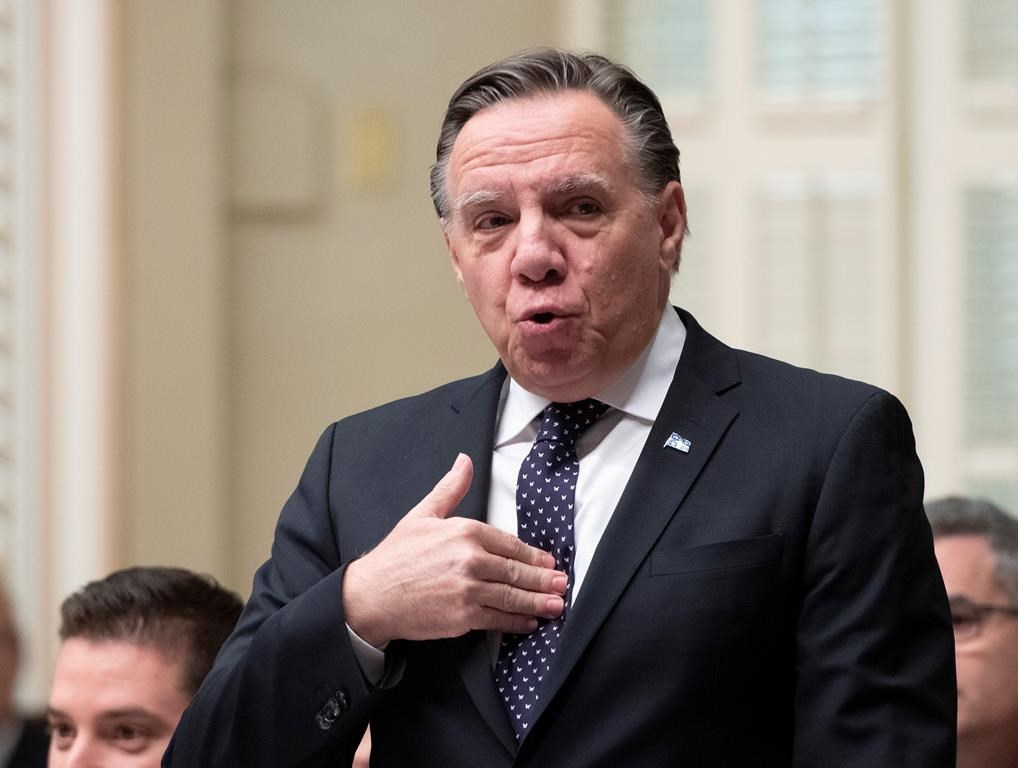 Quebec Premier Francois Legault responds to the opposition, during Question Period on Wednesday, November 20, 2019 at the legislature in Quebec City. File photo by The Canadian Press/Jacques Boissinot
Previous story

Manitoba's premier would be better off spending money on French-language services or retaining NHL players than trying to woo Quebec civil servants to the Prairies, Quebec Premier Francois Legault said Thursday as he shot back at his counterpart's latest criticism of his province's secularism law.

Brian Pallister's government recently announced it is rolling out a series of newspaper and electronic advertisements in Quebec that welcome government workers to move to Manitoba if they feel threatened by their province's ban on religious symbols in the workplace.

The ads reference "21 reasons to feel at home in Manitoba" — a reference to Quebec's Bill 21, which was passed into law earlier this year. The legislation prevents state employees in positions of authority, such as teachers, judges and police officers, from wearing religious symbols such as hijabs or turbans on the job.

On Thursday, Legault retorted that Pallister would be better off investing the money elsewhere.

"I think this money would have been better spent for French services in Manitoba," Legault said in Quebec City before taking a shot at the Winnipeg Jets' lineup.

"I think Mr. Pallister must work to keep his own people in Manitoba — like Dustin Byfuglien with the Jets," he said, referring to the complicated relationship between the NHL team and its veteran defenceman, who was suspended without pay by the Jets after he failed to report to training camp in September.

It's not the first time the two premiers have publicly disagreed over Quebec's religious symbols law.

In July, Pallister said he would send letters to professional organizations, colleges and other entities in Quebec to invite public-sector workers to move west.

He criticized the legislation again this week, saying Manitoba is looking for more bilingual civil servants and has no intention of policing what they wear.

"Here in Manitoba, we have respect for diversity," Pallister said in an interview Wednesday with The Canadian Press.

"We respect personal freedoms and rights, and we're not big on clothing police here."

Pallister and his Progressive Conservative government also introduced a resolution in the Manitoba legislature that promoted the rights of public servants and other people to exercise religious freedom.

While the resolution did not specifically mention Quebec, it expressed opposition to "any law that seeks to unjustifiably limit the religious freedoms of citizens, including passing a law that unjustifiably denies an individual's right to wear religious clothing or symbols of one's choice."

On Thursday, Legault repeated his assertion that Quebec's secularism law is moderate, arguing that some European countries have imposed even stricter bans. He asked whether Pallister planned to take out ads in those countries, too.

"Will he do the same thing in Germany, in France, in Switzerland, in Belgium, where they have the same kind of law?" he said. "I have a tough time following Mr. Pallister."

When asked if he was worried that the ad campaign would be successful, Legault answered simply: "No."

This report by The Canadian Press was first published Nov. 28, 2019.