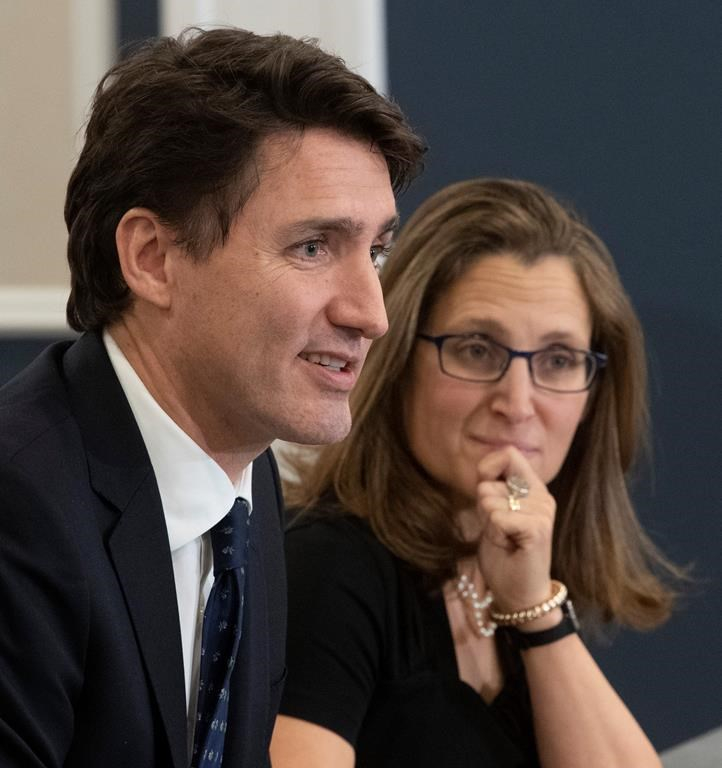 Deputy Prime Minister and Minister of Intergovernmental Affairs Chrystia Freeland looks on as Prime Minister Justin Trudeau delivers opening remarks to the Federation of Canadian Municipalities in Ottawa, on November 28, 2019. Photo by The Canadian Press
Previous story
Next story

Canada's cities say the federal Liberals are willing to find creative ways to remove political roadblocks from provinces to fund billions in municipal projects, a sign of hope that comes as they ask Ottawa for more money and new ways to fund local work.

Prime Minister Justin Trudeau, his deputy Chrystia Freeland and other newly named cabinet ministers have given "very clear signals" about easing the flow of funds as part of their conversations with city leaders, said Edmonton Mayor Don Iveson.

Iveson's comments came near the end of the Federation of Canadian Municipalities' conference in Ottawa this week, which included a meeting with Trudeau and Freeland on Thursday afternoon.

The federal government has options to make the money move, Iveson said, pointing to the doubling of the gas-tax funding this year, which the Liberals called a one-time arrangement to do an end-around on problematic provinces.

The Trudeau Liberals will have to lean on provinces to remove hurdles — political or otherwise — that hold up federal spending and, in turn, local construction plans for things like affordable housing, said Iveson, who chairs the federation's caucus of mayors from the largest cities in Canada.

"If there's an opportunity to do the right thing and help reduce demand for a costly provincial public service, surely provinces can come to the table and be partners," Iveson said Thursday.

"And if they're not, then the federal government needs to use all the tools in its toolkit to drive them back in to productive nation-building conversation."

What the country needs, he said, is "courageous leadership" from all levels of government.

Cities are also hoping for billions in new spending and potential new powers.

On Thursday, the federation released its wish list for the first 100 days of the Trudeau government's second mandate.

The document urged the Liberals to boost annual increases to the gas-tax fund to 3.5 per cent from two per cent, and permanently double the value of the program to just over $4 billion.

The group also wants the government to eliminate caps on funding for transit rehab projects, allow other spending to upgrade council chambers and administrative buildings, and add $2 billion in new spending for projects that help communities adapt to climate change.

It's also asking for tens of billions in new spending commitments, including $34 billion for transit over 10 years once the current agreement runs out in 2028.

Trudeau said the Liberal campaign platform was in part inspired by the priorities the federation laid out, and that their ideas would continue to inform his party's approach to governing — even with a sharply divided electorate and minority Parliament.

"After all, we're all serving the same people — Canadians from coast, to coast, to coast, who expect us to do right by them," Trudeau said during brief remarks before meeting behind closed doors with the group's leadership.

Infrastructure Minister Catherine McKenna told the gathering of municipal leaders on Wednesday that getting projects built quickly is her top priority, a nod to criticisms the Liberals face about the slow trickle of federal dollars for approved projects — some of which is beyond the government's control.

Bill Karsten, president of the Federation of Canadian Municipalities, said the people he represents on Halifax city council care more about results than the process governments take. He also said opposition parties have been open to the group's suggestions, but would not reveal which ones.

Ray Orb, who speaks for the federation's rural members, said the Liberals must keep rural Canada in mind to ensure smaller communities have reliable internet access, for instance, and don't miss out on disaster-mitigation money.

This report by The Canadian Press was first published Nov. 28, 2019.

This is very good news.

This is very good news. Cities are where the vast majority of our citizens live. Cities are on the front lines of fighting climate change, and cities are a lot better at it than most senior governments. Many have already achieved double digit reductions in emissions through zoning for multiple uses with higher densities, often near transit to provide reasonable alternatives to driving cars, and independently increased local building code standards with respect to energy efficiency.

Cities are the primary economic engines of the nation where the top ten generate 70% of the country’s wealth. Compare that to the eight per cent generated by the entire oil and gas industry (and that’s on a good day says the Bank of Canada). Yet the provinces and feds remove almost all of the tax revenue generated within cities, giving back a pittance. In Metro Vancouver that amounts to a whopping eight cents return on every dollar removed.

Cities are usually forced to provide a quarter to a third of the funding for transit projects with less than 10% of the tax revenue they create. That is untenable, and this fiscal imbalance helps illustrate why Canada is so far behind most other advanced democracies in reducing its egregious per capita emissions and breaking the cycle of automobile and fossil fuel dependency. Building fast, frequent transit networks in and between our cities and marrying them to efficacious land use planning, urban design, architecture and engineering together amount to a powerful climate-fighting instrument.

Benjamin Barber wrote an illuminating book in this topic entitled ‘Cool Cities’ which proposes that cities band together and share resources and develop policy initiatives to fight climate change. He recognized that it is too often provincial / state and federal governments that hold cities back from acting to protect their own citizens from the effects of global warming (floods, fires, particulate pollution from smoke …) let alone incompatible activities like fracking and drilling within some urban boundaries. This is accomplished in two ways: limiting or withholding funding; and legislating away municipal bans on fracking and other deleterious projects. Barber cited the work of individuals, independent cities acting alone, and organizations like C40 Cities.

It was not lost on Barber and the mayors he talked with that senior governments would be greatly diminished if large cities kept more of the benefits from the economic activity created within their own boundaries. During her run for mayor former Toronto chief planner, Jennifer Keesmaat, floated the idea that the GTA should consider declaring itself its own city-state after new premier Doug Ford arbitrarily reduced city council to 25 members for a population of over 6.5 million. Many saw that as an act of vindictiveness after he previously lost his bid for mayor. She didn’t win the mayor’s seat either, but the point was made that it is unwise to continue to abuse the most important economy in the nation which generates in the range of $350 billion a year, virtually equivalent to Albert’s entire GDP.

Similarly, former BC premier Christy Clark forced Metro Vancouver (but tellingly no other urban region) to hold a referendum on funding transit expansion through a completely reasonable 0.5% tax increase, and imposed an unreasonably short time for the local 21 mayors and the regional transit authority to respond. They did the best they could amidst what amounted to mob rule in the results where the city vs. suburb divide was keenly demonstrated with the suburban No tallying more than the urban Yes on voluntarily accepting a tiny tax increase to bring on badly needed transit infrastructure. Subsequent polling indicated a general malaise with politics, and a referendum on anything was an open door to express anger. However, the last laugh goes to the Metro. The real referendum followed — a provincial election — and Clark’s condescension toward the big city resulted in the loss of nine urban seats in the Metro, and ultimately her premiership. The lesson again was, don’t mess with a city that provides half the wealth of the province. The irony is that new governments were put in place shortly after in both BC and in Ottawa with a more sophisticated understanding of urban needs, and a welcome relief from the previous condescension, and more funding was realized for major transit and housing projects during their first terms. It is not enough, but progress was made.

All this, of course, leads to the Constitution which places cities in the purview of the provinces who today are clearly laggards in protecting the well-being of their own citizens in the face of climate change and urban issues, like housing and the opiate crisis. That provision was composed back in the 1800s when confederation was just being cobbled together as the central law that glues together vast, sparsely populated regions without thought of the advent of mature cities. Cities today are more powerful than they think and have every right to push for a Constitutional amendment to bring the law into modern times. Is there any other option short of revolts where larger portions of tax revenues are withheld from senior governments? That would be so unCanadian.