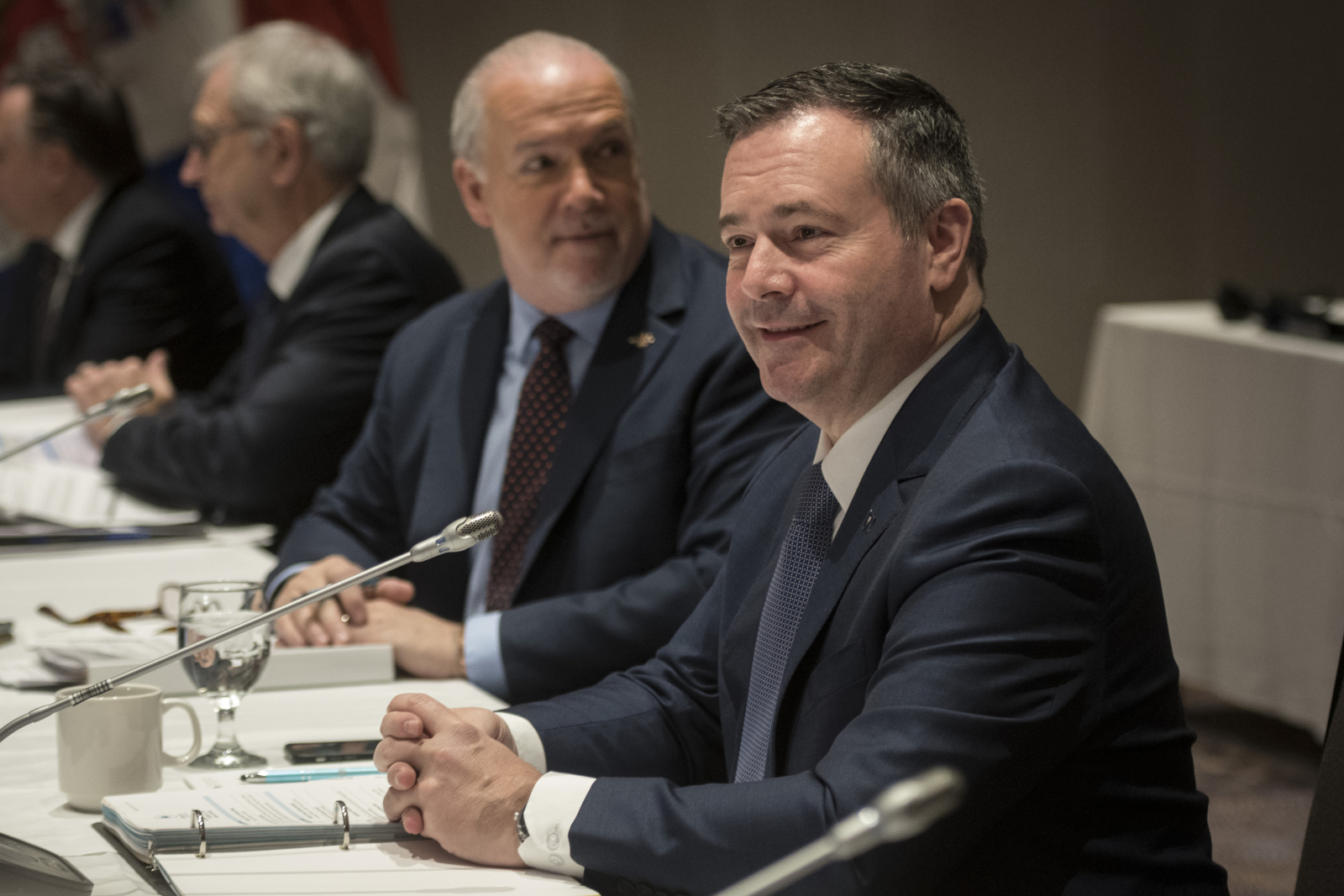 After meeting in the Greater Toronto Area on Monday, the leaders of Canada’s provinces and territories made a rare show of unanimity in calling on the federal government to provide more help to energy-producing provinces during tough times.

The Council of the Federation asked Ottawa to consider changes to the Fiscal Stabilization Program, which provides financial aid to provinces that undergo sudden economic disruption, so that more federal funds can be directed to parts of Canada negatively impacted by volatile global energy markets in recent years.

It was a major win for Saskatchewan Premier Scott Moe, who chaired the meeting behind closed doors, and Alberta Premier Jason Kenney. The leaders of the country's Prairie provinces, which boast significant resource economies, expressed gratitude to their fellow first ministers.

"Let me thank my colleagues here for showing they understand the adversity folks in Alberta are undergoing," said Kenney, at a joint press conference at the Hilton Toronto Airport Hotel in Mississauga, a Toronto suburb. "I have been trying to convey to Albertans that we are not alone."

Funding under the stabilization program is currently made available to any province whose annual non-resource revenues decline by more than five per cent. But revenues from resources must decline more than 50 per cent before being factored in.

As a result, energy-rich Alberta was eligible for only $250 million under the program in the 2015-16 fiscal year, even though its total revenues fell by $7 billion over the same period. Around the same time, from January 2015 to October 2016, the province's employers cut over 130,000 payroll jobs.

Premiers agree on a suite of demands

In a joint message, the premiers asked that the government make the Fiscal Stabilization Program "more responsive to economic circumstances and downturns in resource sectors" and suggested changes including the removal of a per capita cap of $60 and retroactive payments to cover the last five years of volatile crude prices.

Moe said the request represented a moment of unity in the Canadian federation.

"They have our backs, and we will have theirs," he said, seated next to his fellow premiers.

The premiers also called on Canada to develop its natural resources "in a responsible manner" in order to boost the country's economic competitiveness, and asked that development projects be subject to a "one project, one assessment" policy, under which all resource development falling under provincial or territorial jurisdiction would be exempt from mandatory federal impact assessment — a direct challenge to the controversial federal bill C-69, which Kenney and Moe have both said will hinder resource development.

On health care, the premiers reiterated an earlier call on the federal government to increase federal health transfer payments by 5.2 per cent annually. Regarding the new funding, Manitoba Premier Brian Pallister objected to the idea of a national pharmacare program in the short term.

"Don't start broadening health care when you can't get it right now," he said.

British Columbia Premier John Horgan, who has previously said he would be "delighted" to see a national pharmacare program, noted that the funding increase was needed more urgently for frontline care.

The premiers also asked for more flexible infrastructure funding, including an expedited approval process. Ontario Premier Doug Ford's negotiating team, in particular, had championed the infrastructure file during the session.

Lastly, they called on Canada to undertake "significant nation-building" activities in the three Northern territories, including greater supports for climate action to fight and mitigate rapid changes to the environment in the North.

Monday's meeting, the first for the Council of the Federation since the October federal election, provided a stark contrast to federal-provincial tensions that have emerged since. Moe and Kenney, in particular, have clashed with Prime Minister Justin Trudeau over natural resource policies, namely the federal bills C-48 and C-69.

Discord has also erupted among the first ministers. Kenney has sparred with Quebec Premier François Legault over federal transfer payments, while he and Horgan continue to be at odds over the construction of the Trans Mountain pipeline extension.

While Monday’s proceedings were generally loose and gregarious, a moment of tension emerged when they were asked at a joint press conference about Quebec's controversial Bill 21, which bans public sector workers from wearing religious symbols and has been criticized for being discriminatory.

Pallister has strongly criticized the legislation, going so far as to take out advertisements in Quebec inviting members of the public service from religious minority communities to move to Manitoba. Ford's government also recently passed a motion calling for the repeal of the legislation.

The weekend before the meeting brought one significant energy policy announcement from three of the leaders in attendance.

On Sunday, the premiers of Ontario, Saskatchewan and New Brunswick announced they had signed a memorandum of understanding to develop nuclear reactor technology in Canada.

Their provinces will work on the research and development of small modular reactors (SMRs), which they said could help provinces reduce their carbon emissions and reduce reliance on non-renewable energy sources. SMRs are nuclear fission reactors that are smaller than normal reactors, and that can be assembled more easily.

Ford, Moe and New Brunswick Premier Blaine Higgs estimated that a Canadian market worth $10 billion, and a global market of $150 billion, could eventually form around the technology, which isn’t expected to deploy widely for another five to 10 years.

“I was very proud to see my premier join two others and say, we feel like emissions reductions is a goal we should all share about in Canada,” said Mike Holland, New Brunswick’s minister of energy, in an interview. “In the election cycle that has just passed where discussions were about divisions, it was very good to see three provinces together talking about a subject as important as the reduction of emissions.”

Holland said the memorandum was written in a way that leaves it open to other provinces if they wish to join.

“If they feel like working in collaboration on nuclear, that it would be a good thing for the country and for the globe, there is always a chair at the table,” he added.

So....the Western Provinces will have our back. Yeah, does anyone remember how they did that in the’70’s?
As I recall, the general view of Alberta’s government back then was “Let the Eastern bastards freeze in the dark” when the Trudeau (senior) government implemented the National Energy Policy. How times change...

This political puppet show by

This political puppet show by fossil fuel frontmen premiers is disturbing in its promotion of false premises like don't do pharmacare just give us more money to "fix"' the system-- when lack of access to prescribed treatment is a major factor in the system being a revolving hospital only door and pharmacare part of the solution to LOWERING costs and improving outcomes for CITIZENS (not taxpayers).
Why is there no loud challenge to the porkies these guys spout? the fossil fuel cabal's fairytales of endless pipeline economic magic that ALL serious financial investors know is rocketing towards being stranded assets? Where's the counter argument they must address of develping fuels of the future? Where's the "remember when" Harper deliberately trashed manufacturing sector in Ontario to benefit Alberta fossil tar sands and Ontario lost 400,000 good manufacturing jobs over a few years (the Dutch disease)----Please challenge this maniac telling wild distortions of facts!!!!!!
My one comfort is that Kenny and Moe are so extreme in their good-governance-destroying mission that it reads like panicked flailing around. Where is the calling out of their lies and extremism that could literally tear the country apart??
I want to hear a reporter ask Kenny why he won't bring in a tax like every other "normal" province to boost provincial coffers by $13 Billion a year , pay down their deficit and remove the "need" for his brutal and utterly discredited austerity plans. and insist on an answer from this snivelling whiney con man.

Thanks for this, Valerie. I

Thanks for this, Valerie. I was unaware that Harper was responsible for the loss of manufacturing jobs in Ontario, that was meant to benefit the Tar Sands Industry.
Do you have a reference that you could post?
I’d really appreciate it.

This is obvious if you lived

This is obvious if you lived through it.

Why do we in Canada continue

Why do we in Canada continue to rape and pillage our resources and give them away to multinationals for free. Norway nationalized it’s resources and now has a trillion dollar royalty fund. Alberta is bankrupt and wants the REAL western province to allow a pipeline and therefore tankers to potentially destroy our coastline. Actually it’s not Albertans but it’s the foreign oil companies that now own the resource that want the TMX. We have to get off this path of allowing other countries and corporations to use us for free resource extraction. Cheerio from the BC coast.

You're so right Susan. And

You're so right Susan. And why did Mr. Horgan vote in favour of removing federal reviews of these projects? Surely the effects of one provinces resource exploitation affect other provinces.

https://albertathedetails.blogspot.com/2019/06/billl-c-69-and-conservati...
https://albertathedetails.blogspot.com/2019/06/bill-c-48-and-conservativ...
Bill C69 stopped the export of 2/3 of the peace River to the US. Bill C48 got rid of all the garbage that messed up dealings on the Trans Mountain pipeline. Got rid of legislation that allowed the minister to overturn any deal made. This stopped the pipeline deals effectively. Why? The US does not want us shipping to China and indonesia off our west coast.

So now we are calling a

So now we are calling a bailout "aid"? How many do they need? And why are we not calling this corporate welfare?? Conservatives (mostly) were quick to jump down the throat of govt when the Westons needed to update some capital equipment. Get off your high horse. Biggest hypocrits, manipulators and outright liars.