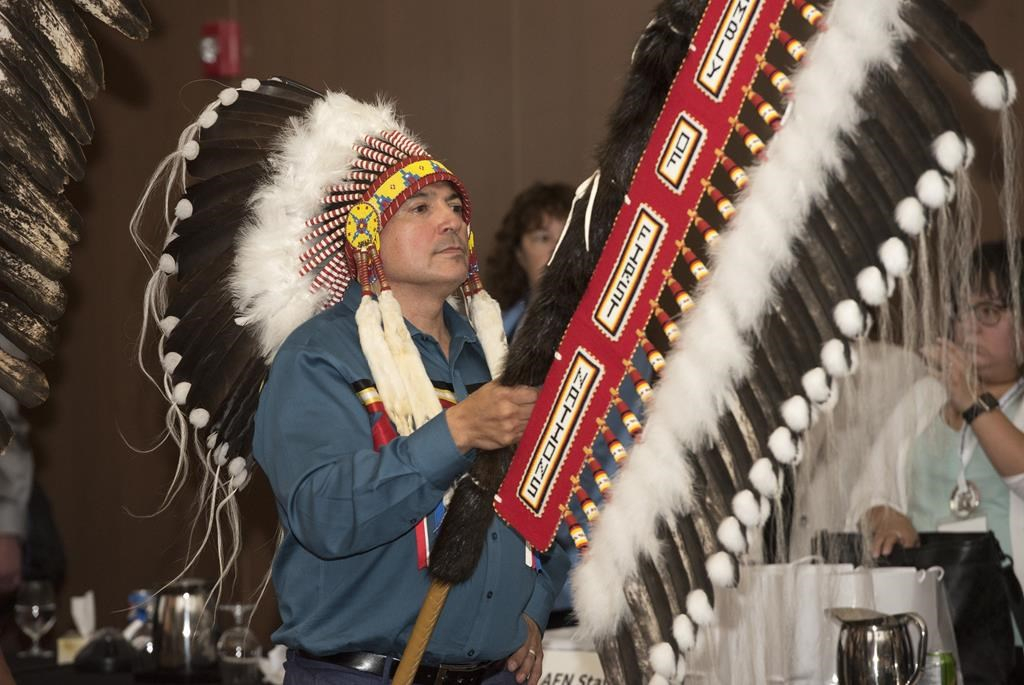 National Chief of the Assembly of First Nations Perry Bellegarde marches in the closing ceremony of the AFN's Annual General Assembly in Fredericton, N.B., on July 25, 2019. File photo by The Canadian Press/Stephen MacGillivra
Previous story
Next story

The national chief of the Assembly of First Nations is calling on the federal government to make up a national suicide-prevention strategy for young people, with a suicide crisis gripping a First Nation in northern Saskatchewan.

Speaking to a special assembly of chiefs from across Canada that began this morning in Ottawa, National Chief Perry Bellegarde said action must be taken to stop Indigenous youths from feeling so hopeless that they are resorting to self-harm.

"We know that too many of our young ones are taking their lives. And so we say to those young people that you're special, you are gifted and you're loved. Never forget that," Bellegarde said.

"We do call on this government to finally work with (our) leadership and families and people to finally implement a youth-suicide-prevention strategy. That is needed — one that supports all of our young people."

The Makwa Sahgaiehcan First Nation at Loon Lake, Sask., has raised concerns in recent weeks about “cluster suicides” in the community, about 360 kilometres northwest of Saskatoon.

Band leaders say eight people, mostly youths, have tried taking their lives since the First Nation declared a state of crisis in mid-November.

That came after three deaths by suicide, including one of a 10-year-old girl, over three weeks.

Speaking on behalf of the AFN's youth council, Rosalie LaBillois broke into tears as she talked about her concern for young Indigenous people not only in Saskatchewan, but across Canada.

"We want to commit to making changes for our young people. Because, as leaders, I don't believe we're just here to look pretty. I want to get stuff done. I want to tell you the hard, cold truth that's happening in our communities," she said, as a number of chiefs surrounded her in support.

"Our communities, our homelands, are facing something that's very dark."

Bellegarde also called for more aggressive action on climate change as a way to offer more hope to young people.

Despite almost daily scientific reports being released painting a dire picture for the future of the planet if greenhouse-gas emissions continue to increase, Bellegarde said he believes there is a reason to hope for a positive outcome if governments are willing to work with First Nations on real climate action.

"The time is now for bold vision and decisive action," Bellegarde said.

"Their future is in all of our hands and they (youth) are telling us we all need to do better."

The assembly of chiefs is to discuss political strategy and policy on key issues, including the Trudeau government's pledge to implement a bill harmonizing Canada's laws with the United Nations Declaration on the Rights of Indigenous Peoples.

Events this week will also include conversations among the chiefs and their designated delegates about safety and security concerns for First Nations women, since a national inquiry found earlier this year that violence endured by Indigenous women across Canada amounts to genocide.

Climate change, fiscal relations, economic and social development as well as inherent and treaty rights will also be up for discussion.

Saskatchewan chief saddened by lack of help to stop suicides