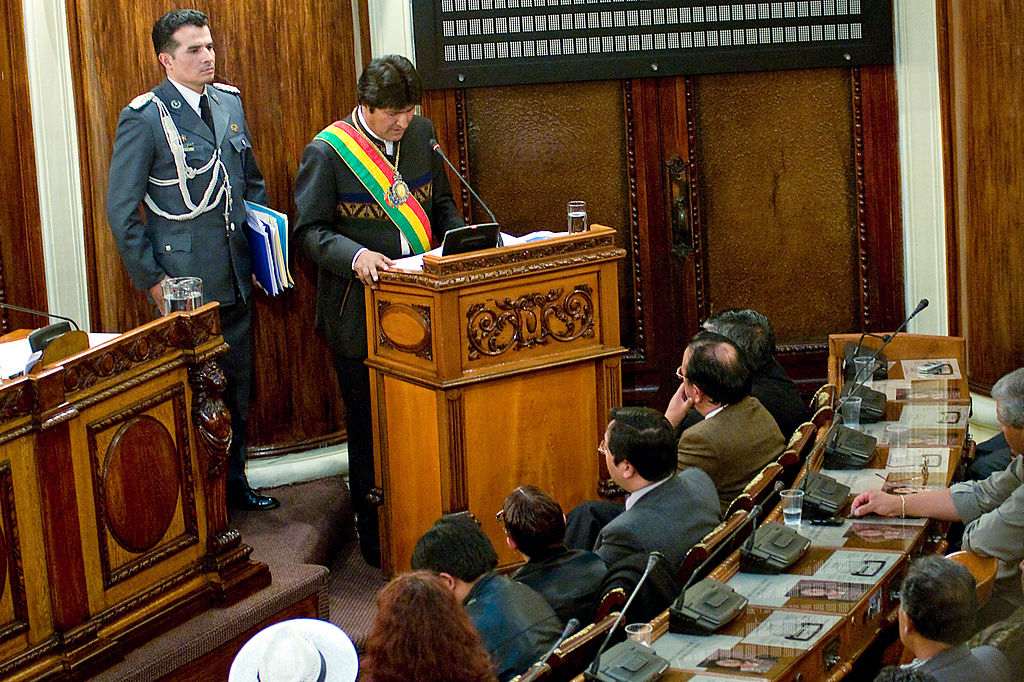 Evo Morales, who resigned as president of Bolivia and sought asylum in Mexico amid political turmoil earlier this month, repeatedly proclaimed himself a guardian of “Pachamama,” also known as Mother Earth. Photo by Joel Alvarez (Joels86) [CC BY 3.0]
Previous story
Next story

Evo Morales, who resigned as president of Bolivia and sought asylum in Mexico amid political turmoil earlier this month, repeatedly proclaimed himself a guardian of “Pachamama,” also known as Mother Earth. But to some indigenous Bolivians, his relationship with the planet is a complicated one.

Indigenous people form a majority in Bolivia. The two biggest groups, Aymara and Quechua, have roots in the Andean highlands, while the remaining 34 are from the lowlands, an area that includes the Amazon rainforest. As Bolivia’s first indigenous leader — his family is Aymara — Morales vowed to fight for Bolivia’s indigenous communities by amplifying their voices and advocating for their cultural values, including the value of protecting land and nature.

María José Bejarano De Oliveira, an 18-year-old member of the Chiquitano nation in the eastern lowlands, was one of many indigenous Bolivians who bought Morales’ promises. “Since we were tired of the traditional politicians who governed our country with false promises of substantial changes in social, economic, and cultural aspects that were not kept, the choice was made to believe in the supposed Aymara indigenous leader,” De Oliveira told Grist in Spanish in an email.

But when it came to the environment —and especially the Amazon — Morales’ actions were at odds with his rhetoric. When raging fires blanketed vast swaths of the Amazon a couple of months ago, much of the world focused on Brazil and its far-right leader, Jair Bolsonaro. But in Bolivia, more than 4.2 million acres of land were up in flames. To many frustrated environmentalists and Bolivians, there was only one person to blame: Evo Morales.

Morales, a former coca farmer and llama herder, did have many environmental wins during his presidency. In 2010, he hosted a climate change conference in the city of Cochabamba and passed Bolivia’s Law of Mother Earth, the first law in the world to recognize nature’s rights as equal to human rights. He also sponsored a successful U.N. resolution to recognize access to clean water and sanitation as human rights. He even brought forth an ambitious climate pledge for the Paris Agreement.

“In the first stage of his administration, we thought that he would fulfill his campaign promises to defend the indigenous people of Bolivia and Mother Earth,” said De Oliveira. “But it’s clear that in terms of real-life actions, he didn’t fulfill them.”

Morales’ image as a defender of Pachamama took a turn in the months before his ouster. In July, a month before the fires began, Morales signed legislation that weakened restrictions on land-clearing fires in the Bolivian Amazon. The law encouraged slashing and burning to create arable land for cattle ranching and soy farming. He even sent “migrant farmers” from his own tribe to occupy the eastern lowlands.

The move might seem surprising, given his rhetoric on protecting the environment. But Morales had his eye on agribusiness as a means to boost the country’s economy. His government aimed to make Bolivia a global food supplier so that agricultural commodities could join petroleum gas as a key Bolivian export.

In just a few weeks, farmers and ranchers — through the practice of “controlled burning” — burned nearly 2 million acres of forest in protected reserves. When Bolivia’s dry season arrived in August, the flames got less controlled. Burning and drought are something of a vicious cycle in Bolivia: increased burning restricts the climate’s ability to recycle precipitation, which in turn leads to severe droughts and a heightened risk of disastrous wildfires.

In early September, protestors took to the streets of Bolivia demanding that Morales declare a national disaster. Some chants even went as far as calling him a “murderer of nature” for not taking immediate action on the fires. Most of the protestors came from indigenous groups living in and near the Amazon. According to one source, who didn’t want to be named for fear of retaliation for himself and his organization, many of the protestors “felt betrayed” by their country’s first indigenous leader.

Then, in September, when the Amazon was still ablaze, Morales gave a speech at the United Nations General Assembly in front of world leaders, delegates, and the press, expressing his love for Pachamama. “Our house, Mother Earth is our only home, and it is irreplaceable,” he said. “Increasingly, it is suffering from more fires, more floods, hurricanes, earthquakes, droughts, and other disasters.”

Many Bolivians saw hypocrisy. “In practice, his speeches were false and his actions spoke the opposite of his speeches,” said De Oliveira, who was also at the U.N. as a delegate representing the Confederation of Indigenous Peoples of Bolivia.

Soon after the blazes in the Amazon came Bolivia’s contested presidential election, in which Morales declared victory after an unexplained pause in vote-counting. Protests broke out, and Brazil, the United States, and the European Union urged Bolivia to hold a run-off election, which Morales agreed to. But then the Bolivian military pushed Morales to resign due to political unrest.

Now that he’s been ousted, indigenous Bolivians find themselves in a different kind of trouble. Jeanine Añez, the right-wing politician who has named herself interim president, has a history of discriminatory statements about indigenous Bolivians. In a 2013 tweet, which has since been deleted, the then-senator said in Spanish, “I dream of a Bolivia free of satanic indigenous rites. The city is not for the Indians who should stay in the highlands or the Chaco!!!”

Since installing herself as president, Añez has accused Morales of “terrorism” and allowed the nation’s military to open fire at pro-Morales protesters for any cause, leading to dozens of deaths and hundreds of injuries.

Happening now in #Bolivia. Anti-coup protests arrive in La Paz. After more than a week of protests and dozens killed by regime forces, demonstrators demand the de facto leader step down. https://t.co/z6yJg5KQwv

It’s unknown whether the interim administration will fulfill Morales’ climate commitments and environmental policies. Morales always made sure Bolivia was represented at international climate conferences. Bolivia is currently planning to send a delegation to Madrid for the 2019 United Nations Framework Convention on Climate Change, also known as COP25, in early December. But much is in flux in Bolivia at the moment after Añez signed a bill annulling the earlier vote and allowing for new elections.

All De Oliveira and other indigenous activists know is that they will continue fighting for their rights and for the environment, which they see as intertwined. “We demand that this new transitional government sign commitments” to domestic and international environmental agreements, said De Oliveira. “A solution to the … violations and assaults of our lands should be based on the values and customs of the indigenous people.”

Eve Andrews assisted with translation for this story.

This article leans excessively heavily on the opinion of one interviewee (de Oliveira). It's not clear if Grist's reporter (Ramirez) is reporting from Bolivia--or simply using comments recorded at the UN meeting in September. All in all, not really worthy of National Observer.

I am really disappointed that

I am really disappointed that you would publish a biased article that does not accurately portray Morales record and seeks to blame him for the Amazon fires ( which is different than saying he did not do enough to stop them.) Morales overstayed his welcome. The real issue now is not what Morales did or did not do but what his opponents are now likely to do to harm indigenous peoples, and the environment

Like many National Observer readers, I "lost faith" in the Trudeau government when it did an about-face on its climate change commitments to spent billions of dollars for a pipeline project... but I certainly don't welcome a military coup to get rid of him (and ultimately serve the same interests that promote pipelines!).

The readiness of this article to i) accept the motives of the Bolivian military engineering the coup as responding to "public unrest"; ii) question the results of the election showing unquestioned strong support of Morales; and then iii) wonder what the "new" formally illegitimate Anez government will do to protect the environment speaks of serious editorial weakness and is disappointing to see in the National Observer.

There is certainly room to question shortcomings of governments that present progressive promises but don't deliver - and a pressing need to draw lessons from this. But one must be very careful of the context in which this is discussed - especially when coups are being undertaken. For a fuller discussion of this point and what is at stake, I recommend reading 'Oppose the Military Coup in Bolivia. Spare Us Your “Critiques” ' (https://www.counterpunch.org/2019/11/14/oppose-the-military-coup-in-boli... )

I have just finished reading

I have just finished reading “How indigenous Bolivians lost faith in Evo Morales after the Amazon blaze by Rachel Ramirez.
I can not believe the National Observer published this article.
I prefer to think it is a total lack of knowledge of the region or a problem with translation, than thinking it is part of the media and law fare in place.
The Plan Condor II is in progress all over Latin America. It is a very sensitive moment in the region after what suffered under Plan Condor I in the seventies. The use of climate change as a smoke screen can not be accepted to cover up a political agenda in the media.
The elected president of Bolivia was forced to resign in a middle of a coup.
Now International Human Right organizations are asking the UN to review the OEA with its wrongful brief about the elections that kick off the coup. Today OEA change their position and declared it was a coup.
Bolivia and its people, specially the indigenous are in a blood bath, unarmed , murdered, kidnapped, tortured as a way to discipline the aboriginal people of the neighbours countries.
Anybody can see in FB the fear and terror of indigenous people. Sometimes they tape the horror in search for help to the international community while a genocide is on the fields, killing the vulnerable,
https://www.facebook.com/leonardo.fabre.7/videos/1267829400090920/UzpfST...
I am a Canadian citizen living in Ontario, so Morales actions about the fire on the Amazon can be a subject of discussion and research to me, no certainty. What is not under discussion are the results of his 13 years of administration based on BID info.
% # 2006 #2017
Unemployment 4.50
Inequality reduction 28.00
Poverty population 59.00 36.00
Indigence 0.36 17.10
Middle class 35.00 58.00
GDP 4.20
Infant mortality 5.00 2.40
Illiteracy 23.00 2.70

It was worldwide published that he biggest fire control plane with capacity for 75,000 lts was hired by Morales administration and arrived on August 23th , 2019 to control the fire on Chiquitania, where more than 700,000 ha were burnt in 20 days.
I am a subscriber of the National Observer and I have seen the tapes coming from Bolivia, where indigenous people are under massacre, I can not be silent facing the mistakes done with this article.
Please do not use climate change as smoke screen right when Secretary of State Mike Pompeo on Monday December 2nd, issued a bombshell declaration concerning US Latin America policy, vowing Washington’s support to countries facing mass protests and unrest ( Latest Today News)