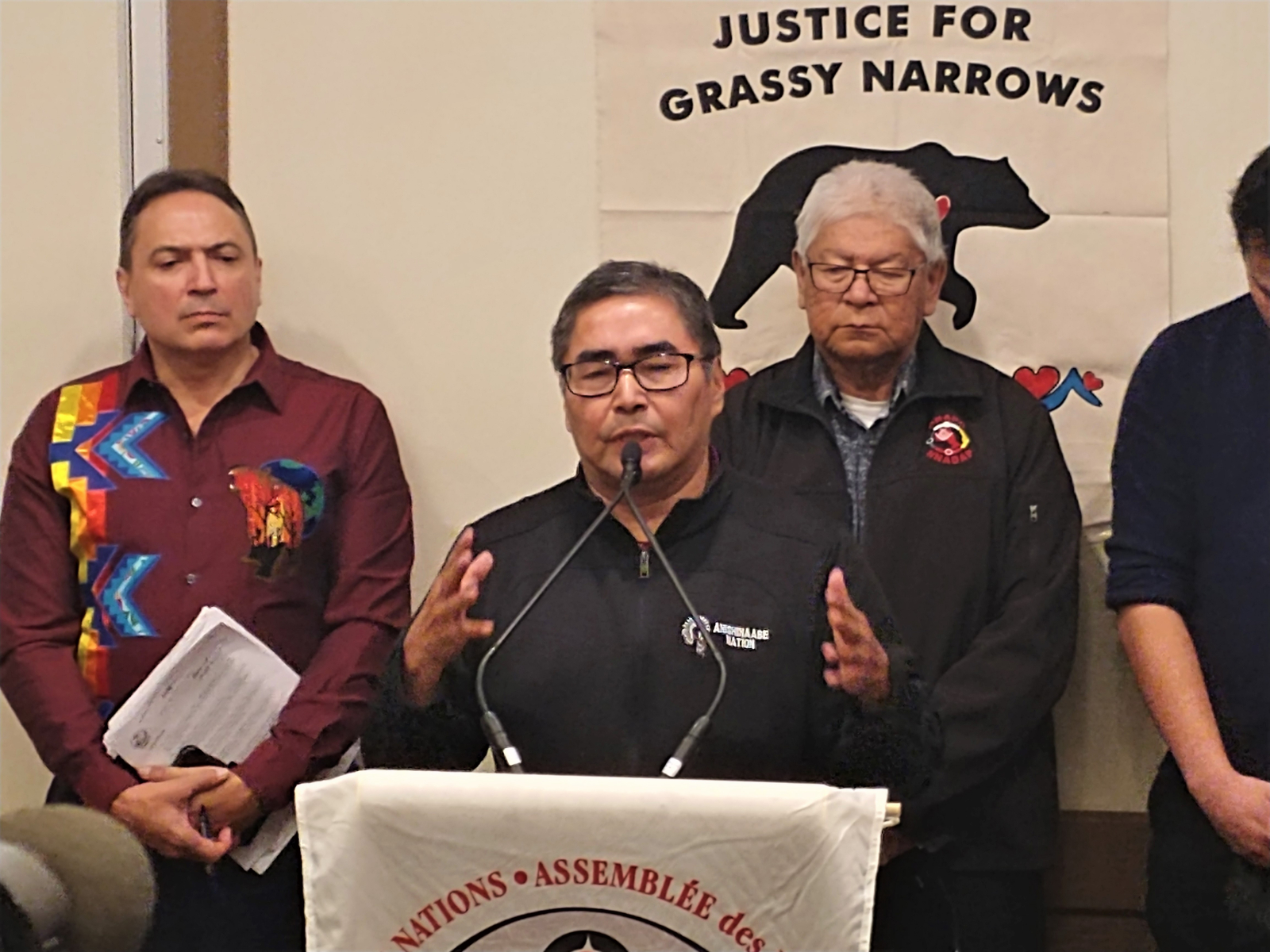 Grassy Narrows Chief Rudy Turtle speaks to media about the continued negotiations with the federal government over a mercury treatment facility for the community in Ottawa on Dec. 3, 2019. Photo by Carl Meyer
Previous story

“So far, this has been going nowhere — it’s been at a standstill,” Turtle said on the sidelines of a special chiefs assembly in Ottawa, where he was joined by several individuals including an elder from the northwestern Ontario community.

“We are calling upon Prime Minister (Justin) Trudeau to start acting and start doing something to quit these stalling tactics, and to get this thing moving.”

Turtle and others said many of Grassy Narrows’ first-generation victims of mercury poisoning are dying before they'll get chance to see a care facility up and running, and aren't able to live out their lives in their community, near their loved ones.

Fobister is related to Grassy Narrows' former chief, Simon Fobister, who backed the mercury care home but died this summer in Thunder Bay, Ont., away from his family.

Grassy Narrows has dealt with the effects of mercury contamination for decades, after a paper mill in nearby Dryden, Ont., dumped thousands of kilograms of mercury into the river system in the 1960s.

Former Liberal Jane Philpott committed to a specialized mercury treatment facility for Grassy Narrows in 2017, when she was Indigenous Services minister. Philpott was shuffled out of the role in 2019, then quit cabinet in protest over the SNC-Lavalin affair. After being kicked out of the Liberal caucus entirely, she failed to win her riding as an Independent in this fall’s federal election.

Two years after Philpott’s declaration, talks between the First Nation and the government remain ongoing. Under new Indigenous Services minister Seamus O’Regan, the two sides weren’t able to reach a consensus on the facility's design before the federal election was called.

On Nov. 20, Trudeau put a third person in charge of the department — Marc Miller.

Turtle said he had been dealing with O’Regan and Grassy Narrows had finished its “feasibility study” and drawn up a “blueprint” for the treatment facility. But he said the federal government “came back with their own design” that he said resembled more of an “assisted-living home.”

“That’s not what we were asking for,” Turtle said. “That’s where we’re stuck at. I don’t know what we have to say or what we have to do to tell them that this thing is about mercury.”

He also said Ottawa had told him the type of special treatment Grassy Narrows was asking for was not under federal jurisdiction, and so should be the province’s responsibility. But the bottom line is he's tired of waiting.

Appearing at the conference Tuesday, Miller gave a speech and answered questions from attendees. He told reporters he had “spent a couple of days in briefings specifically on this issue” of Grassy Narrows and the mercury care home.

“I haven’t met the chief yet. I will be meeting him tomorrow, and we will be having a discussion on that issue. The government of Canada stands ready to help, and we will,” Miller said.

“Again, before we make any public statements to that effect, I need to meet with the chief — we need to go over the details of what he wants done. But we will get it done.”

Asked to respond to Turtle’s comments about the government using “stalling tactics,” Miller said, “I have a tremendous amount of respect for Chief Turtle,” and acknowledged there was “work to be done.”

“Out of respect for him, I won’t comment on what he said until I have a chance to sit down and hear it directly from him,” he added.

In his address to the assembly, Miller tried to emphasize that he understands the enormity of the job ahead of him.

“I won’t gloss over things. We do have decades and decades of wrongs to right,” he said.

“What we see unfurling in front of us in courtrooms across Canada is the cost of inaction. There’s a price to action — it’s a steep one — but an even greater cost to inaction.”

"When you have mercury

"When you have mercury poisoning, you have it for life"

This is, unfortunately the perfect example of corporate malfeasance and government ineptitude. The lethal effects of mercury poisoning have been known for hundreds of years. The company MUST have known what thery did was - if not technically illegal, was worse, it was ethically, morally depraved. They got away with it because the mill was remote. They justified it to themselves because the only people likely to be affected were unimportant, indeed, reviled, indigenous. Both these factors have continued to affect the way Grassy Narrows has been dealt with. Had it happened in Toronto or Shawinigan holy hell would have erupted.

Despite all the righteous outrage over the past 50 years, nothing substantive has been done. Fact: "spilled" mercury is almost impossible to clean up. I'm not aware of any effective technology. The only solution I've heard is time, allow the river to bury the contamination, above all don't disturb the sediments that are capturing/burying the poison. This process requires geological time scales.

Fact: as noted in the first sentence, mercury poisoning is not susceptible to "cure". One can only accept its presence and do one's best to mitigate the effects. To avoid the source of the contamination - which the people of Grassy Narrows, cannot, or will not do. No indigenous peoples willingly abandon ancestral lands - the only spot on the planet where they feel they belong, which they have a right to defend.

Evidently, successive govenments have failed to provide alternative, viable, acceptable lands to the people of Grassy Narrows. Meeting the needs of an uprooted indigenous peoples is a tricky thing - like trying to transplant a hundred year old tree. It is probably harder to successfully transplant an indigenous community, especially in territory that is not particularly hospitable to humans, and is largely devoid of sustanance.

This is a crisis, a tragedy, wholly the consequences of colonialist greed and malevolence. Whatever bandaids Canada's governments have to apply, we are obligated to redress, as genuinely as possible, this example of the manifold wrongs we have inflicted on Canada's First Nations. AND, it has to be done NOW, within the mandate of this current government, AND it has to be done right.

The token redress of a treatment facility is not rocket science. Its design, contruction and provision for maintenance is well within the capacity of Canadians. We have the medical, scientific knowledge. We can adapt these to the wisdom and needs of the community - which deserves the ultimate voice. In the scale of things, it is a small price to pay for the harm done.

The complete history of this crime, its consequences and the pitiful remediation must be documented as a powerful and cautionary lesson for those who still feel entitled to endanger indigenous, indeed, all life on the planet, with their greedy, reckless, despoliation of the earth which is heedless of the irreparable harms done, as long as there is profit to be gained.

Treasures of wickedness profit nothing (Prov. 10.2)