By Lee Berthiaume in News, US News, Politics | December 4th 2019 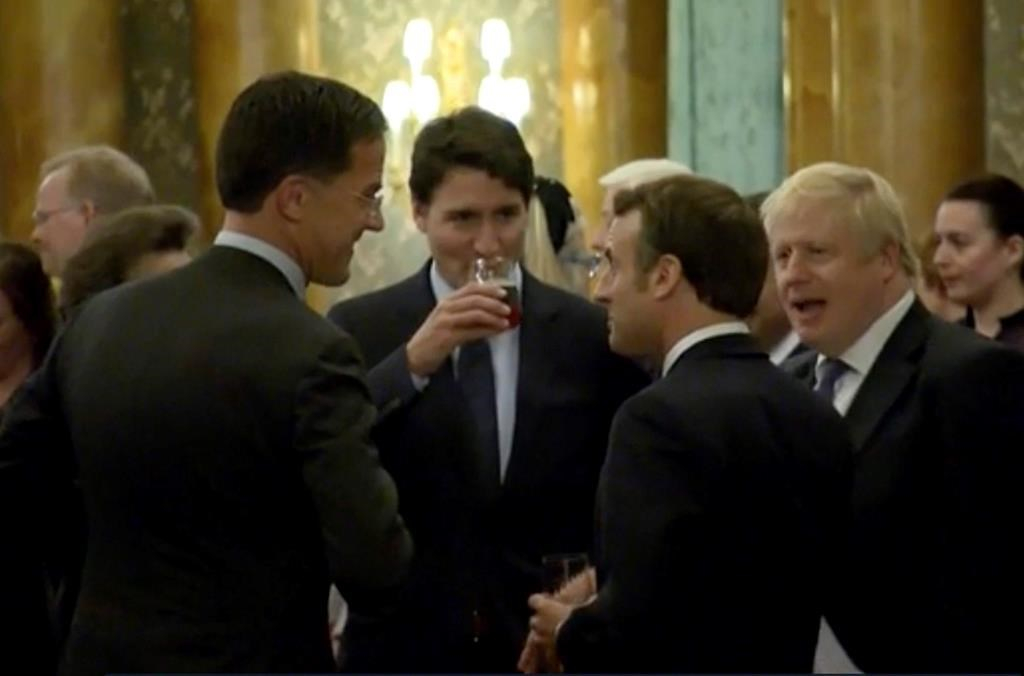 Prime Minister Justin Trudeau escaped an international summit with his relationship with U.S. President Donald Trump apparently intact in the wake of ill-timed comments that threatened to ignite tensions between the two leaders.

The damage came in the form of candid comments Trudeau made about the mercurial president that were captured on video and quickly broadcast around the world.

Trump subsequently called Trudeau "two-faced," but otherwise appeared to take the comments in stride, no doubt leaving Trudeau — and the rest of Canada — to breathe a sigh of relief the damage was not worse.

"We have a very good and constructive relationship between me and the president that has allowed us to move forward on protecting our workers through the renewed NAFTA deal, through the steel tariffs, which we got lifted, through many initiatives," Trudeau said.

"We will continue to have an excellent relationship."

Trudeau arrived in the United Kingdom on Monday hoping to bridge a growing gap between some members of the NATO military alliance — particularly the U.S., France and Turkey — as the organization celebrated its 70th anniversary.

Those three countries have been at odds on a number of fronts, with French President Emmanuel Macron voicing frustration over a lack of co-ordination and communication within the alliance, as exemplified by American and Turkish actions in Syria.

Instead, Trudeau faced repeated questions about Canada's failure to spend two per cent of its gross domestic product — a common measurement of a nation's economic wealth — on its military.

That included an exchange with Trump during an impromptu 40-minute news conference Tuesday in which the Canadian prime minister tried to deflect the U.S. president's attention away from the fact Canada has no plan to reach the two-per-cent target.

"He was late because he takes a 40-minute press conference off the top," Trudeau said at one point. Trudeau was also heard saying Trump's "team's jaws drop to the floor" when the latter announced the next G7 summit would be held at Camp David.

Trump cancelled his original plan to hold the summit at one of his resorts following a bipartisan political backlash in October and floated Camp David as a replacement venue.

The footage, shot by the British host's pool camera, quickly spread across the internet and broadcast by international media such as Fox News and the New York Times, with observers suggesting Trudeau and the other leaders were mocking Trump, who has previously lashed out at perceived slights.

Trump broke his silence during a news conference with German Chancellor Angela Merkel on Wednesday afternoon, calling Trudeau "two-faced," before adding: "But honestly, with Trudeau, he's a nice guy. I've found him to be a very nice guy."

The U.S. president went on to suggest Trudeau was simply upset Canada had been called out for not spending enough on its military.

Later, during a working lunch with leaders of countries meeting the two-per-cent spending target, a White House pool reporter noted Trump told one attendee it "was funny when I said that guy was two-faced," referring to Trudeau.

Trudeau played down the incident.

"Last night, I made a reference to the fact that there was an unscheduled press conference before my meeting with president Trump and I was happy to take part in it, but it was certainly notable," the prime minister said during a news conference at the end of the summit.

"And I've had a number of good conversations with the president over the course of this day and yesterday."

Trudeau also announced Canada would make a full fighter-jet squadron and several naval warships available for a NATO deployment on 30 days notice as the alliance seeks to boost its ability to respond rapidly to emergencies.

Trump cancelled his own scheduled news conference following Wednesday's NATO meeting, which was held at an exclusive golf club northwest of London.

Trudeau was scheduled to return to Canada on Wednesday night in time for the opening of the new Parliament on Thursday.

NATO Secretary-General Jens Stoltenberg made no reference to Trudeau's exchange as he formally ended the summit, in which members reiterated the alliance's founding principle that an attack on one represents an attack on all and recommitted to spending more on defence.

Leaders also agreed to a renewed plan for defending Poland and the Baltics, where Canada has deployed 600 troops to Latvia as a check against Russian aggression. There had been fears Turkey would hold up the plan unless members agreed to label a Kurdish group as terrorists.

There was also a commitment to ensuring the security of members' telecommunications infrastructure, including 5G networks. It was unclear, however, whether that would involve countries like Canada banning Chinese firm Huawei from such work, as the U.S. has demanded.

"The decisions that we will be making around 5G and telecommunications in Canada will be based on the advice of our experts and working in collaboration with our allies," Trudeau said.

"This is an issue that countries around the world are struggling with and we are going to continue to work in a responsible way to ensure the security of Canadians and our telecommunications systems."

This report by The Canadian Press was first published Dec. 4, 2019.

Let's report the other half

Let's report the other half of the story about the conversation re-Trudeau. What this covertly obtained, edited, salacious and shoddy story omits is the reason for the laughter. Trump had made a surprise announcement that the G7 would be held at Camp David next year. This blindsided his entourage. "Jaws dropped". There, now you know!
Please don't be like MSM and use biased reporting practices. A little research which could be done by a 6th-grade student would have avoided this entire debacle. Shame on everyone who fails to adhere to ethical journalistic standards.

Other news sources showed a

Other news sources showed a video of giggles without mentioning what was said. This article had the most details. But I can't see how others would giggle at Trudeau's comments.

This story is a non news

This story is a non news maker, basically the Prime Minister was telling the truth about the days events, Trump taking 40 minutes off the top ( probably for his ego), then a surprise announcement about the G7 that his team had no idea was coming, Im sure that the other team members of the attending countries noticed jaws dropping on the U.S. side.
No damage to see here.

This eternal grumbling from

This eternal grumbling from NATO and the U.S. never mentions the exploitative history of the colonial powers on Canada's economy, nor do they mention the disproportionate Canadian loss of life in two world wars fought over European hegemonic schemes. Without the help of its despised former colonial forces Britain and France may well have lost to Germany on both occasions. The futile arrogance of these war mongering societies needs some careful parsing by Canadians before we yield more of our lives and substance to their inability to co-exist.

Canada is not a nuclear armed Nation. nor is there much ambition to become one. But, like Australia, Like great swaths of North Africa, the Middle East and the African continent we have, or should have, a deep and abiding mistrust of European "white superiority" machinations. Here is a once continuously war plagued part of the world which managed at unbelievable cost to survive their own stupidity, greed and classism, through two catastrophic 20th C. wars fought largely by the underprivileged classes of all the nations involved. Now, that entitlement, that white privilege, has once again reared its loathsmome head fueling the neo- fascism that is trying to dismantle the most peaceful and prosperous, decades their citizens have ever known. And it is precisely this ugly discrimination against the former colonial slaves who funded their endless internecine battles that is driving this self destructive implosion of the only institution that has made them healthy, wealthy, but not wise.

What goes around comes around is a rather gnomic phrase - easily interpreted in a variety of ways. But all of those interpretations descend form the ancient "what you sow, you shall reap". No one should really be surprised that the endlessly despised, the people of colour who populate most of the world except Northern Europe, are almost unconsciously having their revenge on the societies that ripped them off for centuries. The people of colour are an unstoppable force. All the world's forced migrations initiated by unbearable pressures, starvation, devastation of arable lands, hegemoniic theocratic despotism, hegemonic kleptocratic war lords, genocide, are the inevitable response to arrogant, aggressive, murderous cabals of so-called leaders who are in reality, as they always have been, merely greedy louts and bullies, with universally criminal instincts. For a long time the Colonial Powers dominated this segment of humanity. As is usual, their brutally subjugated vassals eventually learned from their masters the techniques of vengeance.

Europe is finally reaping, in zombie like form the wretched of the earth that they largely precipitated. Migration to the lands of milk and honey are vengeance served cold.

Trump weighs in on Trudeau's past

Trump’s racist tweets: ‘Not how we do things in Canada’