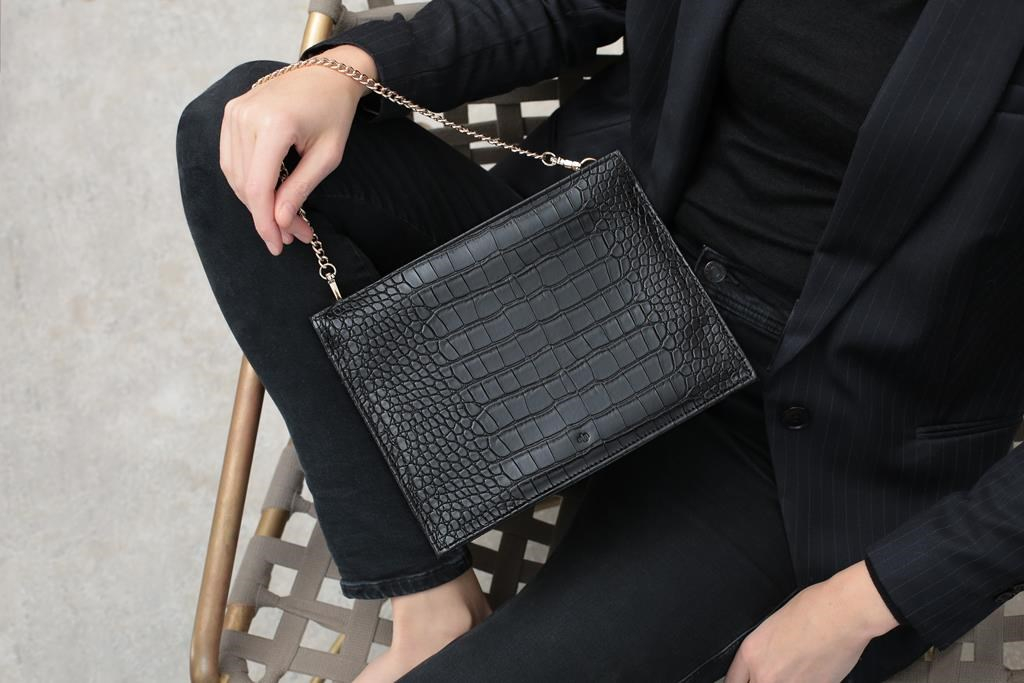 But this season, the Toronto-based entrepreneur did something few fashion labels associated with luxury do — she embraced the fake stuff.

Aldorsson describes her fall collection as entirely animal-free, a 180-degree turn from the Italy-imported skins that defined her refined line of clutches and cross-body bags for nine years.

"There's so much deforestation for farming and a lot of things that were kind of starting to bother me, especially (after) having small kids," says Aldorsson, who founded her eponymous brand, Ela, with husband Martin Aldorsson.

"As a small brand it just felt really wasteful."

Dubbed a "vegan leather collection," Aldorsson's new line is made from solvent-based polyurethane and manufactured in China.

She admits that falls short for many eco-conscious shoppers concerned about the ecological impact of production and toxic waste, not to mention the afterlife of petroleum-based products that do not break down.

Nevertheless, she considers it a step in the right direction for her company, favoured by trendsetters including Gwyneth Paltrow, Lupita Nyong'o and the former Meghan Markle.

In the meantime, Aldorsson is looking into a water-based polyurethane for her fall 2020 collection, noting that although new alternatives are emerging, it takes time to work them into new products.

She's excited by recent innovations that are ushering alternatives to the plastic-looking, rubber-tire pleather varieties of yore.

They include leather-like fabrics made from the discarded fibres and skin of wine grapes and juiced apples. Other experiments have turned out options derived from pineapple leaves, banana tree waste, kombucha scoby and the thread-like cells of mushrooms.

She takes issue with anyone who tries to rebrand these materials as "vegan leather," arguing they are neither vegan, nor leather.

"At the end of the day it's plastic. It doesn't biodegrade, it's here forever and it doesn't have the durability that leather has," says Kozlowski, an assistant professor in fashion design, ethics and sustainability at Ryerson University.

"Mass farming of animals is also problematic but at least it's biodegradable, and you have the durability and the longevity that comes with leather."

PVC and PU materials are sometimes mixed with other materials like silicone, and/or coated to mimic a desired sheen or shine, making them impossible to recycle because mixed materials can't be separated, she adds.

Kozlowski also questions how far modern solvent-based varieties have come, suggesting synthetic leather is still not very breathable, even new versions like those used by designer Stella McCartney, which bills itself as a vegetarian brand and recently announced a new Stan Smith sneaker for Adidas.

She cautions consumers that the term "vegan leather" can be applied to anything that is animal-free — whether it's derived from food waste or petrochemicals.

"Vegan leather is just a terrible term to be using in the first place because it's not a leather. It's not a leather, it's very confusing for the consumer. Sustainability is already an extremely complex topic because there is no such thing as a sustainable product that exists right now."

Executives at the Montreal-based shoe brand Call It Spring acknowledge those limitations but say they launched a first-ever "sustainable vegan" shoe and handbag collection to help consumers — and push the broader industry that supports manufacturing — to do more for the environment.

Alyssa Whited, the brand's global director of marketing, says about 10 per cent of its products use a water-based PU, and that the company hopes to extend that to about 35 per cent of the collection in fall 2020.

"We're on a journey because this isn't going to happen for us overnight," says Whited, adding that the eco-mandate extends to earning "climate neutral" certification for their stores, which ditched disposable shopping bags across North America and adopted boxes that are deforestation-free and use vegetable ink.

Whited says the brand eliminated animal products and components with a "fully vegan" collection this past spring. Before that, its products were about 90 per cent animal-free.

Getting to 100 per cent animal-free took six months to a year to come up with the right formula, says vice-president of product and brand Monia Atijas. Non-vegan components included toxic glue and scraps of leather hidden inside the shoe.

"That 10 per cent was the the most difficult because it involved a lot of different suppliers and it affected the supply chain," Atijas says from Montreal.

One of the current challenges is figuring out how to get water-based PU to look like solvent-based PU, she adds.

"That's a million-dollar question. We just came back from China and we're trying to make it look as close as possible to the solvent-based (version) with the nice finish and the embossing, et cetera. It's a process."

From a clothing perspective, Toronto-based womenswear designer Hilary MacMillan says the faux stuff can actually be easier to work with than real leather, which is more expensive and offers material only as large as the animal it came from.

"When you're using leather you kind of have to look for any imperfections on the skin and play a little bit more Tetris," says MacMillan, adding that forces more seams in the resulting garment, and therefore means more sewing and more work.

MacMillan says she began shifting to cruelty-free textiles in 2016 in response to growing consumer demand. Although she considered mushroom leather and Pinatex, derived from pineapple leaves, she deemed them "not quite there for apparel."

"We're trying to use more blended stuff, so cotton-mix PVC just to lower the impact a little bit," says MacMillan, whose spring/summer 2019 collection phased out silks and wools to become "cruelty-free."

"It's a status thing right? To carry a leather designer handbag or a handmade leather bag that was made in Italy, brand name or not, is something that signals a refinement in your taste. And some people are very conscious of that," says Kim.

However, the lower price of a well-made faux leather bag has encouraged some of her clients to consider alternatives, she adds, pointing to several brands pushing the style envelope including Canada's Ela handbags and AI Toronto Seoul and the Budapest-based Nanushka.

Kozlowski says eco-conscious shoppers would serve the planet better by only buying things they really like and keeping them for a long time.

"It doesn't matter what your product is made out of. It's how long do you intend to keep it?"

By Elizabeth McSheffrey | News | March 17th 2016
State Of The Animal