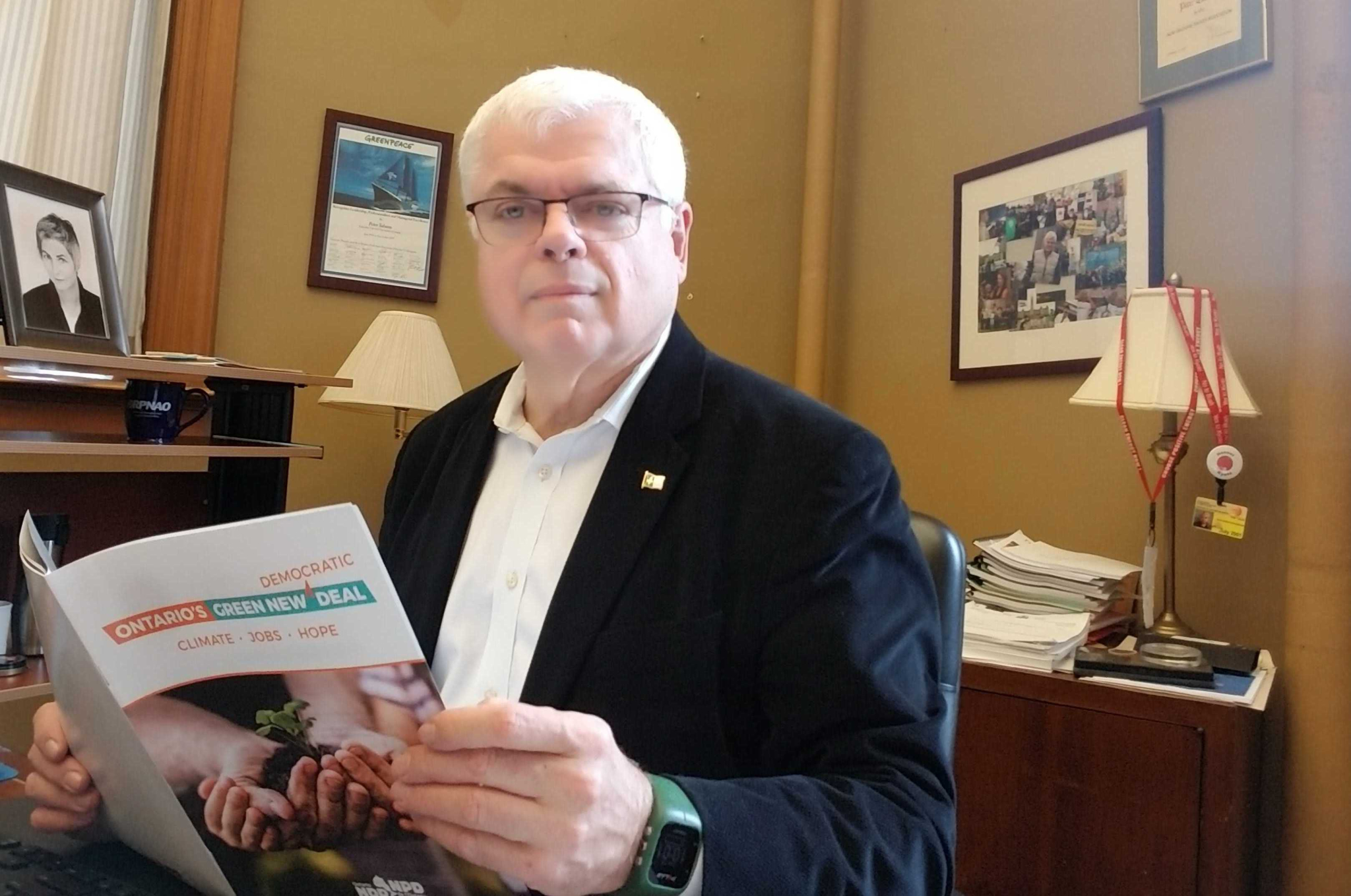 Ontario’s sprawling public sector should be required to steadily curtail its greenhouse gas emissions until they reach net zero, the Opposition New Democrats say in draft legislation seen by National Observer on Tuesday.

The private member's bill calls for the province’s electricity system, hospitals, schools and universities, municipalities, public housing and government vehicle fleets to be directed to cut emissions by at least five per cent a year under the terms of the proposed Ontario Climate Crisis Strategy for the Public Sector Act, 2019. It would likely take two decades to achieve net zero under the plan.

The call for action comes a week after a scathing critique of the Doug Ford government’s climate and environment policies from the province’s auditor general, who said the Progressive Conservatives' plans were riddled with errors and omissions and insufficient to meet Ontario’s 2030 emissions-reduction targets.

“It's pretty clear that the crisis is deepening; more extreme weather, more drought, more floods. And we need to be accelerating the response to that,” Peter Tabuns, the NDP’s critic for energy and the climate crisis, said in an interview at his Queen’s Park office on Tuesday.

“The Ford government is in political trouble on the climate front,” he added. “This is a very practical way of addressing climate issues.”

Ford’s government has been criticized for pulling Ontario out of the cap-and-trade scheme it shared with Quebec and California. It also cancelled most of the green policies funded by the nearly $2 billion a year it was raising from polluters who had to pay if they exceeded shrinking emission limits.

“Typically, in Europe and the United States, when you have net-zero, you've got solar panels producing electricity that balances out the other energy use in that building,” Tabuns said.

It would also create a procurement framework that evaluates the greenhouse gas emissions of any given proposal and ignore bids exceeding the carbon footprint of rival bids by more than 10 per cent.

Ontario’s sprawling public sector should be directed to steadily curtail its greenhouse gas emissions until they reach net zero, the @OntarioNDP say, as their climate crisis critic @Peter_Tabuns prepares a bill that would make it so.

The proposal does not estimate cost to implement — a calculation which would come later in the process — but Tabuns said, “We all know that the cost of inaction is astronomical.”

He said the bill complements the NDP’s Green New Democratic Deal, a framework plan the provincial party launched in June and plans to flesh out further between now and the next provincial election, due by June 2022.

Jeff Yurek, Ontario’s environment minister, responded to last week’s report from the auditor general by acknowledging that the government’s environment plan needed to be improved and welcoming suggestions from others on how to do so.

His office said on Wednesday in response to the bill that it “was doing its part to fight climate change” and that it would “continue to encourage local leadership” from the public sector, municipalities and others, without mentioning any specific direction it was giving to these groups.

“There is an entire chapter in the environment plan dedicated to government leadership in fighting climate change,” said his spokesman Andrew Buttigieg.

That chapter mostly argues that Ontario has done it part already in terms of emission reductions (largely thanks to the coal power phase-out completed by former Liberal governments) and talks about mitigation efforts to deal with its most acute effects.

It does not reference hard targets for most of its plans, which largely remain in consultative stages.

He also said the government would “reduce its per employee real estate footprint to reduce energy costs and emissions” and “provide guidance” to public property owners of heritage buildings to help them reduce their energy use.

Any member of the provincial legislature can put forward a private member’s bill, but for this one to move forward would require the support of at least some members of the Progressive Conservative majority in the legislature.

“If they are actually interested in new ideas, they should adopt this one,” Tabuns said.

He said the NDP had taken inspiration from the way previous Liberal governments were able to cut coal from a quarter of the province’s energy mix to zero because they owned the plants.

“Here, the broader public sector owns buildings, it owns fleets of vehicles, it purchases services, it runs the electricity system,” he said. “We can actually decide the direction we're going in and make it happen.”

Gideon Forman, a climate change and transportation policy analyst at the David Suzuki Foundation, agreed that the plan benefits from being directed at entities the government directly controls or heavily influences.

“The provincial government can move quickly to make very significant reductions from the public sector,” he said, “I think the overall strategy is a very smart one.

“If the Ontario public sector in a really serious way committed to some of the things contained in this bill, it would send a very significant signal to the market.”

Ontario’s public sector emits some 6.5 megatonnes (Mt) of pollution a year, according to a 2018 report from the province’s environmental commissioner, Dianne Saxe, whose job Ford axed earlier this year.

That report said green procurement policies adopted in seven European countries had helped reduce costs by one per cent and cut emissions by a quarter.

Tabuns said several years ago it was estimated that Ontario’s schools were spending $350 million a year on energy.

“That's a lot of money,” he said. “We're spending huge amounts on energy. And we can save huge amounts by reducing our use of fossil fuels.”

The province is meanwhile on track to overshoot its 2030 emissions-reduction target by some 20 Mt, according to the auditor general, who incorporated some of the commissioner’s work.

The bill directly challenges the government’s plan to significantly expand the use of natural gas for electricity generation, which Tabuns said would triple natural gas emissions by 2035.

“You can't do that,” he said. “You can't increase your emissions in the public sector and be compliant with this bill.”

He said the shift envisioned in the plan would likely happen largely in the background for residents.

“You'll get on a bus that's an electric bus, you'll get on a GO train that’s electrified, you’ll walk into buildings that are not using natural gas for heating, and that have dramatically lower demand for cooling,” he said. “What you'll notice, I think, is a lot of economic activity, because if you're going to make a transformation like this, there’s going to big investments and large-scale job creation.”

“So you'll see a lot of construction, frankly. And my hope is you'll see cleaner air.”

The NDP proposal would produce “immediate health benefits” according to the Canadian Association of Physicians for the Environment (CAPE), which sees climate change as the top long-term health issue facing the country.

“The beauty of this is that you are going to fight climate change, and at the same time produce immediate health benefits for communities across Ontario,” said Kim Perrotta, CAPE’s senior director for climate, health and policy.

She said that while the prior Liberal government’s removal of coal-fired power plants from Ontario’s energy mix had sharply reduced air pollution in the province, much more could be done by targeting public buildings, including hospitals, where the lights are on and the heat is burning all day, every day.

“This kind of approach makes good economic sense and it makes good health sense, and it would be fighting climate change at the same time,” Perrotta said.

Canada’s health-care facilities emit the third-most greenhouse gas emissions per capita in the world, accounting for four per cent of the country’s overall pollution, the Lancet medical journal said in a November report looking at the links between climate change and health.

Buildings that use natural gas for heating release nitrogen oxides, which Perrotta said create direct adverse effects and also turn into atmospheric fine particulate matter linked to lung cancer and heart disease. More recent research on the health effects of air pollution has also connected it to developmental delays and Alzheimer's, she said.

(Editor’s note: This article was updated at 7:13 p.m. on Dec. 10, 2019, to include comments from an analyst at the David Suzuki Foundation and additional comments from Peter Tabuns, and at 8:23 p.m. on Dec. 11, 2019 to note tabling a bill and include a response from the office of Environment Minister Jeff Yurek)

excellent practical win win win proposals for cutting emissions with science based regulation -- This is what quiet good governance would look like and what the public thinks "efficiency" means.