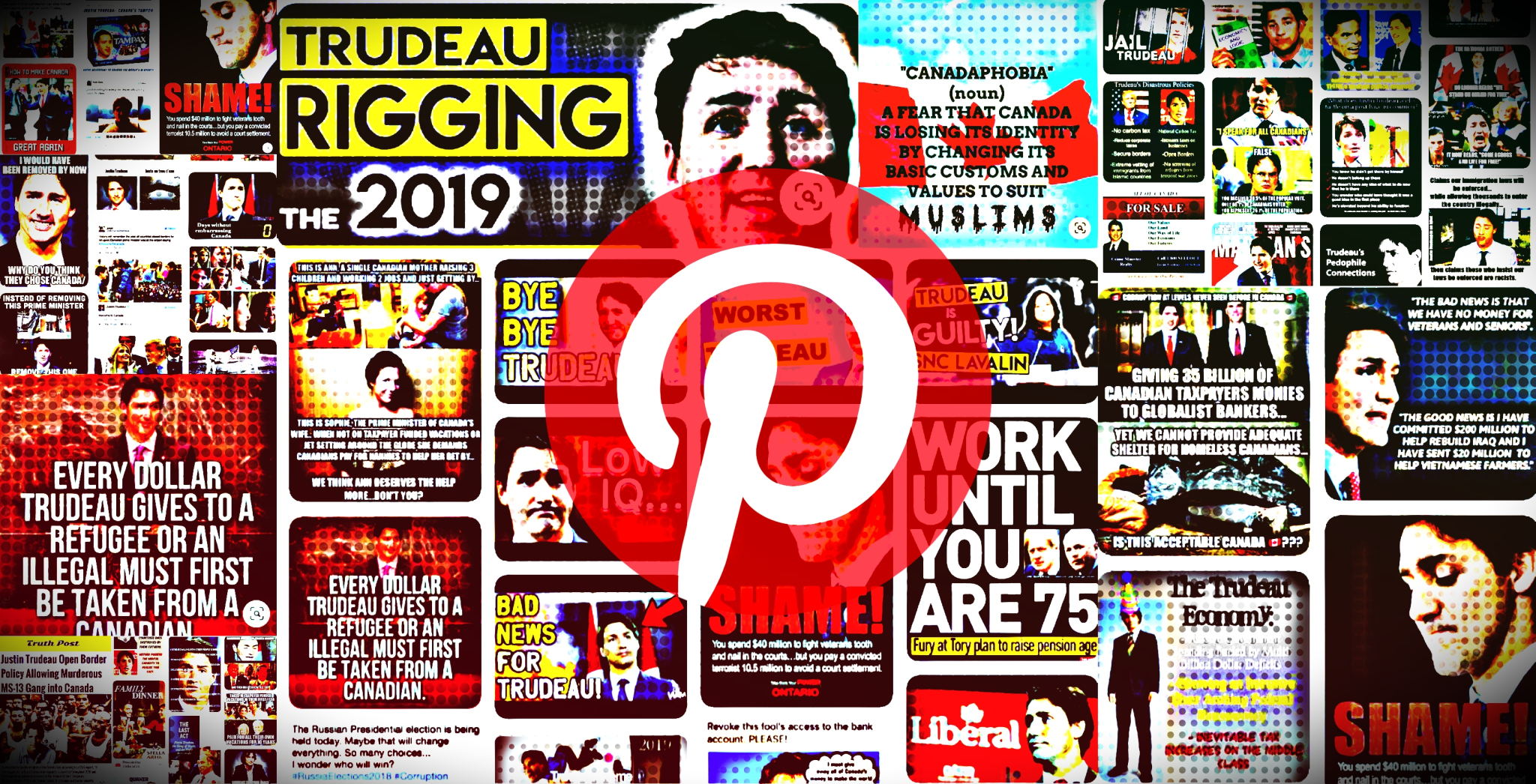 With all eyes on tech giants like Facebook, Twitter and Google, the Liberal government appears to have overlooked another key contributor to the spread of disinformation as it prepared for the 2019 election.

The Canadian government thought Pinterest wouldn’t be vulnerable to political disinformation, in part because government officials believed the image-sharing platform doesn’t use an algorithm to promote content, according to a briefing obtained by National Observer.

But as National Observer recently reported, Pinterest does use an algorithm, by means of which, Pinterest users were steered toward misleading content, extremist memes and conspiracy theories about Canadian politics ahead of the Oct. 21 federal election, researchers studying the platform found.

“Ultimately, the best disinformation campaigns are the ones people don’t know about,” said John Gray, a visiting research fellow at the Atlantic Council’s Digital Forensics Research Lab (DFRLab), who conducted the analysis of Pinterest alongside research associate Kanishk Karan.

Canadian government officials held a “discussion” with Pinterest staff on March 29, according to a briefing note prepared in May for former democratic institutions minister Karina Gould and obtained by National Observer through freedom-of-information. (Gould is now the minister of international development.)

Though the memo notes that Pinterest has struggled with “health-related disinformation,” it also concluded that the platform’s business model makes it not “particularly useful for co-ordinated disinformation campaigns” and it does not have issues with false information going viral.

But researchers say this simply isn’t the case.

“Pinterest is an avenue for visual disinformation,” Karan told National Observer. “It’s just too bold to suggest that the platform doesn’t have a problem with disinformation.”

Exclusive: An internal memo obtained by National Observer shows that government officials downplayed Pinterest's disinformation problem ahead of the federal election, potentially creating an opening for bad actors to exploit.

Liberal cabinet minister Dominic LeBlanc — whose role as president of the privy council now encompasses Gould’s former Democratic Institutions role — didn’t answer questions about whether the government plans to include Pinterest in future work on the file, and redirected to the Privy Council Office.

The PCO didn’t answer questions about the extent to which bureaucrats who spoke with Pinterest were familiar with the platform. In a statement, it said that the note summarized what government officials heard from Pinterest, and that Gould later wrote to Pinterest in June 2019 — along with Twitter, Facebook, Microsoft, Google, Snapchat and Reddit — to ask the company to update the public on its election integrity efforts.

“The government will continue to explore all reasonable options for ensuring that social media platforms contribute to building ⁠— not hindering ⁠— a healthy Canadian democracy,” the statement said.

The briefing note made similar conclusions about the social media platform Reddit, National Observer previously reported in October. The memo showed that the government thought that disinformation and hate speech are not major problems on Reddit, In fact, hate speech has thrived on the platform for years, and Reddit played an outsized role in the spread of misinformation during the election.

The precise degree to which Pinterest or Reddit enabled the spread of hyperpartisan memes and disinformation during Canada’s election campaign isn’t clear, as influence is difficult to measure. The federal government has said there was no election interference that met its threshold for notifying the public.

As an image-based platform, Pinterest functions differently than text-based platforms like Facebook and Twitter. However, this doesn’t mean it’s not vulnerable to manipulation — it just means it may play a different role in the cycle of disinformation.

Most information operations involve multiple platforms, Gray said, and the interconnected nature of social networking sites is a key feature that can’t be ignored.

“If we look at this strictly on a platform-by-platform basis, we’re failing to see the entire ecosystem,” said Gray. “We’ve got to talk about the relationships between platforms [and] how things are moving between them.”

Karan said any discussion of disinformation needs to look at all platforms as part of the same ecosystem, rather than relegating certain platforms to lower-priority or lower-risk discussions.

“Disinformation is not platform-specific,” Karan said. “Our conversations shouldn’t be, either.”

As memes spread between users and across platforms, they become independent of their creators. Unless they’re branded with a logo or other identifying signature, it can be difficult to trace the meme back to its original source, which could make visual platforms like Pinterest particularly appealing for bad actors looking to cover their tracks.

However, the April 2019 memo appears to downplay the role of Pinterest as a vehicle for sharing content, claiming that the platform is “not designed to allow large-scale re-sharing.”

This stands in stark contrast to the description offered by Gray, who said Pinterest actually “makes it relatively easy to share content — not just to re-pin it [on the platform], but to share it to [other platforms] as well.”

Many accounts on Pinterest are anonymous, which makes the platform more vulnerable to disinformation campaigns, Gray said. A single person can operate numerous anonymous accounts, which can then be used to manipulate algorithms or create the illusion of popularity, so that an idea or position without much public support appears more mainstream than it actually is.

Pinterest has played a key role in other disinformation operations, including Russia’s 2016 influence campaign targeting the U.S. election.

The memo notes that Pinterest said it would “actively block searches and links to political or divisive issues ahead of the Canadian vote.” However, the DFRLab analysis shows that searches for “Trudeau” were not blocked in the days leading up to the election, nor were conspiratorial content or extremist memes featuring Islamophobic and anti-immigrant sentiment.

According to the web analytics company Stat Counter, Pinterest is the second-most popular social media platform in Canada, accounting for 22 per cent of all traffic from Canadian social media users. Research on Pinterest users in the U.S. shows that the platform is among the most conservative of all social networking sites, and also one of the least demographically diverse — a finding that generally holds true among Canadian users, as well.

According to Gray, as long as political disinformation and inflammatory memes have a home on platforms like Pinterest, the site will remain vulnerable to being used as part of domestic and foreign disinformation operations. The very presence of such content in such large quantities on a major social media platform is likely to catch the attention of bad actors, he said.

“I see these meme boards as a weapons cache — if you leave it around, people are going to use it,” he warned.