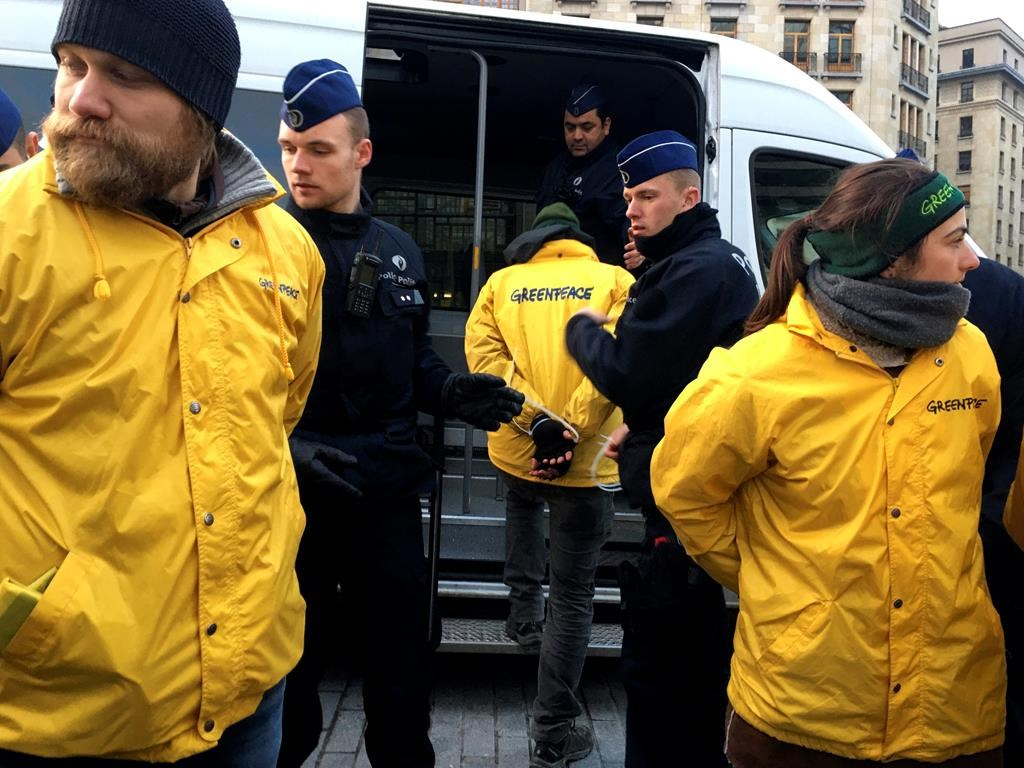 Climate activists are detained by police after demonstrators unfurled a climate banner on the exterior of the Europa building outside of an EU summit meeting in Brussels, on Thursday, Dec. 12, 2019. Photo by The Associated Press/Sylvain Plazy
Previous story
Next story

Greenpeace activists scaled the European Union’s new headquarters in Brussels on Thursday and unfurled a huge banner warning of a “climate emergency,” hours before the bloc’s leaders gather for a summit focused on plans to combat global warming.

The banner stood for several hours but was removed before EU leaders gathered for a two-day summit. The activists were also dispersed.

Around 30 of them, clad in red and wearing climbing gear had stood on ledges of the Europa building as police gathered below and a helicopter circled overhead. Some fired red flares into the air as curious commuters watched on.

A reporter from The Associated Press said around 20 activists on the ground were detained. The group managed to climb the building by using the ladder of an old fire truck and had enough food to last for two days, according to Greenpeace spokesman Mark Breddy.

The EU leaders are set to debate ways for the 28-nation bloc to become carbon neutral by 2050. But poorer coal-dependent nations fear they could be hardest hit by the effort to transform their energy sources.

A large majority of member states have committed to the goal but Poland, the Czech Republic and Hungary remain to be convinced.

“Everything has been done to get them on board, but there is no guarantee we will secure a deal," said a EU diplomat who was not authorized to speak publicly.

In an effort to get the support of all EU members, European Commission President Ursula von der Leyen unveiled on Wednesday a new “European Green Deal” with an offer of some 100 billion euros ($130 billion) to help fossil-fuel reliant EU nations that make the transition to lower emissions.

Speaking upon his arrival at the Europa building, Council president Charles Michel voiced his hopes that an agreement will be forthcoming.

“Climate neutrality is a very important goal," he said.

“The world is on fire and our governments are letting it burn," Greenpeace Europe Director Jorgo Riss told the AP at the scene.

He acknowledged that it's important to go carbon neutral, but said the leaders should not "leave it to future generations to take actions. They are in power today, they need to take action today.”

Ironically, the Europa building, known locally as The Egg and about 13 storeys high, was constructed in an eco-friendly way. The facade scaled by the activists is made of restored wooden window frames from renovation or demolition sites around Europe.Its roof is covered with solar panels and the building recycles rain water.

EU leaders will also discuss their long-term budget plans, economic developments. Britain's departure from the European Union will also be discussed in light of the country's election results, which will start to come through around midnight.