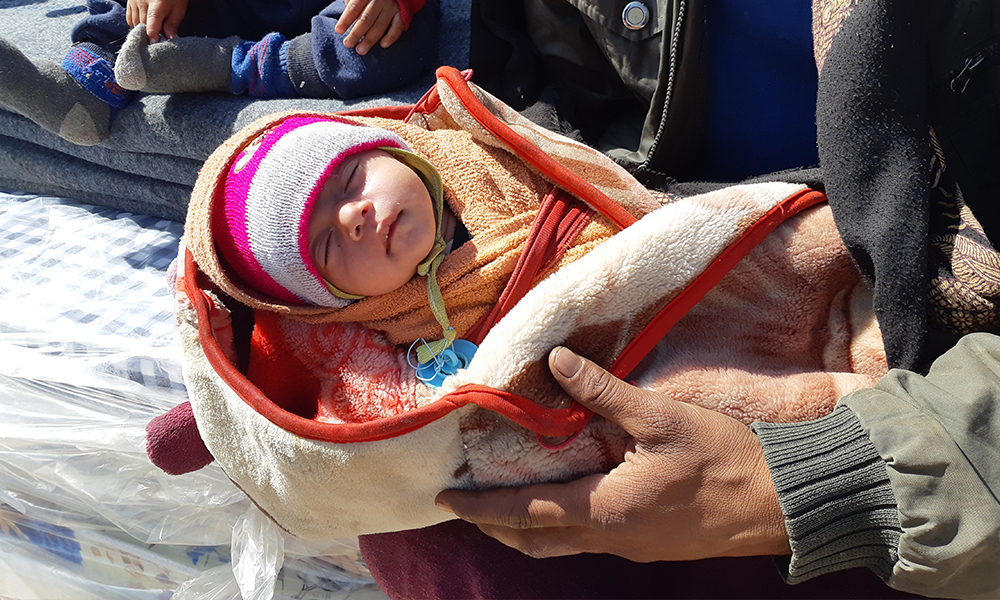 Mohammed is a 40-day-old newborn who fled with his family from Hajjah to Sa'ada in Yemen. The used to live in the open before UNHCR and partners helped them. ©UNHCR/Jamal Al-Bareay
Previous story
Next story

Jean-Nicolas Beuze is the Representative for UNHCR, the United Nations Refugee Agency, in Canada. In January 2020, he will be assuming his new post as UNHCR’s Representative in Yemen, home to “the world’s worst humanitarian crisis.” An estimated 24 million people - 80% of the population - are in acute need: 20 million people are food-insecure, 19.7 million are unable to get adequate healthcare and 17.8 million lack access to safe water. UNHCR is a vital lifeline for more than two million Yemenis internally displaced by years of conflict, and for another 250,000 people who have sought refuge in Yemen. We are helping them survive, recover and build a better future. Please donate now to help support refugees and internally displaced persons in Yemen.

Imagine a place where access to food and clean drinking water is a daily struggle for millions of children and their families.

Imagine a country where treatment is urgently needed for acute malnutrition – including more than three million children, pregnant women and new mothers.

Hamamah doesn’t need to imagine. It is the grim reality of conflict that has left devastation in its wake for Hamamah, her family and millions in Yemen.

After nearly three years as the Representative for UNHCR, the UN Refugee Agency, in Canada, I will soon join our team in Yemen. I was last there in 2013 during what became a very short-lived peace and reconciliation process. Since the renewed fighting in 2015, Yemen has spiraled into what the United Nations has described as “the world’s worst humanitarian crisis,” a country where an estimated 24 million people — 80 per cent of the population — are in urgent need of humanitarian assistance.

Hamamah is one of them.

Heavy fighting forced her to flee her home in Taiz in southwest Yemen more than two years ago. Now living in a tiny shack Aden, years of desperate hardship have followed.

“Every day is a fight for survival. We do not know how or if we will eat.”

​​​​​​​In 2017, she married Mohamad out of financial necessity. She sought to help ease the strain on her parents who were already struggling to provide food and care for Hamamah’s siblings displaced by the conflict.

After she became pregnant, Hamamah needed an emergency Caesarean section to give birth. Her baby girl was stillborn. She believes the infant died because of malnutrition and lack of medical care.

“When I got pregnant I couldn’t afford enough to eat,” says Hamamah.

“I remember feeling very weak throughout my pregnancy. We didn’t have enough to eat and I became increasingly weak; so I think my baby also became weak and she didn’t survive.”

Sadly, Hamamah is among nearly 3.5 million Yemenis who have been internally displaced from their homes by the fighting. What has surprised me — and perhaps saddened me — most, is that every month, more than 10,000 Ethiopians and Somalians, amongst others, make the perilous journey to Yemen seeking help and protection. What does it say about the state of our world when refugees and migrants see a country like Yemen — already impoverished and in the midst of a five-year conflict — as a solution to their own plight at home?

The task of providing aid to Hamamah and millions of children, women and men in need of life-saving assistance is immense – but essential. I am proud to be joining a dedicated team of more than 200 committed UNHCR staff on the ground in Yemen, working tirelessly to save and protect people.

UNHCR is working around the clock to provide water, food, shelter, medicine and protection for vulnerable, often traumatized people — like newborn Mohammed.

The 40-day-old baby arrived with his family in Sa'ada after they fled from Hajjah in northwestern Yemen nearly 300 kilometres away. The newborn and his family had previously lived out in the open before UNHCR and its partners offered assistance.

In 2019, UNHCR has worked with our partners to provide newly displaced families like Mohammed’s fleeing the frontlines with assistance installing emergency shelters and household essentials like blankets, buckets, kitchen sets, mattress and mats.

In the coming months, we will be doing outreach to some 4,000 families with cash assistance and essential aid items to help them through the winter months.

During my time in Canada, I met with people across the country and saw the incredible hospitality and selflessness of countless Canadians who have privately sponsored refugees and welcomed newcomers into their homes, businesses and places of worship. Having spent most of my career on the front lines of emergencies, I know the impact of the generosity of Canadians well.

Your financial support can make a substantial difference in improving the lives of children like Mohammed and millions displaced in Yemen. During this season of giving, your donation is a lifeline to Yemenis in need today and every day of the year.

This is a sponsored story provided by UNHCR.

Thank you for writing this

Thank you for writing this informative story. Wow. Thank you also for your work in Yemen. I will follow the situation there now with interest.

Thanks for this human angle.

Thanks for this human angle. For a little political context see the Toronto Star story of Mon., April 30, 2018,
By Brendan Kennedy, Investigative Reporter and Michelle Shephard, National Security Reporter. Not sure if this is still Canada's position, but I haven't seen anything to contradict it in the last couple of years.

"When Global Affairs Canada announced another aid package to war-torn Yemen in January, it boasted that Ottawa had given a total of $65 million to help ease what the United Nations has called “the worst man-made humanitarian crisis of our time.”

What Justin Trudeau’s government did not mention in its news release is that since 2015, Canada has also approved more than $284 million in exports of Canadian weapons and military goods to the countries bombing Yemen.

Project Ploughshares is a locally based (University of Waterloo) peace research and advocacy organization of long and distinguished standing with roots in Mennonite Christianity. I wish more media, including our own beloved National Observer, would pay this good organization more attention.