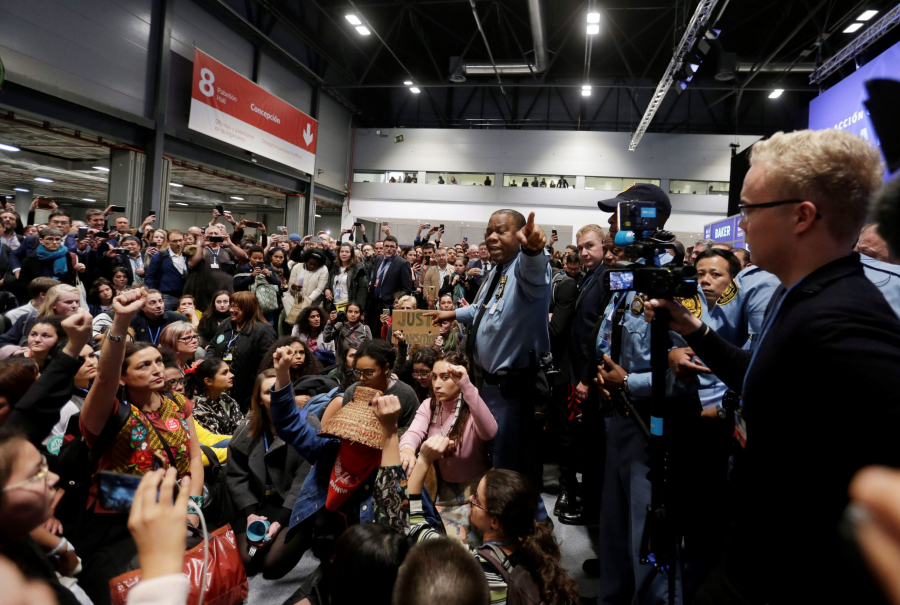 The United Nations climate talks went into record overtime and then ended in failure on Sunday. The countries gathered in Madrid for COP25 were unable to agree on the main objectives of the negotiations and kicked the most important decisions down the road to next year’s meeting in Glasgow, Scotland.

A coalition of countries seeking higher ambition were blocked by a group of big polluters insisting on accounting tricks such as “hot air” credits, opposing help for nations suffering the impacts of climate change, and demanding that human rights protections get removed from the main sections of the agreement that COP25 was intended to resolve. One of the main breakdowns centred on Article 6 which covers international accounting for climate pollution and credits between countries. The Canadian Association of Petroleum Producers along with politicians like Jason Kenney and Andrew Scheer, had been making misleading suggestions that Article 6 could be used to give Canada credit for exports of LNG and other fossil fuels.

The “High Ambition Coalition” includes island countries like the Marshall Islands which are threatened by rising sea levels as well as European countries which, just this week, dramatically strengthened their own climate plans.

Simon Stiell, a minister from Grenada who spoke for the coalition, put blame for COP's failure squarely on the United States, Brazil and Australia. “Lives are at risk here,” Stiell told National Observer. “We know what actions need to be taken but there are a few voices dictating the agenda of the many.”

The European Union's lead negotiator said “there is no way we could accept a compromise that jeopardizes environmental integrity. We need to be ambitious and get to net-zero emissions by 2050, and we can only get there if we start now."

Youth climate advocates have galvanized a worldwide surge in climate concern in 2019. "Our future is literally at stake. We don't have any other choice than trying through all possible means," said Catherine Gauthier, Executive Director, of ENvironnement JEUnesse. Gauthier is leading a class action lawsuit by Canadian youth against the federal government and was in Madrid as an accredited observer of COP25.

The 2019 UN climate negotiations were widely expected to be little more than a stopover on the way to 2020 where countries agreed to announce new, more ambitious plans to limit climate pollution.

Despite those low expectations, there was some hope that the world’s governments would feel compelled to respond to the explosion of public concern in 2019 and frightening new scientific findings. In the end, they did not even live up to the meager expectations.

Catherine Abreu, the lead Canadian watchdogging the UN process, also laid blame for the failure on big polluting countries which "have been able to ruthlessly advance the fossil fuel industry’s profit agenda over our collective futures.”

"While Canadian negotiators were largely constructive on the ground, Canada has a lot of work to do at home to address the gap between its climate goals and its ongoing commitment to expand the fossil fuel industry, which got a lot of international attention here in Madrid,” said Abreu. She called on Canada’s environment minister to "increase Canada’s climate finance contributions and deliver on his government’s election promise to bring a new, more ambitious Paris pledge to COP26 in 2020.”

The United States, Brazil and Australia were the main obstructionists. The United States' role was particularly galling because Donald Trump had already pulled out of the Paris agreement.

[email protected]_Abreu, the lead Canadian watchdogging the UN process, laid blame for failure on big polluting countries which "have been able to ruthlessly advance the fossil fuel industry’s profit agenda over our collective futures," @zerocarbon

But even outside that triad of obstructionists, the negotiations were poorly handled. Much of the blame goes to Chile who held this year's COP presidency. Shockingly little work had been done to line up the issues and troubleshoot predictable sticking points in advance. Even once the negotiations were underway, it was virtually impossible to track the goings-on. “The most opaque COP I have ever seen,” said Elizabeth May.

May said there was an upside in punting Article 6. “No decision at all is preferable to a bad decision here. We did not end up with ... rules that would have damaged the whole Paris effort to hold global average temperature increase to no more than 1.5 degrees."

Representatives from Indigenous and climate groups said the failure of world governments to respond to the climate crisis means that citizens will have to step up action.

It’s been made clear that there is no room for ethics in these international negotiations. The people need to carry the work that negotiators can’t," said Deputy Grand Chief Jordan Peterson of the Gwich’in Tribal Council and Chief Dana Tizya-Tramm of the Vuntut Gwitchin First Nation.

“It wasn’t just that the COP25 outcome was a disaster. It was also demoralizing and enraging to see countries erase human rights and the rights of Indigenous Peoples... It will be up to people in Canada and around the world to continue to mobilize,” said Environmental Defence's Dale Marshall.

When the heads of state arrived along with federal and subnational ministers, thousands of negotiators, experts and observers, the entire city was ready. Madrid’s elegant buildings and avenues were festooned with creative artwork highlighting the climate challenge. Enormous LED signs lit the Gran Via. Delegates were given passes to an impressive metro system, its subway cars decked out in climate wraps and stations covered with billboards. The massive conference centre was highly organized as if plans and preparations had been underway for many months if not years.

When Canada’s negotiators return, exhausted, to Ottawa, they will soon have to decide whether or not to approve Teck Resources Limited's mega mine in the Alberta oil sands. That will be the next big test of whether our federal government’s commitment to climate action leaves us energized or enraged.

Strikes me as proven

Strikes me as proven-pointless to discuss "emissions" at all; everybody says they will, by some magic presumably, continue to meet their economic needs that must be met to keep them in power, while "reducing emissions".

The serious question is "how do we replace carbon solutions with green ones"? I would give a crap about a meeting where they discussed how long it would take to switch over all cars and light trucks to battery and/or hydrogen power, if they tax gasoline even more heavily and use the money to subsidize the replacement. Where they discussed how to systematically shut down natural gas for home and office heating in favour of heat pumps - and how they would generate all the new electrical demand with green generation. Where they didn't bother to discuss shutting down coal generation, that's happening for free; but did discuss how to smelt iron or and make steel without metallurgical coal.

I just don't see concrete discussions like that happening; I don't see the possibility of such discussions even being raised, because they are terrifying discussions (for the owners) about shutting down trillion-dollar industries. The horror of that is why we just run around in circles as if protesting and talking were going to complete these multi-trillion-dollar groups of megaprojects. They're literally "unthinkable", up at the top.

Until I see discussions about relevant topics, all of these meetings are failures. I remember Kyoto being discussed as some big win, but it was nothing, because the Kyoto Protocol accomplished nothing.

I agree with you, Roy. And I

The question is: will economics of EVs, solar and wind electricity becoming cheaper than conventional electricity etc come quickly enough to save life on earth? Tony Seba, a Stanford Univ energy expert thinks Transportation as a Service (TaaS) using EVs will reduce use of gas cars very quickly once approved. This will reduce gas use enough to eliminate the Canadian tar sands, offshore oil, and other expensive fossil fuel extraction. Look up his youtube videos.

With democracy (which is good

With democracy (which is good), politicans are also scared of being voted out for being "extreme".

There's a growing body of

There's a growing body of climate-apocalypse futurist literature including (possibly unlikely) worst case scenarios instead of the usual soft peddling we get in most of the press and elsewhere (some feel that even the alarming IPCC reports regularly understate the case). One famous example is David Wallace-Wells' "The Uninhabitable Earth", but there's been tons before and since. There's also lots of discussion about radical political and/or technological solutions, most of which, as far as I can see, involve some kind of radical change to power structures and governance, top to bottom. For my part, this is where I plan to focus my reading for the next while, as it seems inevitable that the crises will continue coming faster and furious-er all the time and as Roy points out, we'd better start imagining the future(s) in more vivid hues and more logical chains of cause and effect.

The facts, research, and science behind the climate-change article that explored our planet’s worst-case scenarios.
By

Oops. a little copy and paste

Oops. a little copy and paste sloppiness. Still. The info's good, I hope, if the format a bit garbled. tc

Also politicians don't want to admit how bad things are because decisions by most of them led to our present situation.