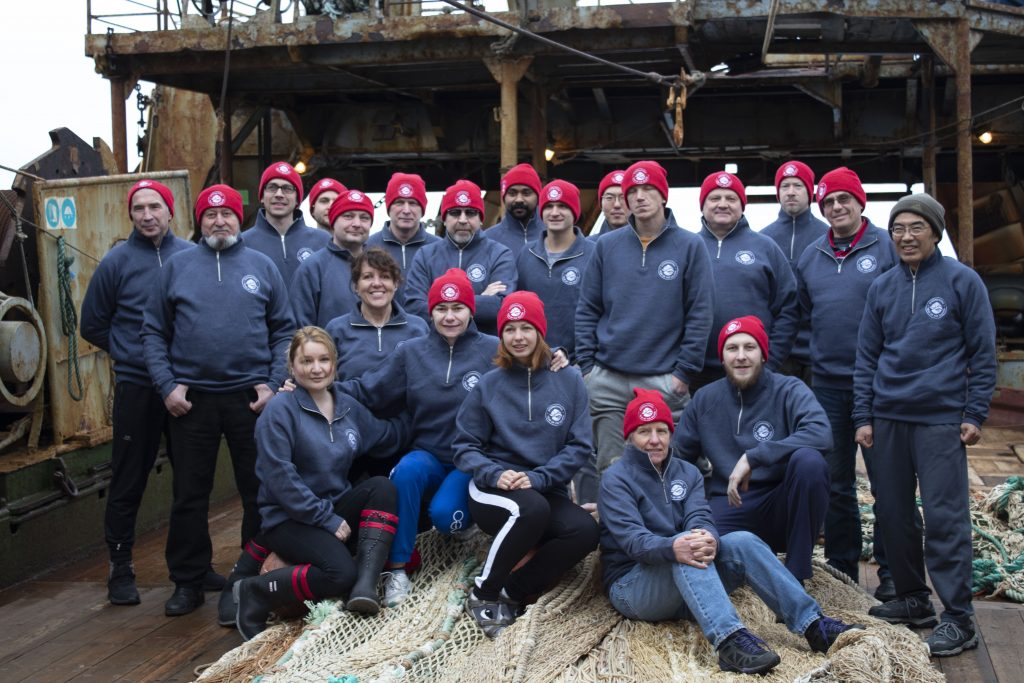 On a late night last February, oceanographer Brian Hunt walked onto the deck of the RV Professor Kaganovskiy and looked out upon the unseasonably calm waters of the Gulf of Alaska. What he saw in the night ocean surprised him: the ship was surrounded by glowing golden jellyfish, their bell-shaped hoods illuminated by the ship’s floodlights.

It was a “mega swarm” of Chrysaora melanaster, also known as the northern sea nettle. They're a species of jellyfish often found in the Bering Sea, with heads the size of dinner plates and stinging tentacles that trail for three metres.

“I never expected to see that,” says Hunt, who has participated in research expeditions covering five oceans. “I’ve seen jellyfish mega swarms in coastal waters several times, but I have never seen anything like that in the open ocean. It was a phenomenon.”

Hunt, an assistant professor of oceanography at UBC's Institute for the Oceans and Fisheries, was part of a team of 21 international fisheries researchers on the Russian research ship—all trying to understand better why some salmon survive their time at sea, and some don’t.

Northern sea nettles have a voracious appetite for the same small aquatic creatures on which many salmon also rely. Their presence in these waters about 1500 kilometres from Vancouver added to researchers’ questions about the survival of the estimated 55 million Pacific salmon present in this part of the northeast Pacific.

The high-seas science conducted on the Professor Kaganovskiy last February by the International Gulf of Alaska Expedition is currently providing the sharpest snapshot ever taken of the area’s ecosystem. The diverse crew included genomic experts, physical and biological oceanographers, biologists, hydrologists, and more, all hailing from five salmon-bearing nations of the Pacific Rim: Canada, Korea, Japan, Russia, and the US.

Scientists know that all six Pacific salmon species enter the Gulf of Alaska for years at a time, before some return to natal fresh water streams around the Pacific Rim—but what happens during their multi-year ocean migrations remains one of the great mysteries of nature.

Other than data from a series of remote weather stations and a limited 2006 Japanese survey, very little is known about the ecosystem of this vast area of ocean.

Climate change—including phenomena like the oceanic heatwave dubbed "the Blob” that spiked temperatures throughout the northeast Pacific beginning in 2013—is complicating this already shaky understanding of oceanic conditions.

The economic stakes are high when it comes to understanding the lives of salmon. Russian and American fisheries alone caught a combined total of over 950,000 tonnes of Pacific salmon species in 2018—a catch worth billions of dollars.

Meanwhile British Columbia's Fraser River sockeye fishery, one of Canada's most valuable (and part of a wild Pacific salmon industry worth over $55 million annually), had the lowest returns on record in 2019. This crash coincided with massive salmon returns to Alaska's Bristol Bay, the biggest sockeye run on earth. Scientists and fisheries managers need to know why these booms and busts are happening, and the high seas are where many answers may be hiding.

Part of the reason the Gulf of Alaska is something of a black box is the risky nature of taking expedition vessels there: in winter, waves can build over thousands of kilometres of uninterrupted ocean to 20-metre swells, amid winds that can gust to 185 kilometres per hour. Undaunted by the risks, the international team set out to sample more than 60 locations on a grid set across 700,000 square kilometres of open ocean.

The insights they gathered will be shared among them, and enriched by similar survey data gathered elsewhere in the Pacific, mainly by Russian researchers.

“A big part of my interest in this expedition was the idea of having an international body of scientists come together,” says Kristi Miller, one of the world’s foremost marine genetic molecular scientists and head of Applied Diagnostics, Genomics and Technology at Nanaimo’s Pacific Biological Station.

“It’s an opportunity to really build bridges between the salmon and oceanographic research groups in all of these different countries, and possibly beyond the Pacific.”

As it turned out, the weather was on the researchers’ side—mostly. The worst they experienced were winds of 110 kilometres per hour and 10-metre waves.

Laurie Weitkamp, a salmon biologist with the Northwest Fisheries Science Center at Newport, Oregon, says that was plenty bad enough. She compares the experience to “the ship being strapped to a bucking bronco.”

The month-long expedition began in the middle of February. Researchers chose the dead-of-winter timeframe because that season is the least-studied time of year in the high seas—and because the first winter spent in the open ocean is thought to be the leanest for young salmon in terms of food availability.

If a salmon is to survive to return and spawn, the theory goes, their first winter at sea is the most critical test.

Once out on the high seas, researchers dragged a trawl net at over 60 separate sampling locations. Weitkamp oversaw the recording of data at many of the sample points. She remembers excited clusters of scientists, regardless of discipline, crowded around to get a first glimpse of what the trawl net brought in.

Chum, coho and sockeye were the most abundant salmon that came up in their nets. Along with them came 16 non-salmonid fish species and 11 types of squid, but the majority of biomass brought on board—which fits with Brian Hunt’s night-time swarm sighting—was jellyfish.

There were other surprises. Coho salmon are generally thought to prefer coastal areas, but researchers found them in significant numbers over a thousand kilometres offshore. Pink salmon, on the other hand—expected to be plentiful this year, especially in southern waters—didn’t show up in great numbers.

Significant, confusing variations turned up when scientists looked in the stomachs of the fish, says Weitkamp. For example, multiple skinny, starving chum salmon were caught alongside chum that had full bellies and were apparently healthy.

“We were like, ‘Where have you guys been? What are you doing that’s so different?’”

Perhaps the biggest surprise for Weitkamp and her colleagues was the near-total absence of large predators of salmon in the sample trawls. In addition to salmon sharks, thought to be abundant, they expected to see sleeper sharks and possibly even great whites, although no one is sure that the latter range that far north.

“When we go sampling off the Oregon coast we get a lot of dogfish, we get blue sharks, nurse sharks, and in the summer there are thresher sharks. But out there we didn’t get any big sharks, so it’s really puzzling,” says Weitkamp.

An additional point of interest came not from animals but from pollution. Gennady Kantakov, an oceanographer with the Moscow-based Far Eastern Ecological Center, used a specially-designed near-surface net to measure microplastics, and found lower plastic particles than expected.

His collaborator, Matthias Egger, the lead field scientist for the Netherlands-based group The Ocean Cleanup, says they found an average of 9,000 plastic particles larger than 0.5mm per square kilometre; by contrast, concentrations in the North Pacific subtropical gyre, also known as the Great Pacific Garbage Patch, are more than 100 times higher: over one million pieces per square kilometre.

A possible explanation is that the sea surface currents in the Gulf of Alaska turn counter-clockwise and tend to expel material, unlike the subtropical oceanic gyres that typically capture and retain drifting surface materials.

Hunt remains puzzled why there were so many jellyfish in the Gulf—by his calculations, about 1.2 million tonnes of them, mostly concentrated in the northern part of the sampling area. He now believes that the jellyfish originated from shallower waters near the Aleutian Islands, from which they ride currents into the Gulf of Alaska.

“I’d love to know if this is normal or something anomalous,” he says of the mega swarm. “We don’t have the information to get at that yet.”

For Hunt and some of his collaborators, a next step post-expedition is to create a map of the Gulf of Alaska marine food web—one that would shed more light on the complex network of interactions and predator-prey relationships in the ecosystem. By tracking a specific nitrogen isotope that persists in the bodies of all marine life, Hunt will be able to create a first-ever picture of what salmon and many other creatures in the Gulf of Alaska eat over time.

The expedition was the brainchild of Fisheries and Oceans Canada Scientist Emeritus Dick Beamish, who worked with Pacific Salmon Foundation CEO Brian Riddell to privately raise funding from the Canadian federal government, the BC provincial govermment, NGOs, industry and private donors. The expedition was recognized as a signature project of the International Year of the Salmon (IYS), a global framework for salmon conservation and awareness led by the North Pacific Anadromous Fish Commission (NPAFC) and other partners.

​​​Beamish and Riddell hope to pull together another voyage in 2020, and in 2021 the NPAFC and partners—including all five member countries—are planning a five-ship pan-Pacific expedition. The Canadian government and the province of BC have contributed $3 million over three years towards the 2021 cruise as part of the BC Salmon and Innovation fund. These two expeditions would allow a deeper exploration of the data and anomalies seen on the first voyage and help researchers understand how things change over time, and over the full breadth of the North Pacific.

Hunt hopes to be among the researchers on future missions, as does Weitkamp, who says it will take at least five consecutive trips to be able to put this year’s findings in any sort of context.

“We went out there just this one time in winter. Imagine going to New York City on New Year’s Eve—you’re going to get a very different perspective of what the city is like than if you go to the same place on a Monday night in November.”

Editor's note: This story was made possible by support from Tides Canada, the North Pacific Anadromous Fish Commission and the Pacific Salmon Foundation.

Just think that less than a

Just think that less than a hundred years ago we had one of the greatest fisheries in the world, both east and west coast. We had the DFO to monitor and research and essentially all they were able to do was document the decline while politicians interfered with the science, often overruling catch limits, allowing destructive practices such as bottom trawling and in BC allowing logging and mining to clog just about every small stream. Now we have a global fleet that is extracting far more than can ever naturally recovered and add to that the disruptions to stocks by global warming and it seems we are on the edge of total collapse. A global moratorium on many fisheries, as well as habitat restoration would help, but we have to cough up the money to pay fishers to stay at home. We've not had a good track record at global solutions since the ozone hole.

Take the unemployed fishers, miners, loggers and put them to work restoring streams. replanting forests, "cleaning up" the spilled toxins that leach through our soils, streams, and wind up in the seething stew our oceans have become.

We owe planet earth debts it will take many generations (maybe millennia) to repay.

Canada and the other Pacific

Canada and the other Pacific Rim countries are making the most paltry contributions to the essential scientific understanding of Pacific Ocean Health. Nothing good can come from money thrown at fisheries and aquaculture if we don't understand the actual living conditions for ocean dwellers. Since our lives depend on this type of knowledge, I respectfully suggest that governments stop throwing tax payers money at the polluters and resource asset strippers and make a real investment in the survival of life forms on this earth.