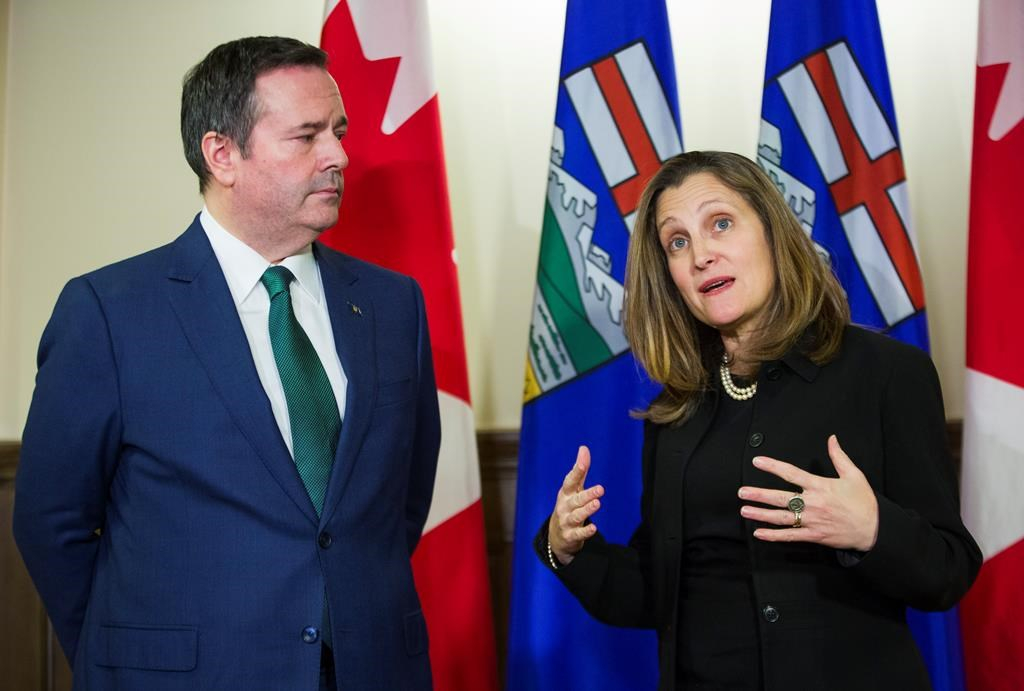 "We've identified some urgent priorities for Alberta," Kenney said before the two headed into a meeting in Calgary on Tuesday.

He reiterated that his United Conservative government is looking into ways — potentially its own pension plan and police force — for Alberta to have more autonomy from Ottawa.

The Liberals held on to power in October's federal election, but were reduced to a minority mandate and were shut out of Alberta and Saskatchewan. There is anger in the oil-producing prairie provinces over what some believe is their outsized contribution to Confederation and a lack of federal support for the petroleum sector.

Freeland, who has Alberta roots and is also the minister of intergovernmental affairs, has been tasked with helping smooth Ottawa's relationship with the West.

"I'll be conveying to minister Freeland that I appreciate the continued outreach by the government of Canada," Kenney said. "However, Albertans do want to see some concrete action early in 2020 to demonstrate that we can find common ground in the federation."

Freeland said she expected the two would talk about the provincial carbon tax on large emitters, methane regulations and the new North American free trade agreement.

"We've really started to roll up our sleeves and get some concrete things done," she said.

Calgary Mayor Naheed Nenshi said he and Freeland had a "terrific conversation" during their own meeting at his office Tuesday.

He said his being able to speak with Prime Minister Justin Trudeau and five ministers in Ottawa when the new federal cabinet was announced in November shows the Liberal government is taking Alberta's concerns seriously.

"That said, the proof is always in the pudding and it really is clear that there are some things that we need from the federal government."

He said he pressed Freeland on economic development opportunities that could arise from the new free-trade deal. He is also urging more federal investment in infrastructure, housing and innovation.

"There's a lot that could be done beyond the stuff that's grabbing the headlines about fights between the province and the feds, and that's really where I'm focused," said Nenshi.

"Fundamentally, this is a question that transcends politics. It's not about, 'You lost all your seats in Alberta.' It's about, 'If the Alberta economy doesn't work, then the nation doesn't work.'"

This report by The Canadian Press was first published Jan. 7, 2020

One is consumed with fears

One is consumed with fears that Kenny's definition of concrete action in Alberta means only one thing - continuing to pimp the province out to the Oil/Gas plutocracy of exploitation - allowing ever more destruction of the province's natural resources and exploitation of its citizens.

In Alberta, Conservatives really do want more independence from Ottawa