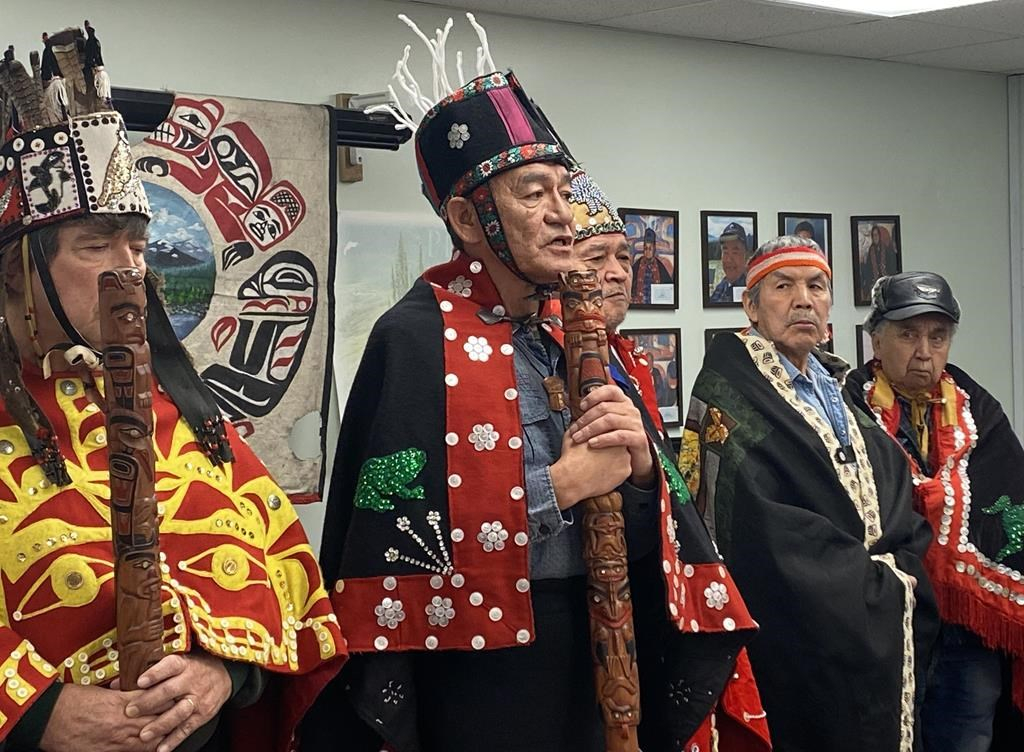 Na'moks held a press conference in Smithers, B.C., on Jan. 7, 2020, on the one-year anniversary of RCMP enforcement of an injunction granted to Coastal GasLink. Photo by The Canadian Press/Amy Smart
Previous story
Next story

On the first anniversary of the RCMP's enforcement of an injunction against opponents of a natural gas pipeline in northern British Columbia, First Nation hereditary chiefs said the company behind the project is not welcome on their traditional territory.

Chief Na'moks said Tuesday there will be no access to the territory without the consent of the chiefs, who are demanding the province stop construction of the pipeline and that the RCMP withdraw from their land.

"If they wish to force their way on, that is not our choice, that is theirs," Na'moks told a news conference.

"We are peaceful but we will protect our territory."

Na'moks said Coastal GasLink is not allowed on the First Nation's 22,000 square kilometres of traditional territory and its leadership is unwilling to meet with the company.

Coastal GasLink has received approval from the provincial government to build a 670-kilometre pipeline from northeastern B.C. to LNG Canada's $40-billion export terminal in Kitimat. The company signed agreements with all 20 elected First Nation councils along the route, but the hereditary chiefs say the project doesn't have authority without their consent as well.

On Dec. 31, the B.C. Supreme Court granted another interim injunction to the company against members of the First Nation and supporters who oppose the pipeline.

In an interview, Na'moks said relations haven't improved since 14 people were arrested by police and a checkpoint built on the road leading to a work site was dismantled on Jan. 7, 2019.

The hereditary chiefs issued an eviction notice to the company on the weekend. Na'moks said trees were felled across the road leading to the work site for the safety of local residents.

Coastal GasLink declined an interview request but in a statement it said work could be delayed in an area at the centre of the dispute, but it is ready to resume construction. It added that it is willing to "discuss issues of importance" with the chiefs.

The company is resuming work generally across the pipeline right-of-way, but it believes "dialogue is preferable to confrontation" and will delay workers returning to the area while a negotiated resolution remains possible, it said.

"If there are going to be meetings, it will be between the decision-makers," he said, adding that includes the provincial and federal governments, as well as the federal RCMP commissioner, but not local governments or the company.

As of Tuesday, he said the First Nation had received no response from any level of government, nor from the RCMP's leadership.

Public Safety Minister Bill Blair's office said in a statement the federal government is aware of the hereditary chiefs' request and it is "hopeful that the parties can come together in the near future to discuss how to resolve this issue."

The Mounties also acknowledged the chiefs' request for RCMP Commissioner Brenda Lucki to get involved, but said she supports Deputy Commissioner Jennifer Strachan, who as the force's commanding officer in B.C. "is well-positioned as our decision-maker in these matters."

"Deputy Commissioner Strachan, along with her senior management team, have been actively engaged in facilitating a discussion with all the stakeholders," the RCMP said in a statement. "That remains our utmost priority at this time and are optimistic that a meeting can take place immediately between the various stakeholders involved to find common ground and a peaceful resolution."

It says police will continue to patrol the Morice River Forest Service Road in the area "to ensure everyone's safety."

Na'moks said the province must address the issue of consent before the hereditary chiefs grant any access to the land.

The provincial Ministry of Energy, Mines and Petroleum Resources did not directly address the demands made by the chiefs, but in a statement it noted that the court has affirmed the company is "lawfully permitted to conduct their work."

"We encourage representatives to engage with the company to achieve a resolution that respects the court's decision and ensures safety for all," it said.

On Tuesday, the hereditary chiefs said they were acting in accordance with their laws on behalf of the five clans of the Wet'suwet'en nation.

"The province has proclaimed they will implement the UN Declaration on the Rights of Indigenous Peoples, which includes free, prior and informed consent, but has failed to intervene in this issue," the chiefs said in a statement.

— With files from Dirk Meissner in Victoria.

So much for reconciliation

So much for reconciliation and informed consent.......seems it only works if the indigenous land owners consent. As for 'informed'.....we should all read up on the level of methane emissions that continue after the gas is fracked out of mother earth..........and consider demanding that along with reconciliation with our native people........we refrain from using language as a tool for domination by other means.

ITS LFG FOLKS...LIQUIFIED FRACKED GAS. The companies doing the fracking are deep in debt.........the fracked gas they've pulled up from deep earth has glutted the market....the potable water ruined in the fracking process is often lost to the hydrological cycle...and the projects these deficit creators keep pushing are being paid for with public money.........in Alberta, public sector pension money is now funding TransCandada's current boondoggle....

Let's use real language to tell the whole story. It's not pretty, but it doesn't spin....for real language reconciliation has nothing to do with coercion. What is it about No, that abusers don't understand???

The product belongs to the foreign entities that extract it, so we're making this unending mess to get foreign (including state-owned, brutal dictatorships) LNG to offshore markets. Why are we so ready to sell our mother -- Nature and the Earth -- to serve multi-national corporations, with no conscience whatever about the raping involved? What, really is the lip--service to 'green' values and First Nations inclusion worth, more than words? Does $40-billion in development investment really make us a fancy "escort" in the monster corporate world, or are we just a desperate, grubby, gussied-up, over-sold whore (with apologies to real whores, who don't have the wherewithall and choices that we do to make different and better trades)?

Consider making a monthly contribution, as I have: http://unistoten.camp/support-us/donate/

I'd be up there with them, if I didn't have to milk goats twice a day. But if you have some time, sign up to stand beside them, on the front line: http://unistoten.camp/come-to-camp/

If you can't do either of these things, perhaps you have some extra things they could use. I'm going to send them some of our goat cheese! http://unistoten.camp/support-us/wishlist-needslist/

I have no native blood. But with climate change and fossil resource depletion coming up on us fast, it seems the hereditary chiefs of un-ceded lands could be the last hope for stopping the trashing of the planet.

Why send money to environmental organizations in New York, San Francisco, Washington DC, or even Vancouver, when you can send it directly to the people on the front lines, who will use it to eat and maintain their shelter on the blockade, not on lawyers and useless lobbying of politicians!

The "suits" in all the environmental organizations in the world have been helpless to stop the raping of the planet. You are our last hope, brave Wet'suwet'en!

These chiefs come from a long

These chiefs come from a long line of chiefs trying to educate the invaders about their land and rights.

This link is to a note from their forebears, sent in 1884, to the government in Victoria. When will we hear and heed Or will colonial practices, in modern dress and parlance, continue unabated.