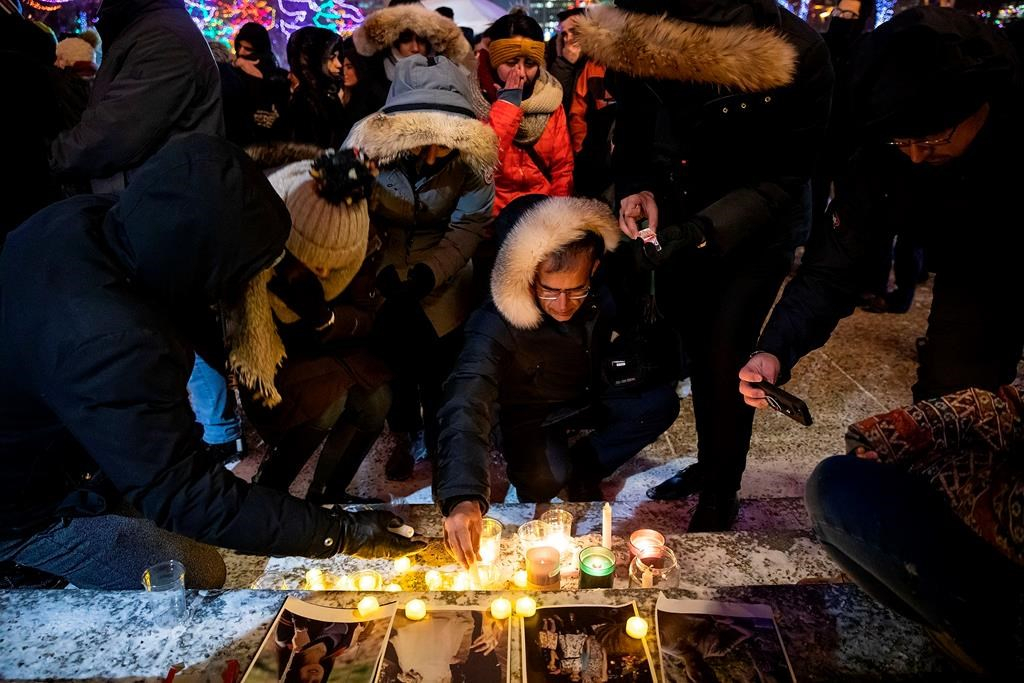 Mounting questions surrounding the circumstances of a plane crash outside Tehran that left no survivors fuelled confusion, fear and anger Thursday among those grieving the deaths of dozens of passengers bound for Canada.

Prime Minister Justin Trudeau said intelligence from multiple sources indicates the Ukraine International Airlines flight was downed by an Iranian surface−to−air missile, echoing statements from Ukrainian officials and U.S. President Donald Trump earlier in the day. Both Trudeau and Trump said the strike might have been unintentional.

The prime minister has said 138 of the 176 passengers aboard the Kyiv−bound plane that crashed Wednesday morning, local time, had a connecting flight to Canada, and the identities of the dead were slowly coming to light through relatives, friends and employers.

When Hassan Shadkhoo learned his wife Sheyda Shadkoo, 41, had died in the crash, he flew to Istanbul overnight in the hopes of making his way to Tehran. He was still in Turkey waiting to board a plane as Trudeau spoke of Iran’s possible involvement in the incident.

"It was no accident, no accident," he said through heavy tears after hearing the news. "These are acts of terrorism. My wife was murdered."

Nina Saeidpour, a Calgary real estate agent whose friend, Kasra Saati, was among the victims, said the latest developments made the loss even harder to bear.

"If something like this happened as an accident, it’s much easier to take in than when you hear that maybe it got shot," she said Thursday afternoon.

"It makes it much harder for people to take in and everybody right now in the community is in shock and sad and of course they’re really mad if something like this happened not as an accident. We’re just trying to figure out what happened."

Bijan Ahmadi, an Iranian−Canadian in Toronto and the executive director of the not−for−profit organization Peace and Diplomacy, said the community needs answers, particularly in light of the claims of an Iranian missile strike.

"I’m speechless to explain that," he said. "If that is the case, it will be very difficult for Iranian people to absorb that, to accept that. The impact is huge."

Confusion surrounding the cause of the crash, combined with concern over the escalating political conflict, could deter some Iranian−Canadians from visiting relatives back home, said Majid Zohari, another Iranian−Canadian living in the Toronto area.

"Every single Iranian I know personally has some ties to Iran — to the community, not the regime. So this is a story that unfortunately has a huge impact on everyone, directly or indirectly," he said.

The list of confirmed victims, which included newlyweds, families and university students, continued to grow Thursday as more were identified by loved ones.

Hadis Hayatdavoudi, a student at Western University, was returning from a month−long visit with relatives in Iran — her first such trip since she moved to Canada in 2018 — when she died, her research supervisor said.

Jamie Noel said Hayatdavoudi was on flight 752 so she could be back in Canada in time to act as a teaching assistant for one of his courses.

"She found Canadians were very welcoming to her, coming from so far away, all by herself, a single woman in a strange country with a different language," Noel said, noting that she quickly found community with the other Iranian students in his lab.

Montrealer Shahab Raana left behind a successful career in Iran to come to Canada for a better future, according to his close friend Hamidreza Zanedi.

Zanedi, who first met Raana about 15 years ago in Iran, said his friend posted a selfie from the plane on an Iranian messaging app just before takeoff. He said his friends in Iran have also been in touch with Raana’s family, who are in a "state of shock and sorrow."

Zanedi said Raana was taking courses in Montreal to improve his language skills and gain Canadian work experience. He’d booked a trip back to Iran without telling his family because he wanted to surprise them, Zanedi said.

A public outpouring of grief continued in Canada with mourners across the country planning candlelight vigils and other events to honour the dead.

Vigils were scheduled Thursday evening on Parliament Hill, in Toronto’s north end and in Halifax. A memorial service was also planned Friday at the University of Windsor, which lost five members of its student and research community in the crash.

Hundreds gathered across the country on Wednesday night to mourn in the bitter cold in Edmonton and Toronto.

Early Thursday morning, Iran released an initial investigative report about the crash, which is among the deadliest air disasters involving Canadians.

The jetliner’s crew were trying to turn back for the airport when the burning plane went down, the report says, noting that they never made a radio call for help. In emergencies, pilots typically immediately contact air−traffic controllers.

Eyewitnesses, including the crew of another flight passing above it, described seeing the plane engulfed in flames before crashing, the document says.

The crash caused a massive explosion when the plane hit the ground, likely because the aircraft had been fully loaded with fuel for the flight to Ukraine’s capital city.

The document also says that both of the black boxes that contain data and cockpit communications from the plane have been recovered, though they sustained damage and some parts of their memory was lost.

In the report, Iran says it is inviting Canada and all of the other countries affected to participate in the investigation. Ukraine’s government has said the plane was carrying 63 Canadians, 82 Iranians, 11 Ukrainian passengers and crew, 10 Swedes, four Afghans, three Germans and three Britons.

Under rules set out by the International Civil Aviation Organization, the countries where the crash happened, where the plane is registered, where the plane’s operator is located, and where its manufacturer is based are all part of the investigation.

In this case, the Aircraft Accident Investigation Board of the Civil Aviation Organization of the Islamic Republic of Iran is in charge, while Ukraine will assist.

The secretary of Ukraine’s Security Council told Ukrainian media that officials had several working theories regarding the crash, including a missile strike.

U.S. President Donald Trump said Thursday that he believes Iran was responsible for the crash, dismissing the country’s initial claim that it was a mechanical issue.

"Somebody could have made a mistake on the other side," Trump said, noting the plane was flying in a "pretty rough neighbourhood."

Iran’s military denied that a missile hit the airplane in a comment reported Wednesday by the semiofficial Fars news agency. They dismissed the allegation as "psychological warfare" by foreign−based Iranian opposition groups.