Australia’s wallabies, recovering from fires, fed by carrots falling from the sky 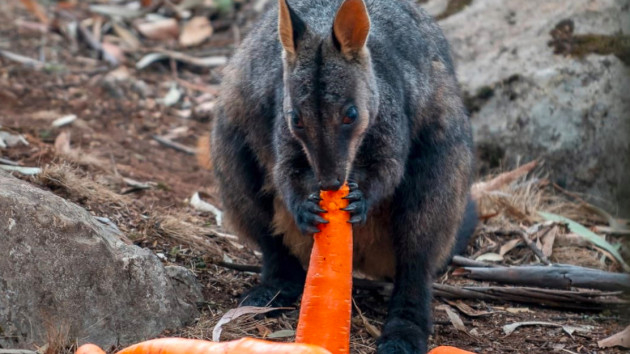 Thousands of pounds of carrots and sweet potatoes are falling from the sky in Australia, air-dropped to help feed the Brush-tailed Rock wallabies whose habitats have been devastated by massive brushfires.

The wallabies, agile marsupials that use their furred tails for balance while climbing trees and vertical rocks, tend to survive fires. But their vegetation is often destroyed, according to the New South Wales government, which on Sunday announced it was coordinating helicopter drops in the state as part of recovery efforts. New South Wales Environment Minister Matt Kean shared photos of the hungry marsupials on Twitter:

Brushfires happen every year in Australia but are particularly horrible this year, following record-breaking temperatures and months of severe drought that experts believe are exacerbated by climate change. The blazes have ripped through brushland, wooded areas, and national parks, and have destroyed entire towns. New South Wales has been the hardest hit state, with more than 1,500 homes burned down.

In Operation Rock Wallaby, more than 4,000 pounds of sweet potatoes and carrots are being delivered to colonies in several valleys and national parks. Here’s hoping it helps the little marsupials recover.

Thousands of kilograms of carrots and sweet potato are being delivered to endangered Brush-tailed Rock-wallabies in fire affected areas as the NSW Government steps in to help. #9News pic.twitter.com/Vw3SnMUejL