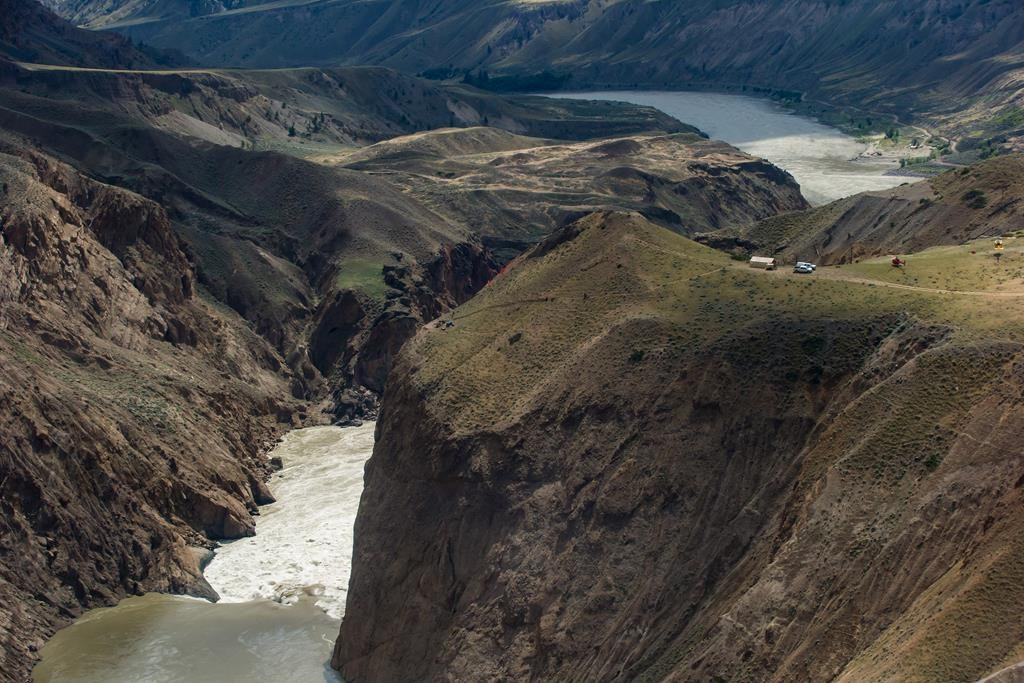 Workers are seen on the cliff at the site of a massive rock slide on the Fraser River near Big Bar, west of Clinton, B.C., on Wednesday, July 24, 2019. File photo by The Canadian Press/Darryl Dyck
Previous story

Federal Fisheries Minister Bernadette Jordan says construction will begin soon to help salmon pass through a section of British Columbia's Fraser River that was largely closed by a landslide.

The federal contract posted online Monday awards $17.6 million to Peter Kiewit Sons ULC for work on the landslide near Big Bar while there is a low water flow on the river.

The slide sparked a co-ordinated emergency response from multiple levels of government and local First Nations after it was discovered in June northwest of Kamloops.

The federal government said in procurement documents in November that the work had to happen during the first available period of low water flows between December and March, although the contract was not awarded until Dec. 31.

A request for information from industry about construction and environmental remediation said the situation is urgent and several Pacific salmon species could face extinction as a result of the slide.

Jordan said in a statement that she plans to visit the site this week and will make an announcement on next steps to ensure the long-term sustainability of key salmon runs.

"There is no higher priority for me and for my department in British Columbia than addressing the Big Bar landslide on the Fraser River," she said.

During her visit to B.C., she will also meet with First Nations and other stakeholders, she said.

In early December, Sarah Murdoch of the Department of Fisheries and Oceans said water levels were beginning to drop on the river, presenting the only opportunity to remove enormous amounts of rock blocking salmon migration routes before spring and summer runs arrive.

She said there would likely only be an open window until mid-March when the flow is low, but officials were also facing difficult winter conditions.

At the time, the government said more than 275,000 salmon managed to get past the slide. Of those, about 245,000 passed through naturally, while others were transported to their spawning grounds by helicopter and other means.

In September, the federal department adjusted the number of returning Fraser River sockeye expected in 2019 to a little more than 600,000, down from an earlier projection of nearly five million.

The populations most affected by the slide have been early Stuart sockeye, two groups of spring and salmon chinook and the Interior Fraser coho population, she said.

Officials transitioned from emergency response to making longer term plans at the end of September but Murdoch warned that clearing the slide could take years.

By The Canadian Press in News, Politics | December 10th 2019
State Of The Animal

By Amy Smart in News, Politics | December 1st 2019
State Of The Animal