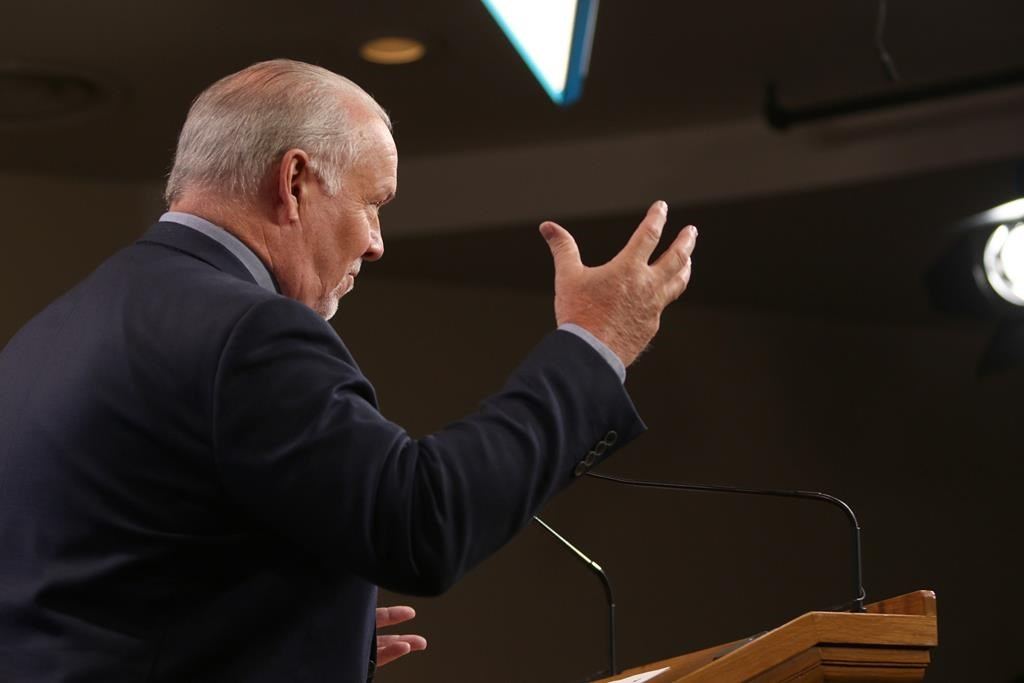 Premier John Horgan holds his first press conference of the year as he comments on various questions from the media in the Press Gallery at B.C. Legislature in Victoria, B.C., on Monday, January 13, 2020. Photo by The Canadian Press/Chad Hipolito
Previous story
Next story

A natural gas pipeline across northern British Columbia is vital to the region's economic future and it will be built despite the objections of some Indigenous leaders, Premier John Horgan said Monday.

He said the courts have ruled in favour of the project and the rule of law will apply to ensure work continues on the Coastal GasLink pipeline, which would start near Dawson Creek and extend to an export terminal at Kitimat.

The 670-kilometre pipeline is part of a $40 billion LNG Canada project.

Horgan told a news conference the project has received approval from 20 First Nations along the pipeline route.

"We want everyone to understand that there are agreements from the Peace Country to Kitimat with Indigenous communities that want to see economic activity and prosperity take place," he said. "All the permits are in place for this project to proceed. This project is proceeding and the rule of law needs to prevail in B.C."

Hereditary chiefs from the Wet'suwet'en Nation near Smithers say the project does not have their consent. Supporters of the chiefs have felled trees along a road to a Coastal GasLink work site and are building a new support camp.

They already occupy two other camps along the road. The Unist'ot'en camp and the Gidimt'en camp, where the RCMP enforced an injunction last year and arrested 14 people.

A B.C. Supreme Court judge extended an injunction against Wet’suwet’en members and anti-pipeline supporters on Dec. 31.

Coastal GasLink posted the injunction order last week giving opponents 72 hours to clear the way to its work site. The company said it was up to police to determine the "timing and manner of enforcement of this order."

The RCMP began restricting access on Monday to the area where the court injunction applies.

The Mounties say a police checkpoint was set up at the 27 kilometre mark of a forestry road into the area because of safety concerns stemming from the trees that were felled across the road and tire piles that were recently found with gasoline and other fuels inside.

Those entering the area on the road are being stopped by police and given a copy of the court's injunction, as well as being informed about hazards and road conditions.

The RCMP said those being allowed to enter must have permission from the RCMP's operations commander, which generally includes hereditary and elected chiefs, elected and other government officials, accredited journalists from recognized media outlets, and those providing food, medicine or other supplies.

The RCMP said its commanding officer in British Columbia has been involved in a series of meetings and more are planned with the hereditary chiefs, elected band councils and others with an interest in the pipeline.

"It was emphasized that the primary concerns for the RCMP are public and officer safety," it says in a statement released on Monday. "Our duty is to preserve the safety of everyone involved in this dispute, and to prevent further contraventions to the B.C. Supreme Court ordered injunction."

The Wet'suwet'en hereditary clan chiefs have asked the RCMP not to use force against the pipeline opponents who are facing the injunction order.

Horgan said Indigenous Peoples in B.C. have used the courts to successfully assert their rights and title, but in "this instance the courts have confirmed that the project can proceed and will proceed."

The UN declaration says Indigenous Peoples have the right to self-determination, which means they can determine their political status and pursue economic, social and cultural development. It requires governments to obtain "free and informed consent" from Indigenous groups before approving projects affecting their lands or resources.

But Horgan says the declaration doesn't apply to the Coastal GasLink project.

"Our document, our legislation, our declaration is forward looking," he said. "It's not retrospective. We believe it will open up opportunities not just for Indigenous people but for all British Columbians."

This report by The Canadian Press was first reported Jan. 13, 2020.

Launching a new fossil fuel industry when the science says we have to start reducing our co2 emissions immediately and dramatically in the years ahead is reckless...and dangerous. Australia’s LNG industry has been up and running for many years...and how is that working out for them? Mr. Horgan and the NDP have betrayed voters who want real action on climate change.

Meanwhile, Horgan and company are in court today, seeking to stop shipment of dilbit through the proposed Trans Mountain Pipeline expansion. Hypocrite!

I guess the cynical difference is that TMX passes through NDP voters' back yard, while the Coastal GasLink pipeline passes through… empty terrain, as far as he is concerned. SHAME!