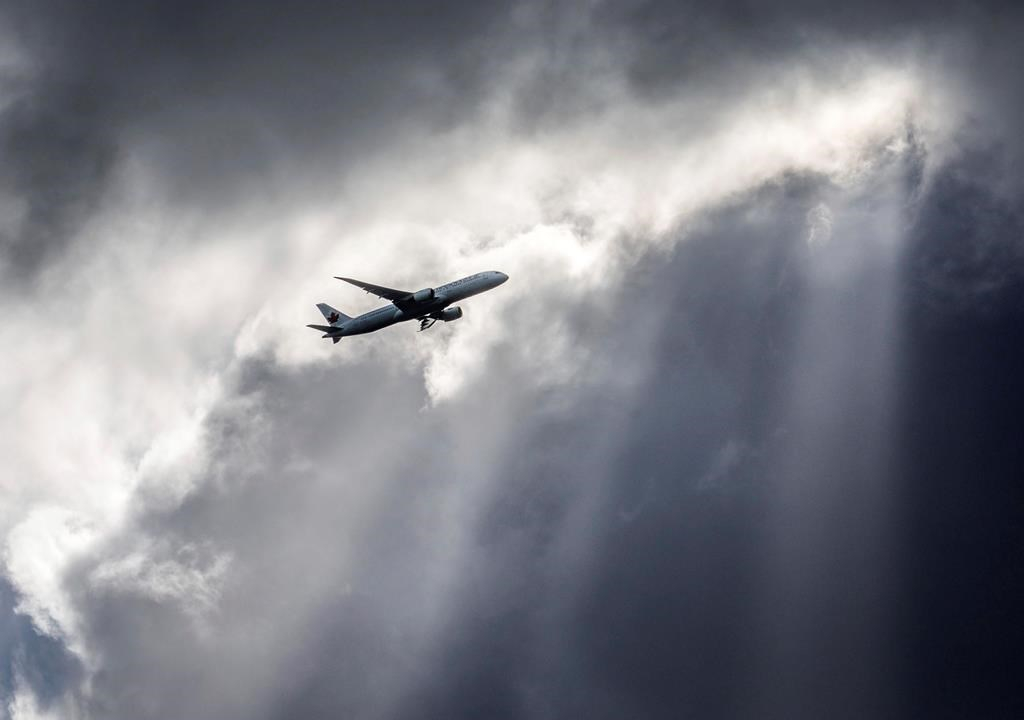 An Air Canada plane flies underneath dark clouds illuminated by some sun rays above Frankfurt, Germany, on Thursday, March 2, 2017. File photo by The Associated Press/Frank Rumpenhorst/dpa via AP
Previous story
Next story

Questions about how and when planes are permitted to fly have been raised in the aftermath of the deadly crash of a Ukrainian airliner near Tehran last week that killed all 176 people on board.

Experts say the crash, which happened after the plane was hit by an Iranian surface-to-air missile, points to a glaring gap in rules around flight security, with countries sometimes failing to close their own airspace amid a lack of authority by global agencies.

Transport Canada said last week that Canadian carriers were complying with U.S.-led restrictions on commercial flights in Iraqi, Iranian and some Persian Gulf airspace amid heightened tensions between the U.S. and Iran affecting the region. But not all countries' aviation agencies instructed their carriers to steer clear, and Iran failed to ban civilian travel even as its military was on high alert.

Countries often hesitate to shut down their airspace due to the economic and political turbulence it can create, says Michael Bociurkiw, who was an observer for Ukraine's investigation into the downing of a Malaysia Airlines flight in 2014.

"Closing your airspace is quite extreme. It scares people away. It scares away business investment, especially tourism," Bociurkiw said.

"Sometimes these things can be politically sensitive and they draw too much attention."

Other problems can result from leaving security alerts in state hands. During unrest in eastern Ukraine in 2014, the country raised its minimum safe altitude to 32,000 feet as a precautionary measure. Three days later, a missile shot down Malaysia Airlines Flight 17, killing all 298 people on board.

States' civil aviation bodies are responsible for shutting down their airspace and instructing domestic airlines to avoid foreign skies in the event of danger, such as military conflict or natural disasters.

However, the passenger planes that took off from Tehran's airport shortly after an Iranian missile strike against two military bases in Iraq where U.S. forces are stationed had received no security warnings from Iran.

Aerospace consultant Ross Aimer is calling for a more active role by the International Civil Aviation Organization (ICAO), a Montreal-based United Nations agency, which he deems "slow to respond" and lacking in teeth.

ICAO says it issues advisories only in disputes over airspace control or military conflicts where "the command-and-control structure has been impaired" and the state is unable to send one out.

"ICAO, which just about every country and airline is a signatory to, should take over and do a better job of warning people any time there’s hostilities," Aimer said.

"When there's hostilities, immediately close the airspace to everybody."

The agency rejected the idea that UN member states would support stricter rules or an encroachment on their sovereignty, citing protocols in its founding document.

"It's the sovereign nation-states...who are very realistically and logically, I think, expected to monitor and assess and publish any risks that they're aware of that may be occurring in their territories relevant to civil aviation operations," ICAO chief spokesman Anthony Philbin said.

States are ultimately responsible for notifying other countries and airlines about conflict zones and other flight hazards, with no heads-up to ICAO required, he said.

Elaine Parker, vice-president of the Canadian Society of Air Safety Investigators, sympathizes with state reluctance to wall off airspace.

"You're shutting down blood flow, basically, into your country," she said.

Parker supports the hard limits on ICAO's authority, saying that "it can't be ... an enforcement agency" but acknowledging there may be room for a broader mandate.

"They do have that capability of basically issuing some kind of warning. They normally don't do that," she added, "but there's nothing wrong with ICAO issuing some sort of an advisory that is worldwide."

Canadian air-crash investigators are being given access to the wreckage of Ukrainian International Airlines Flight 752 and have been tapped to help unlock the contents of the data recorders from the plane.

The Canadian Press has independently confirmed at least 86 victims with ties to Canada, many of them students and professors returning after spending the December break visiting relatives in Iran.

Iran announced several arrests in the in the wake of the fatal crash.

At least four large passenger jets have been shot down over the past 32 years, resulting the deaths of more than 1,000 passengers and crew.