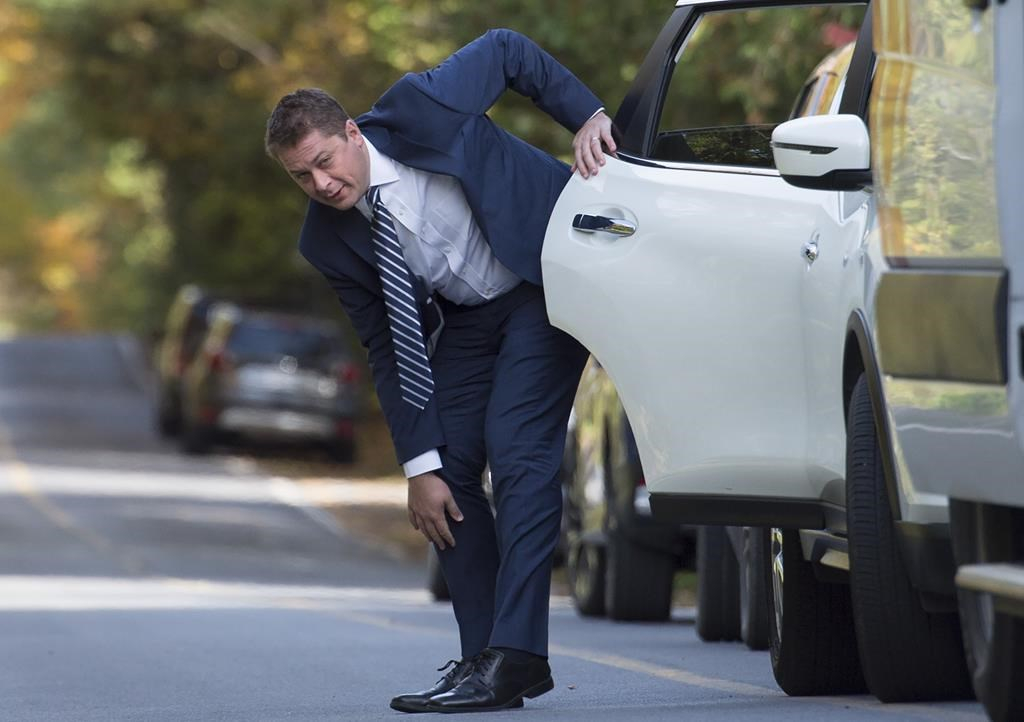 Conservative leader Andrew Scheer stops to fix his pant leg as he gets out of his car prior to making a morning announcement during a campaign stop in Lacolle, Que. on Wednesday, October 9, 2019. File photo by The Canadian Press/Jonathan Hayward
Previous story
Next story

Outgoing Conservative Leader Andrew Scheer's past became a problem during the 2019 federal election, and those vying to replace him will be grilled about theirs.

A copy of the 2020 leadership candidate application form obtained by The Canadian Press asks a number of personal questions about a candidate's history, including one about whether they've ever been accused of improper sexual behaviour.

The party says one of the reasons for the questionnaire is to help plot electoral strategy, but the answer to one question Scheer would have been asked when he ran for leader in the 2017 contest appears to have escaped the planning for last fall's federal election.

Then, and also now, the party asks whether a candidate is or has ever been a citizen of another country.

Scheer is a dual Canadian-American citizen, but that information only became public during the campaign. The issue dogged him for days, along with a suite of other problems that forced his campaign off message.

How the campaign team dealt with that and other issues was studied as part of an external review conducted by former Conservative cabinet minister John Baird.

Scheer said Tuesday he's now received a copy of that report, thanking Baird via Twitter for doing the work.

"Looking forward to reviewing it and sharing feedback with the next Conservative leader," Scheer wrote.

In the aftermath of the election and in the face of much criticism about why he failed to form government, Scheer repeatedly pointed to Baird's review as something he wanted to see before he'd make any changes to his political approach.

But those calling for change did not appear willing to wait, and after sustained pressure, Scheer announced in mid-December that he'd resign as soon as his replacement was chosen.

Baird's report will not officially be made public.

"This is a strategy document prepared for the leader of the party," Scheer's spokesman Simon Jefferies said in an email.

How much the Conservative party knows about its candidates also became an issue in 2018, when revelations surfaced that the party was aware a candidate in the 2015 election had been accused of sexual assault.

Despite knowing of the allegations, the party — including former leader Stephen Harper — allowed then-MP Rick Dykstra to remain on the ballot.

Dykstra has denied doing anything wrong. The police investigation was closed and no criminal charges were laid.

But outrage over the issue prompted Scheer to ask for a review of the candidate vetting process. A year later, a report was released that recommended, among other things, more thorough police and background records checks for those seeking to run as MPs.

The report did not discuss the party leadership process.

The internal vetting effort for that revolves around the application form, and the party's leadership organizing committee also reserves the right to interview potential candidates and reject them.

The question on improper sexual behaviour appears to be the only new question on the form for this campaign.

Among many things, the questionnaire includes requests for criminal and financial records checks, personal references, details of prior experience in politics and public speaking. The party also wants to know how candidates will raise money for their campaigns, what community or interest groups they're close with, and asks many questions about potential legal issues that could end up surfacing.

There are also questions on subjects ranging from why the individual wants to be leader of the party, whether they've ever advocated for a separatist movement within Canada, or have ever been accused of or engaged in activities that promote discrimination or hatred.

Candidates must complete and submit the questionnaire to the party by Feb. 27, along with $25,000 and 1,000 signatures from supporters in 30 different ridings from seven provinces or territories to meet the first of three entry requirements for the race. The remaining fees and signatures must be submitted by March 25.

Party members will elect a new leader on June 27.