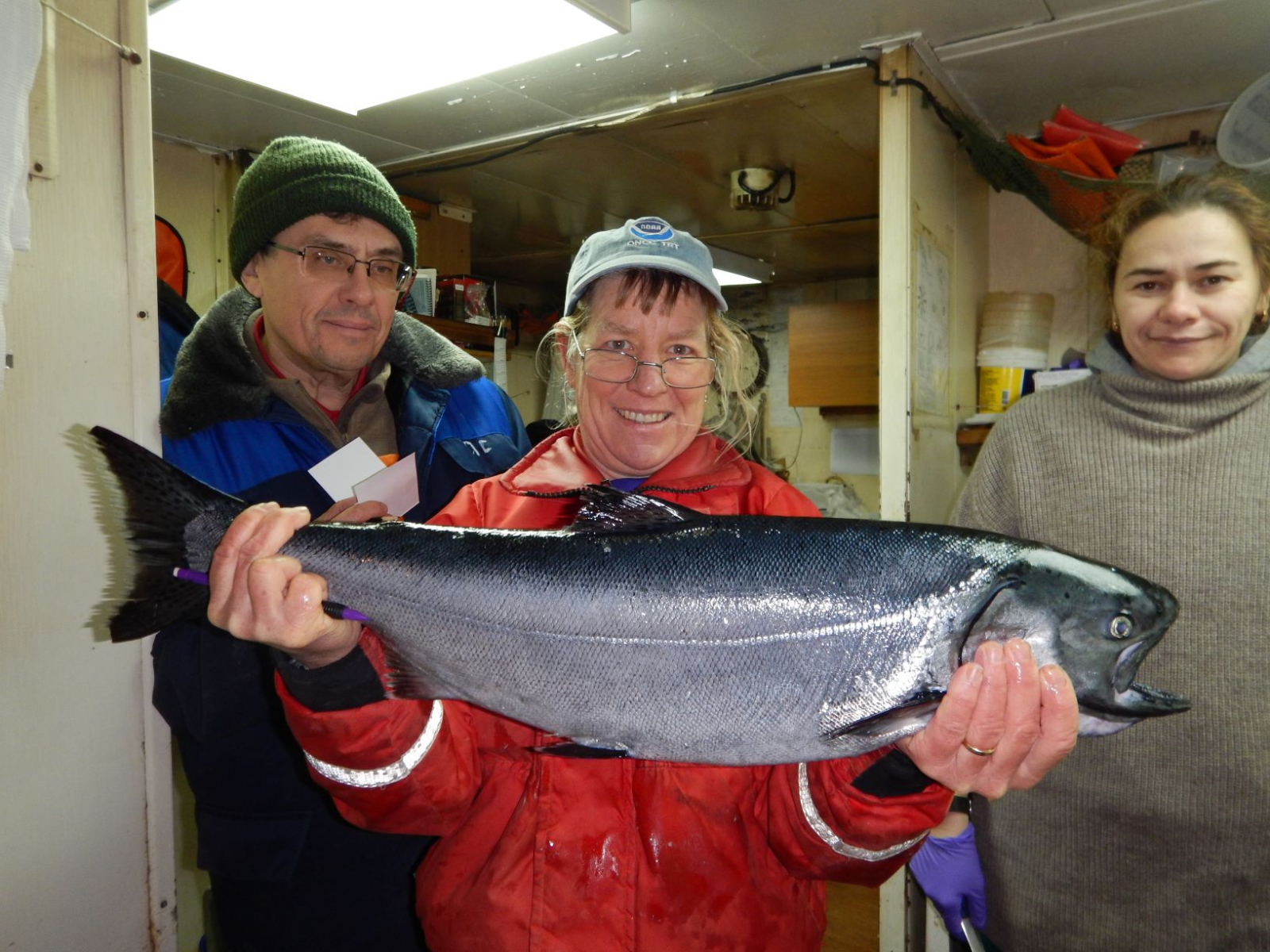 Looking back, Christoph Deeg admits he didn’t know what he was getting into when he accepted a job on a high-seas expedition in the dead of winter on the RV Professor Kaganovskiy.

At the time, the 33-year-old biologist and genomics specialist was fresh off completing his PhD, and he jumped at the chance to join 20 other scientists from five Pacific Rim countries—Canada, Korea, Japan, Russia, and the US.

Taking place over a month beginning in mid-February 2019, the International Gulf of Alaska Expedition was a rare cooperative effort aimed at understanding the environmental underpinnings of salmon health and survival in the Gulf of Alaska.

What happens to Pacific salmon after they leave natal streams and coastal zones to spend years in the Gulf— a 1.5 million sq km expanse of ocean about 1300 km northwest of Vancouver—has mostly remained a mystery to researchers.

Armed with new molecular genetic and genomic technology, Deeg’s task was to play high-seas detective. He collected DNA from salmon to determine their origins, identify pathogens, and measure how multiple climate-related stressors like warming temperatures and changing salinity were affecting them. 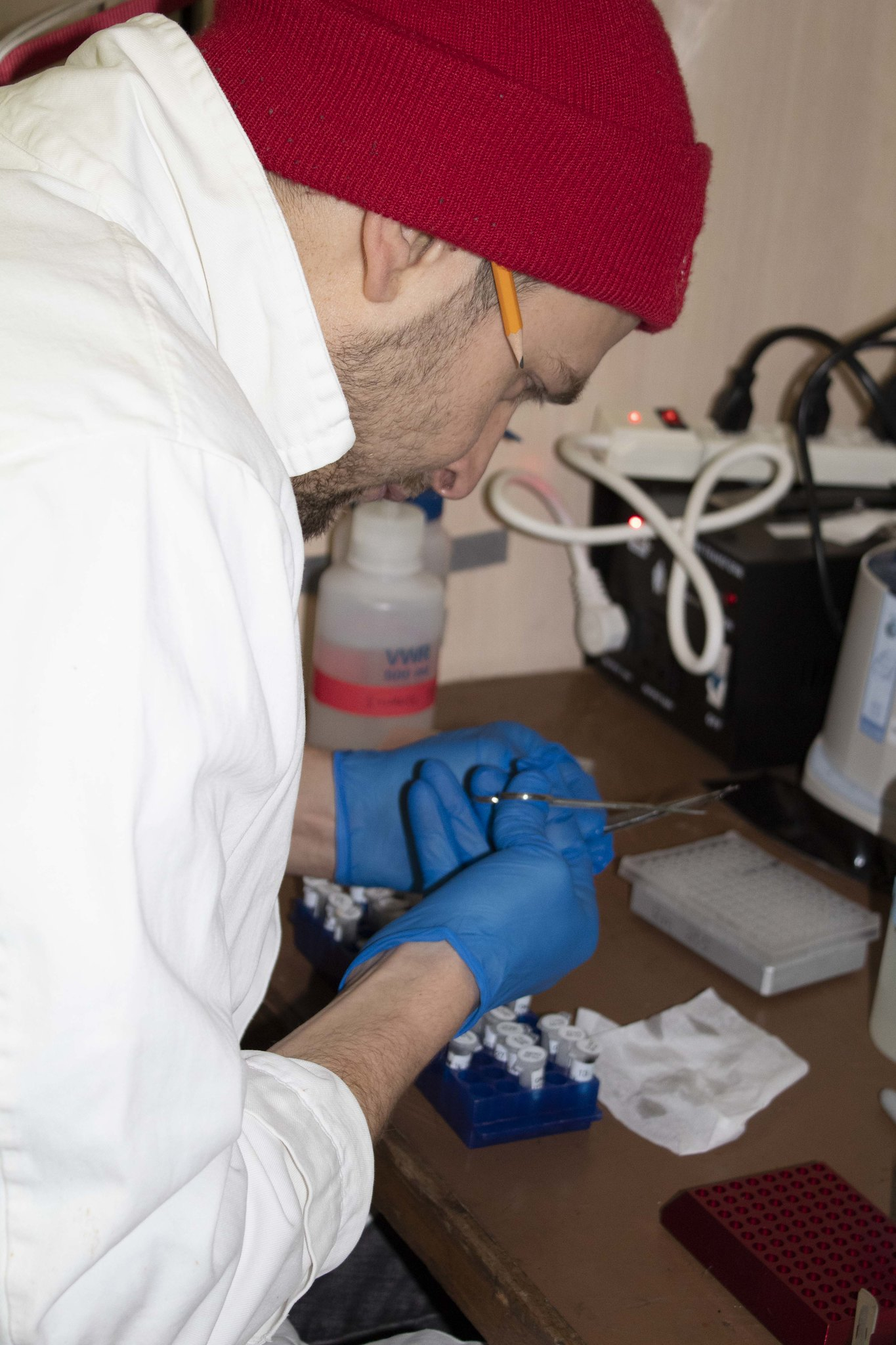 Christoph Deeg at work on the Professor Kaganovskiy. Photo courtesy International Year of the Salmon.

The ship sampled marine life from over 60 locations on a predetermined grid that spanned about 700,000 square km of open ocean.

Deeg, now based at Fisheries and Oceans Canada’s Pacific Biological Station (PBS) in Nanaimo, kept a grueling schedule, sleeping for only a few hours a night for days at time.

Over the voyage, Deeg selected 255 fish representing five salmon species, taking samples from their gills, brain, blood and other organs. These were brought back to the Nanaimo labs for analysis.

Looking back, Christoph Deeg admits he didn’t know what he was getting into when he accepted a job on a high-seas expedition in the dead of winter on the RV Professor Kaganovskiy.

By tracking amounts of a particular nucleic acid, government researchers are examining them for traces of disease and pathogens. The same technology can also determine whether fish are impacted by warmer temperatures, high salinity, and other potentially climate-influenced stressors.

Taking samples of fish tissue for later analysis was only part of Deeg’s workload onboard the Professor Kaganovskiy. Using a suite of new equipment, including a portable genetic sequencer worth about $15,000—in place of similar laboratory tech that could cost over $450,000—Deeg was able to pinpoint the specific natal stream of origin for a number of coho from the Columbia River and Vancouver Island.

He was also able to trace most of the others to northern British Columbia and southern Alaska.

Kristi Miller is one of the worlds’ foremost genetic molecular scientists and head of Applied Diagnostics, Genomics and Technology at PBS. She says the snapshot revealed by the 255 sampled salmon offers researchers an unprecedented opportunity to compare the health of salmon in the Gulf of Alaska with those in coastal environments.

“This is completely brand new,” says Miller. “No one has ever done genetic stock ID on board a ship before. I hired Christoph three months before the expedition with the explicit goal of getting that technology off the ground. We really didn’t know if it was going to work, but he succeeded.” 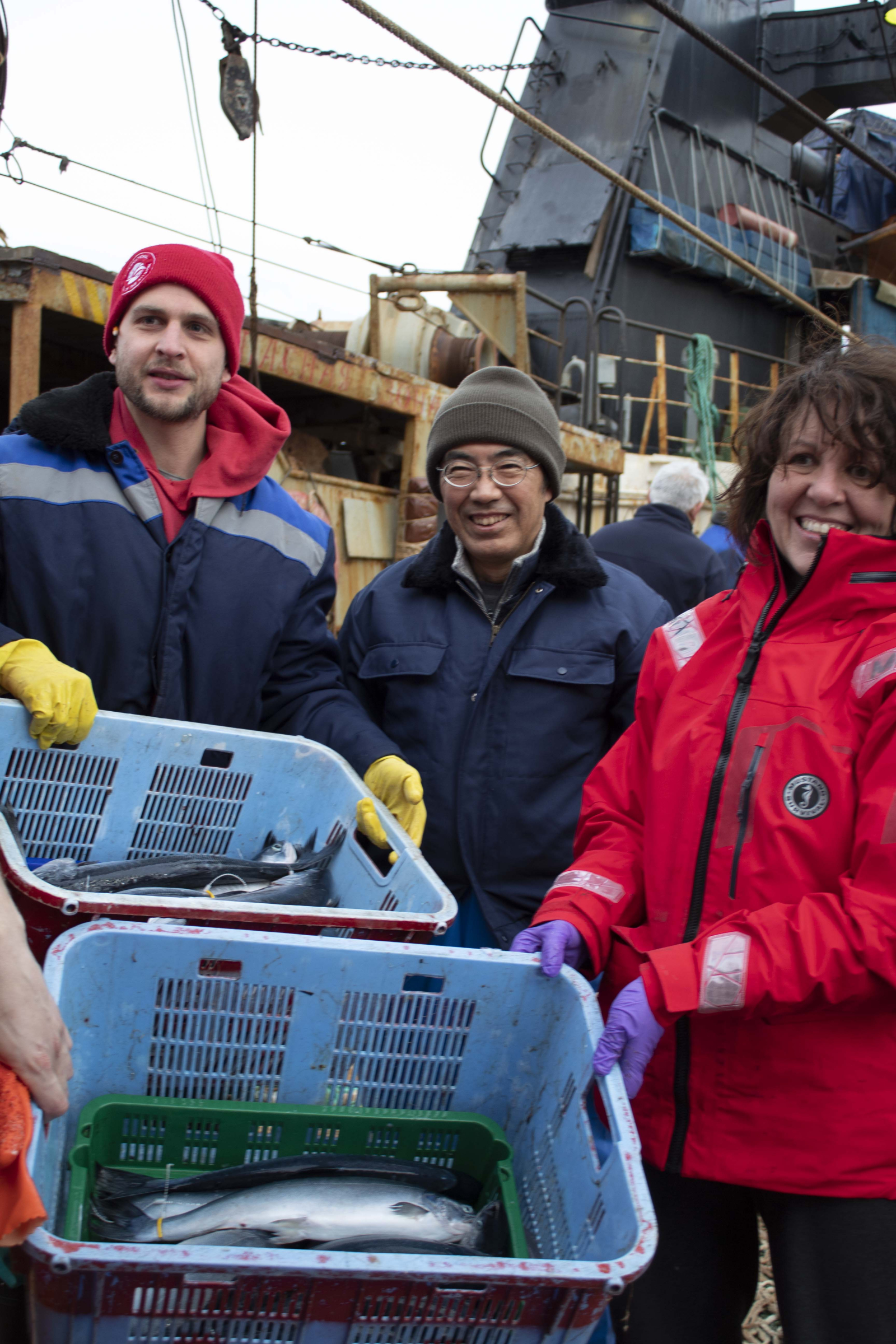 Left to right: Christoph Deeg Hiko Urawa and Chrys Neville of the International Gulf of Alaska expedition show off their catch. Photo courtesy International Year of the Salmon.

The pioneering science meant a lot of hard work for Deeg.

“Usually it has been done by getting the sample to a lab, but our idea was basically to take the lab to the sample.”

Expedition member Laurie Weitkamp, a salmon biologist who works on salmon originating from the Columbia for the U.S. National Marine Fisheries Service, was elated when she learned that Deeg’s work had traced several of the coho to her home river.

“It’s really valuable for people I work with, for people who basically control the Columbia river, to know that our fish are out here,” says Weitkamp, who oversaw the recording of data at many of the sample points.

“Our fish are here, and we have to pay attention.”

Miller says having access to mobile, relatively inexpensive genetic stock ID technology also has the potential to “democratize” such analysis—making it available, for example, to Indigenous groups who manage their own fisheries but can’t afford the high cost of traditional lab equipment.

Such technology will be invaluable for fisheries managers throughout the Pacific Rim, who will be able to more quickly identify the fish stocks they encounter during the fishing season.

Miller says her future goal for using genetic stock ID at sea will not only be to better refine the technology, but to ensure that it is used collaboratively between international researchers.

“We want to make a big difference in terms of understanding salmon in that last big black box in the middle of the ocean,” she says, “and to ensure that every country has the tools it needs.” 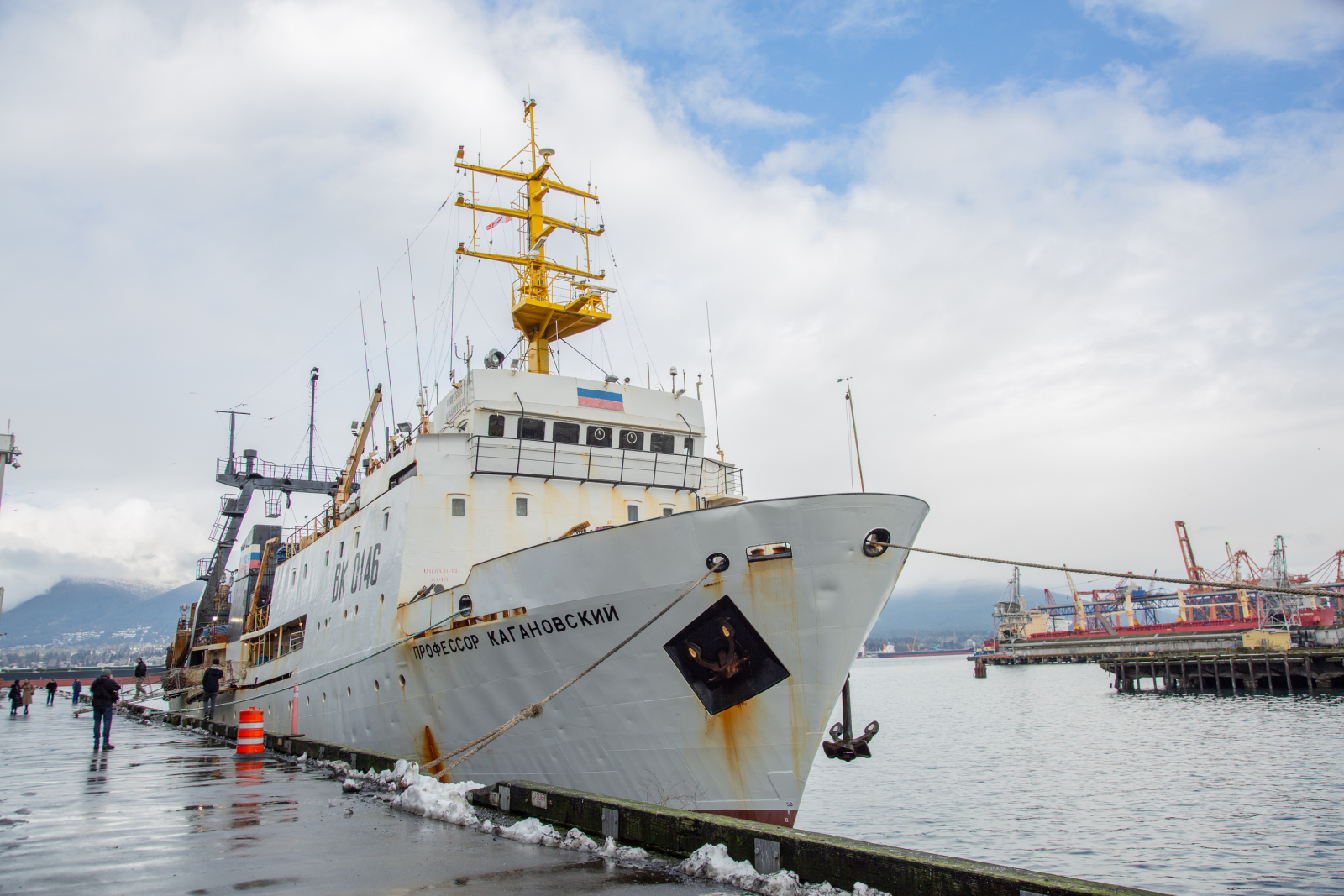 The Professor Kaganovskiy ready for the voyage. Photo courtesy International Year of the Salmon.

eDNA and the mystery of the missing sharks

As the expedition progressed, a mystery emerged that continues to puzzle the science team: virtually no large predators were caught in the nets.

Researchers expected to see a variety of sharks—including sleeper sharks, salmon sharks and even the odd great white shark— in the Gulf of Alaska.

Except for a few specimens of a small shark called a spiny dogfish, however, there were none.

This is where scientists hope another innovation in genomic technology will come to the rescue. Virtually all animals in the ocean, from invertebrates to fish to mammals, shed telltale cells from their slime, blood, flesh and skin.

At every sampling stop, Deeg took water samples and filtered them for cells. Back at the Pacific Biological Station, Miller and her team will extract and sequence the DNA captured in the filters.

This “environmental DNA” (eDNA) approach, says Deeg, will provide them with a more complete picture of all the animals present in the Gulf, and even an educated guess at their respective quantities.

Unlike the trawl net, which captured only three chinook salmon (they swim too deep) and no steelhead (they stick to the surface), Deeg says eDNA “means we can detect every species that was there without bias.”

Miller herself has only been seriously applying eDNA approaches for the past three years, but her team is already getting important results. In a recent study Miller and her collaborators used eDNA to detect potentially harmful algae bloom species, which can wipe out fish farms and aquatic life.

Miller also recently used eDNA during the Canada C3 expedition that sailed from the Atlantic, up through the Arctic, and down into the Pacific, towards creating a pan-Canadian database of coastal marine biodiversity from bacteria to baleen whales.

The vistas opened up by eDNA are exciting, but Miller notes there are limitations.

Bottom-dwelling organisms may not be accurately represented by the water samples taken close to the surface, and some species may shed more DNA than others. As well, cells in ocean water last only about 24 hours before exposure to UV, temperature, and other factors cause them to degrade.

Deeg says that some of his fellow scientists on the ship were initially skeptical of the benefit of eDNA sampling, but now, especially given the mystery of the absent salmon predators, many are now eager to see the results. These are pending and expected to come soon.

Organizers are already making plans to repeat the expedition next year, followed by a larger multi-ship effort in the works for 2021— including, potentially, an entire ship dedicated to genomics work.

Deeg is hungry to do another expedition, comparing his scientific labours on the high seas to the experience of getting a new tattoo. “It’s miserable while you’re doing it, but once it’s done, it’s like, ‘Yeah, that was cool.’”

Editor's note: This story was made possible by support from Tides Canada, the North Pacific Anadromous Fish Commission and the Pacific Salmon Foundation.

By Christopher Pollon | Features | December 16th 2019
State Of The Animal