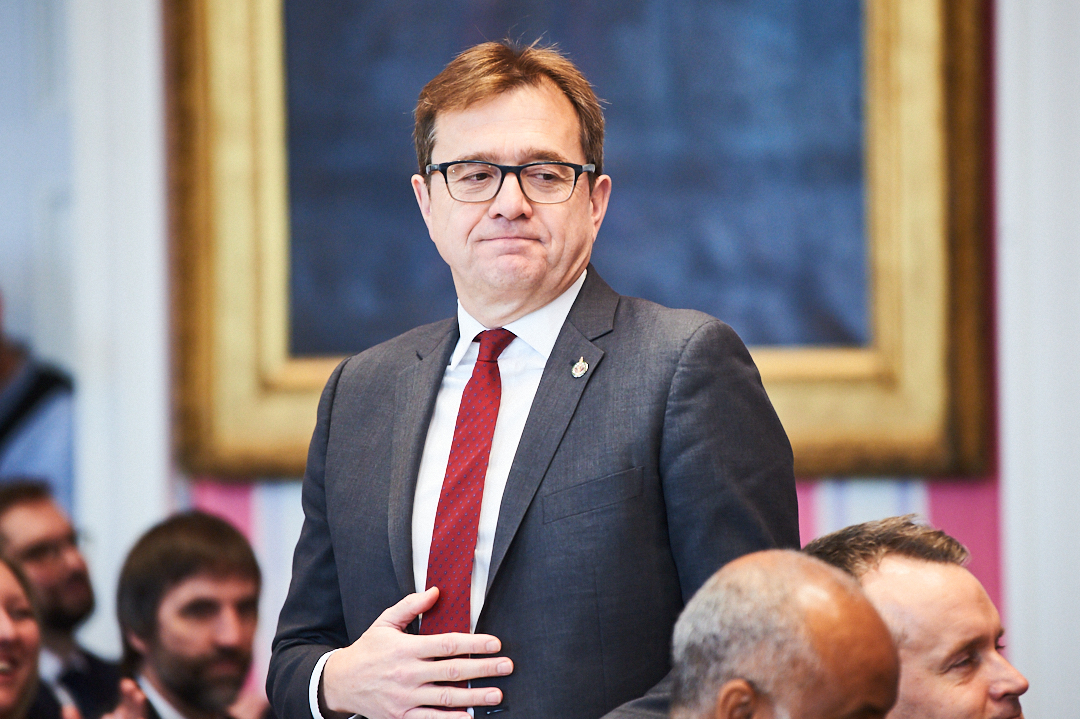 The federal environment minister, Jonathan Wilkinson, stepped away from the Liberal government’s cabinet retreat in Winnipeg on Monday to hand out cheques to two groups working on initiatives related to climate change.

At roughly the same time, his boss — Prime Minister Justin Trudeau — was at a meeting with Manitoba Premier Brian Pallister, who emerged from their chat saying he’s ready to negotiate a way for the agriculture-rich province to avoid Ottawa’s price on pollution.

The two events illustrate two distinct fronts on which the Trudeau government is waging its climate battle: one engages a right-leaning premier testing his leverage in the wake of 2019 elections; the other seeks to engage the grassroots directly, bypassing politics.

Ottawa has imposed an escalating price on carbon emissions in four provinces that do not otherwise meet federal standards: Alberta, Saskatchewan, Manitoba and Ontario.

It was also applied to New Brunswick, but subsequently lifted after that province tightened its own policies following October’s federal election, in which the Conservatives failed to unseat Trudeau’s Liberals with a platform that included getting rid of carbon pricing.

Pallister said he would reconsider a provincial carbon tax, although he did not indicate an appetite to change it from the fixed-rate version Ottawa had previously rejected.

“We believe it should be flat and low like the Prairie horizon,” he told reporters after the meeting.

He said Ottawa should acknowledge the efforts Manitoba has made to reduce its climate impact, including by investing in hydroelectricity.

“We do not deserve to be called climate change deniers by anybody,” he said. “We want acceptance of our made-in-Manitoba green strategies."

He said he would unveil a new green plan “in the not-too-distant future.”

Manitoba’s 2017 climate plan estimates the province can reduce its emissions by a cumulative 2.4 to 2.6 million tonnes between 2018 and 2022. Only one million of those tonnes were to have been reduced by way of its flat $25/tonne carbon tax, which Pallister pulled in protest in Oct. 2018. The rest were calculated to come from other measures, including a rule that diesel must include five per cent biodiesel, the creation of a government agency focusing on energy efficiency and the diversion of organic waste from landfills.

“We do not deserve to be called climate change deniers by anybody. We want acceptance of our made-in-Manitoba green strategies."Manitoba Premier Brian Pallister

Under the federal government's carbon pricing scheme the cost rises annually to the $50 per tonne mark by 2022.

"The ball is back in the feds' court,” David Angus, a strategist with Capital Hill Group in Ottawa, said in a phone interview. "I think Pallister was pretty clear in saying, 'Hey, thanks for coming. We got an offer here, validate it, and we're looking forward to your next steps."

He said one strategy Ottawa might deploy in response could be more supportive policy on agriculture, which is a major economic driver in the province and source of almost a third of its emissions.

"Something like that could give them something to talk about,” Angus said. “But right now, there's nothing for the two to talk about. They're at an impasse because it all comes down to the level of the carbon tax, and they fundamentally disagree."

Wilkinson’s office indicated on Monday that it was looking to use existing extreme-weather programs to help farmers who got dinged by the carbon tax when drying out grain last year.

Wilkinson himself, meanwhile, presented two groups with $100,000 each. That funding came from Ottawa’s $3 million a year Climate Action Fund, which took submissions between late April and mid-May last year, with funding decisions made in the summer.

Assiniboine Park Conservancy will work with youth to identify barriers to climate action and build a social media campaign to address them.

Eco-West Canada will use the money to help small and medium-sized businesses in five municipalities across Manitoba, Saskatchewan and Alberta to better deal with the effects of climate change.

“We're trying to identify the risks and how communities and businesses can adapt to them to increase their resiliency in the changing climate,” Dany Robidoux, the group’s executive director, told National Observer.

He said climate change is dealt with differently on a political level than it is by executives and business owners.

“Unfortunately, politics brings with it rhetoric and semantics,” he said. “But when you look at business, it’s dollars and cents.”

Robidoux hopes his group and other recipients of federal funds can create best practices that then spread more broadly.

“We need to demonstrate how it makes sense. Especially on the municipal side of things, they're very reticent on being the first in without knowing what the outcome is,” he said.

“We need to be able to provide them with a roadmap.”

Dikes, ditches and dams: Manitoba's fight against flooding is complex