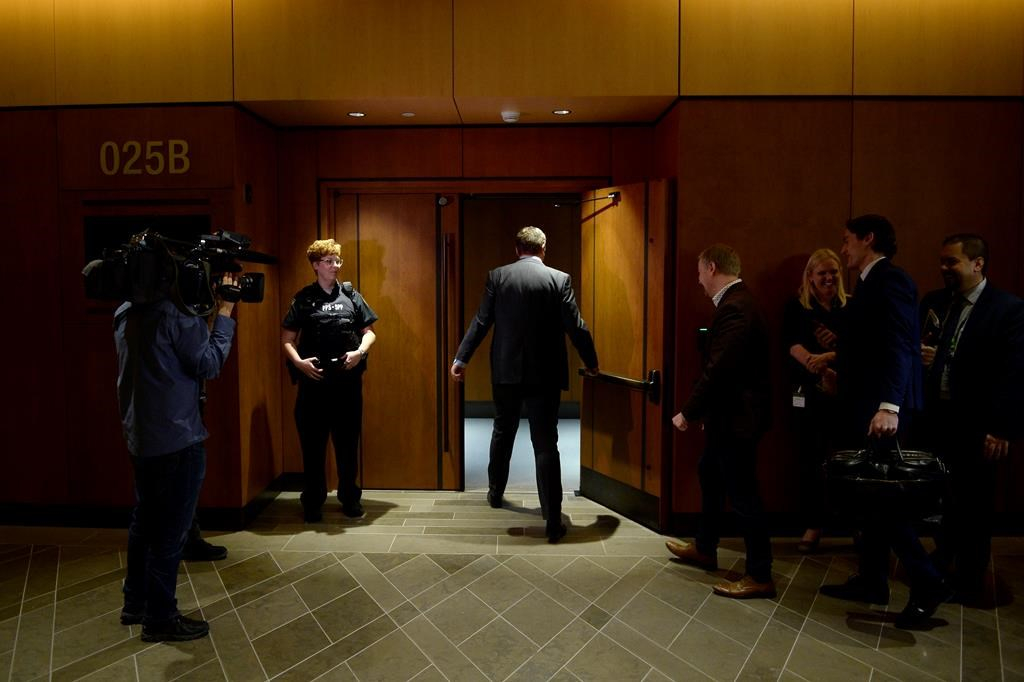 Conservative leader Andrew Scheer leaves after speaking to reporters after a meeting of the Conservative national caucus on Parliament Hill in Ottawa on Saturday, Jan. 25, 2020. Photo by The Canadian Press/Justin Tang
Previous story
Next story

Conservative Leader Andrew Scheer declined Saturday to shed any light on lingering questions about the use of party money to pay for his children's tuition, an issue that threw his party into turmoil just as he announced his decision to step back from the leadership job.

Scheer wrapped up meetings with Conservative MPs and senators to strategize for the return of the House of Commons, saying that his remaining months in the top job will have the dual focus of holding the minority Liberal government to account and laying the groundwork for the next election.

A report commissioned into why the Conservatives didn't form government in the last election, despite a myriad of challenges for the Liberals, will help guide some of that work, he said Saturday, though parts of it no longer apply.

"This is a report to me, that obviously in many cases is not going to be relevant next time because a lot of it was about me, issues that happened in the campaign and advice to me about what I might want to do differently next time," he said.

"Clearly, I won't be leading the party into the next election, so some of those findings are irrelevant, but I will be sharing the key recommendations about structure, some of the lessons learned this time, with the next leader."

He said issues to work on include how the party recruits candidates and what tools were used in the campaign that weren't as good as their opponents.

Scheer announced in mid-December that he would resign as leader as soon as the next one is elected, a date that's now been set as June 27.

When he made the decision, he cited no longer having the heart for the full-time commitment the job requires, given the toll it was taking on his family.

But the move came as allegations surfaced that his use of Conservative donors' money for tuition payments for his children was unknown to several of the party's most senior members, including former prime minister Stephen Harper.

That set off a fight between the party's national council and the overseers of the Conservative Fund, which controls the party purse strings. Harper had been on the Fund's board at the time. The longtime executive director of the party left over the issue, leaving a gaping hole in party management just as they needed to spool up a leadership contest.

Harper later left the Fund's board, giving no public reason.

On Saturday, Scheer said the issue of his own expenses remained an internal party matter and refused to explain the situation at all.

"This is a party with many checks and balances between different aspects of the party and it's being handled that way," he said.

"I don't have anything to add on that."

Buzz grew around the leadership race Saturday. Former Conservative cabinet minister and MP Peter MacKay officially launched his campaign at an event in his old riding of Central Nova, while current MP Erin O'Toole posted a video to social media previewing his own campaign launch on Monday.

Scheer said leadership races are exciting, but pose challenges because candidates debate their various points of view on issues out on the campaign trail.

"My job is to make sure our parliamentary caucus stays focused on the common ground that does exist between all Conservatives," he said.

"That will be where will be highlighting wasteful spending, higher taxes and fiscal mismanagement that the Liberals have been so closely identified with so that's what we're going to focus on here and the leadership candidates will all make their case to the members."

This report by The Canadian Press was first published Jan. 25, 2020.