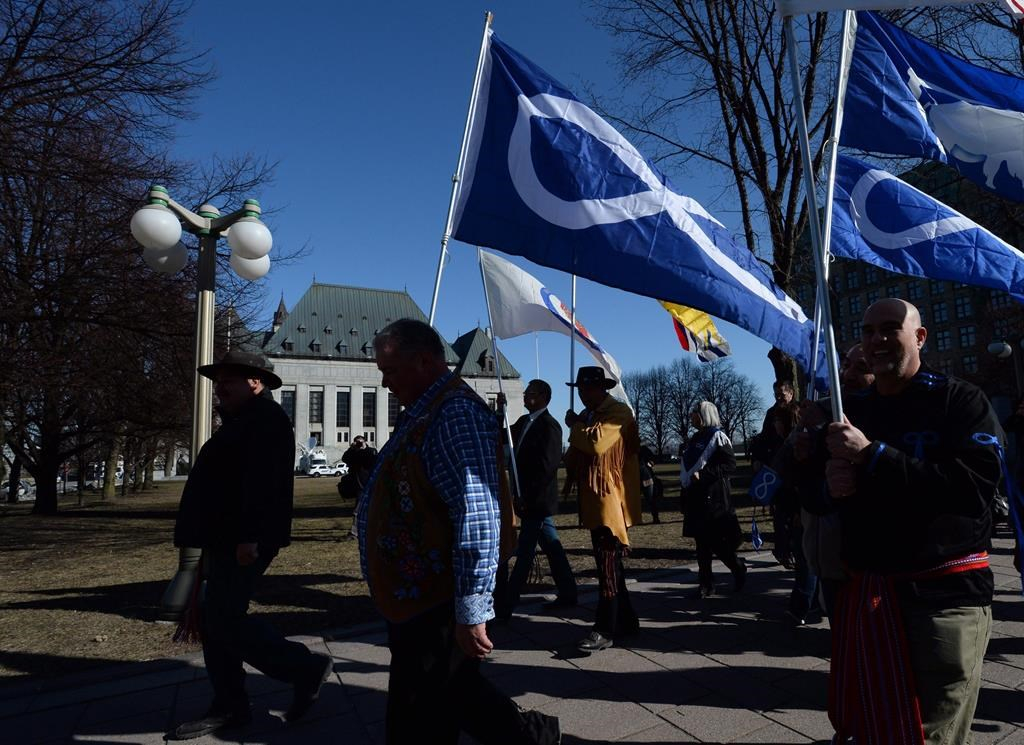 David Chartrand, president of the Manitoba Metis Federation carries the Metis flag as he and fellow Metis Federation leaders and delagates march to the Supreme Court of Canada in Ottawa, on Apr. 14, 2016. File photo by The Canadian Press/Sean Kilpatrick
Previous story
Next story

The regional Metis presidents of Ontario, Alberta and Saskatchewan are calling for reform of the Metis National Council, raising serious concerns about "dysfunction" and about a lack of transparency on the national body's finances and administration.

Metis National Council vice-president David Chartrand rejects the allegations, saying the "real issue" involves concerns about the way the Ontario Metis government defines people as Metis, and the national body has told the Ontario body its membership in the governance institutions of the Metis Nation is suspended.

"This is about the very essence of protecting our nation," Chartrand said.

The Metis Nation of Ontario's president Margaret Froh said the meeting was positive, aimed at building on those agreements by working together and sharing ideas to help their communities.

"There was incredible goodwill, it was a respectful environment. We had an opportunity to talk about things like our registries, to talk about all the work that's gone into our history, our governance, how it is that we manage our registry, the programs and services that we're offering," Froh said.

But the three leaders also discussed concerns they share about governance at the Metis National Council (MNC).

They issued a declaration that the MNC "has become increasingly dysfunctional and unaccountable to its governing members and the Metis citizens."

They point to the fact the national council has not held a board of governors meeting in over 14 months, despite repeated requests for one.

Despite this, MNC president Clement Chartier sent a letter to Froh earlier this week advising her the Metis Nation of Ontario is suspended and no longer eligible to participate in the governance of the national council.

Alberta president Audrey Poitras said the MNC doesn't have the authority to do this. A suspension can only be imposed by members at a general assembly meeting, she said, and she "absolutely" doesn't accept that Ontario has been suspended.

The concerns about Ontario involve its citizenship registry. In August 2017, the provincial government and the Metis Nation of Ontario held a joint announcement outlining work by historians that had identified six new Metis communities in the province.

This sparked concerns in the national leadership that Ontario is allowing people who may not be Metis into its registry, and in doing so, is violating an agreement struck in 2002 among all the regional governments on an official citizenship definition.

The question of Metis identity is delicate, and fundamental. The Metis are descended from European fur traders and First Nations people, who intermingled beginning in the 18th century. But it's only in the 1980s that the Canadian government recognized the Metis as an Indigenous People with rights under Canadian law. And only in 2003 did the Supreme Court of Canada rule that the Metis are a nation distinct from other Indigenous people with rights protected by the Constitution.

Chartrand does not believe the new communities are legitimate.

"They are not part of us, never were. There is no connection historically in any way or fashion that they can use as even an argument to say that they are part of our nation," Chartrand said.

He believes allowing these new communities to become part of the Metis Nation could undermine its integrity by flooding the Metis nations with "hundreds of thousands, potentially millions, of people into our nation that aren't us," Chartrand said.

"It's something we must clearly be fearful of as a people, because we cannot allow anybody to try to water down and create a special interest group of a nation, instead of a citizen of a nation."

In November 2018 Chartrand brought these concerns to a general assembly and a resolution was passed that placed Ontario on probation. It called for an external committee to review Ontario's membership registry.

But Ontario has refused to allow it. Froh said the registry belongs to her government and contains a large amount of sensitive, personal information.

The Ontario nation hired a historical expert to conduct its own review of the files, which Froh believes should help satisfy the concerns raised by Chartrand and others. She also called Chartrand's concerns about thousands or millions of new citizens being added by Ontario "absurd," noting her province's registry has only about 20,000 members.

"What we have said is, we have and will complete this independent review ... and we'll be in a position to be able to talk about it, but we're not prepared to simply open up our registry and all of that personal information to outsiders," she said.

Poitras, the Albera leader, said she doesn't have a problem with Ontario's registry and doesn't understand Chartrand's concerns. She continues to call for a board meeting to discuss them.

"What we want is transparency and accountability, and if somebody is doing something wrong, let's talk about what that wrong is and let's fix it."

The "tri-council" also raised questions about the finances and governance of the MNC in its resolution last week, including calls for more transparency about financial audits, and limits on amounts spent on consultants.

The three leaders called for a working group to discuss reforming the MNC "or the creation of a new national structure to better represent the interests of Metis governments."

Their resolution also says they will continue to work through the MNC on funding negotiations until after the 2020 federal budget is released, as those talks are already underway. But they're asking to negotiate directly with Ottawa in the future on program and service funding and to ensure money goes to Metis citizens and governments "without allocations to the MNC."

Chartrand brushed aside the tri-council's concerns, calling them "smoke and mirrors" designed to distract from a "backroom deal" brokered among the leaders.

Froh said she hopes the politics involved in these issues doesn't overshadow the progress that has been achieved when it comes to Metis governments finally getting recognition by the federal government.

"I don't want people to lose track of the amazing thing that happened last week in that we, as Metis governments, came together, recognizing each other. That is what being self-determining is about, that's what leadership is about: coming together to work together to move the yardstick forward to advance true reconciliation."

This report by The Canadian Press was first published Jan. 26, 2020.