Residents say a corrupt pipeline project is making them sick 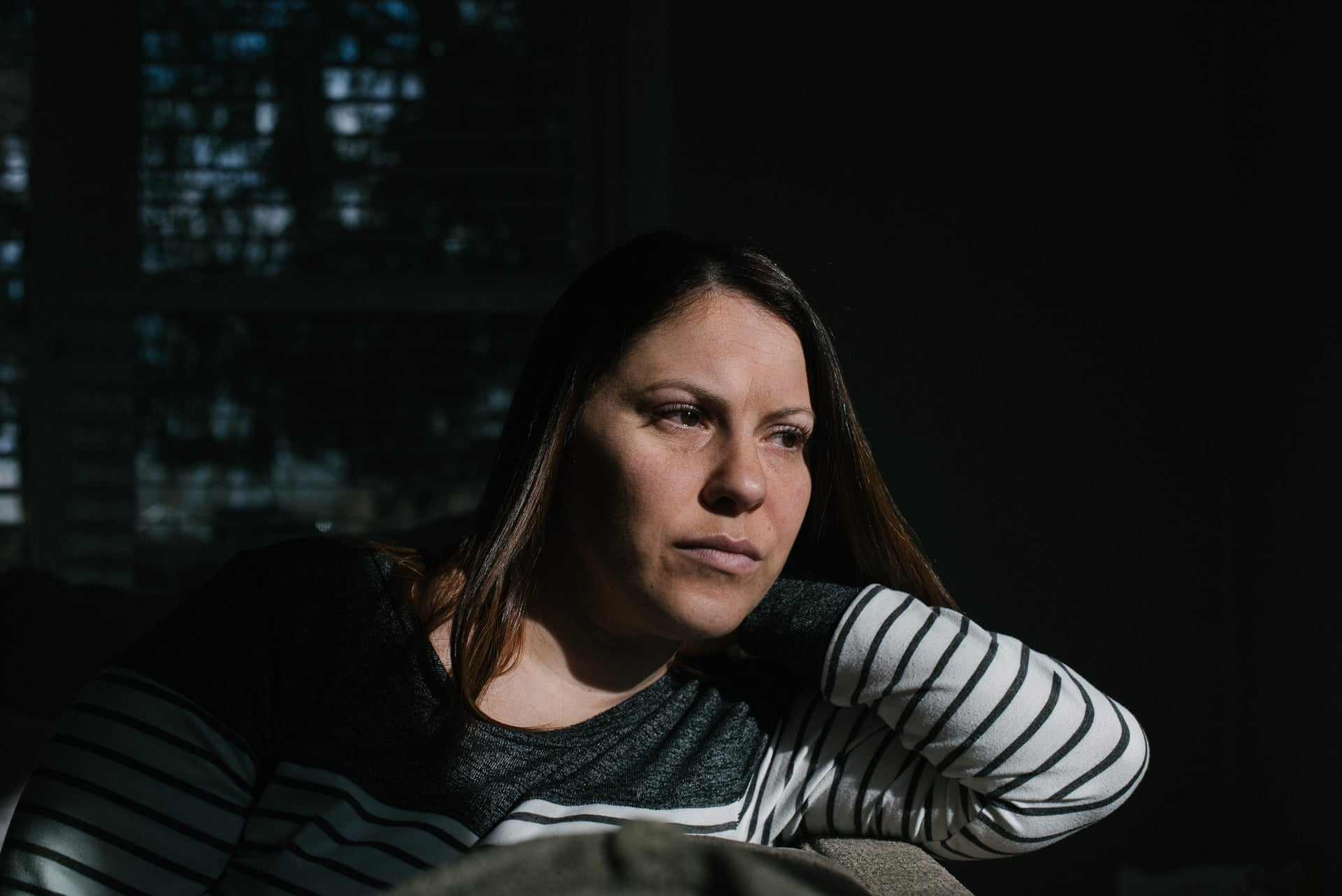 Erica Tarr, 31, at her home in Glen Mills, Pennsylvania. Tarr says, ‘I can’t bathe my daughter, wash my hands or do a load of laundry, it’s like living in constant crisis’. Photograph: Hannah Yoon/The Guardian
Previous story
Next story

Every evening, Erica and Jon Tarr load up their car with towels, toiletries and dirty dishes, before driving their two-year-old daughter to a relative’s home to bathe, wash up and eat a meal cooked in clean water.

The Tarrs, who moved into their spacious detached home in semi-rural Pennsylvania last April, have relied upon bottled water and family generosity since June, when their crystalline tap water first turned murky.

Since then, they’ve spent more than $32,000 on new equipment, lab tests, bottled water, repairing pipes and parts damaged by the turbid water. It still isn’t safe, and they don’t know why.

“It’s sad and frustrating, I can’t bathe my daughter, wash my hands or do a load of laundry, it’s like living in constant crisis. We’re not the only ones in this situation, but we feel so alone,” said Erica Tarr, 31, a paediatric nurse.

The clay-colored water appeared around the time of a drilling mud spill at a nearby construction site for the Mariner East 2 (ME2) pipeline – a beleaguered multi-billion dollar project transporting volatile natural gas liquids from the shale fields of eastern Ohio and western Pennsylvania to an export facility in Delaware county, ready to ship to Europe to manufacture plastics.

The ME2 horizontal directional drilling (HDD) project – which is subject to multiple criminal and regulatory investigations – has contaminated surface and groundwater sources in hundreds of mud spills, and created sinkholes in parks, roads and backyards since construction began in early 2017. HDD drilling is particularly susceptible to spills known as inadvertent returns, in which lubricating mud erupts through weak spots in the rock.

But as the Tarrs’ tap water became increasingly turbid and the pressure plummeted, the pipeline company Sunoco Logistics, a subsidiary of Texas-based Energy Transfer LP, insisted the project was not to blame.

The Tarr family, like 13 million or more American households, rely on a private well for drinking water which they – not regulators – are responsible for monitoring and keeping safe. So, in October they installed a sophisticated filter system and drilled a new well in their picturesque wooded backyard, a couple of hundred meters from the worksite.

The water seemed fine for a few days. But then it started smelling strongly of nail polish and burned Erica’s mouth when she brushed her teeth.

According to local records, in 1992 an old Sunoco fuel pipeline leaked tens of thousands of gallons of hazardous liquids close to the Tarr’s new well. It’s unclear whether the underground legacy contaminants were disturbed by the current construction work. (A geologist hired by the company found that ME2 construction activities did not affect the Tarr’s well.)

Then, in early January, the tap water turned murky once again. John and daughter Evie got sick, and dark grainy sediment coated the cistern.

“It’s a nightmare … living without water for so long is a nightmare,” said Tarr. “ It’s like we’ve been thrown to the wolves, left to figure it out. We can’t keep living like this.”

The US fossil fuel industry has surged over the past decade as a result of unconventional techniques that combine horizontal drilling and fracking to extract oil and gas from shale and other underground rock formations.

ME pipelines have the capacity to transport enough ethane to manufacture just under a billion single plastic bottles every day, according to analysis by Food and Water Watch, a not-for-profit accountability watchdog.

The project has been mired in controversies from the start.

In early 2018 the state department of environmental protection (DEP) shut down the project for a month and fined Sunoco $12.6m for what it called “egregious” violations of environmental laws during its first year of construction. Shortly after, the Public Utilities Commission (PUC) ordered a temporary shut down after sinkholes opened up at a construction site in West Whiteland Township, Chester county.

In January 2020, the DEP issued a $2m fine for another series of drilling fluid spills in 2017 which contaminated Raystown Lake in Huntingdon county. Some were not reported for over 500 days.

Sam Rubin, from Food and Water Watch, said: “There have been questions about the quality of the permits since they were granted in 2014 … there is a pattern of malfeasance that is established and known which was overlooked when permits were granted by the DPE and Wolf administration.”

A spokesman for Democratic governor Tom Wolf said he believes in strong environmental protection and responsibility for permit holders. “The significant fines, penalties, oversight and accountability by the DEP under his administration are evidence of exactly that.”

Still, the project is also subject to criminal and civil investigations, which include:

“Only in Pennsylvania can an operator create a documentable track record over decades of serial destruction and contamination and continue to be permitted by state agencies and aided by legislators in further rolling back environmental protections,” said state congresswoman Danielle Friel from Chester county, who was elected in 2018 on an anti-pipeline ticket.

Friel added: “Pennsylvania has a corruption problem. Through a massive lobbying, campaign finance and public relations effort, the fossil fuel industry has successfully manipulated our legislature, our local governments and regulatory agencies.”

Lisa Coleman from Energy Transfer said: “We are committed to adhering to the rules and regulations specified in the approved permits as we complete the construction and restoration phases of our projects ... We believe our project was properly permitted by all agencies.”

Despite mounting public opposition and fears about the company’s safety record, emergency plans and alleged criminal wrongdoing, Wolf refuses to halt the project.

Rosemary Fuller – one of the Safety Seven – lives a couple of miles from the Tarrs in a large gated property where the family moved in 2003, smitten by the “idyllic, peaceful” location. They signed a permanent easement – or right of way – over to the company in 2015 after being assured the project was safe and unobtrusive, according to Fuller, 60. The pipelines run along the main road which runs through the well-to-do semi-rural neighborhood.

Almost five years later, noisy construction sites are dotted throughout the community, there are six sinkholes within a mile or so of Fuller’s house, and in November a valve site situated within this densely populated residential township leaked gasoline. Residents called emergency services after smelling the strange odour.

Dangerous bacteria including E coli were detected in the Fuller’s well water last July. Since then the family has relied on bottled water delivered by Sunoco.

Last week, a film of petrol blue coloured grease was visible in the cistern and sink where Fuller brushes her teeth.

The project has had a huge impact on the whole family. Fuller’s husband has incurable cancer which means his immune system is compromised, and therefore spends most of the week away from home to avoid getting sick from the water. Meanwhile Fuller spends her time analysing lab reports, risk assessments, and company documents which are spread across the kitchen counters and dining table.

“It’s a nightmare, I’m dealing with this all day every day, when I should be with my husband. I have nightmares that my daughter drives into a sinkhole,” said Fuller tearfully. “I feel so unsure about the present and the future that I just want rid of my home.”