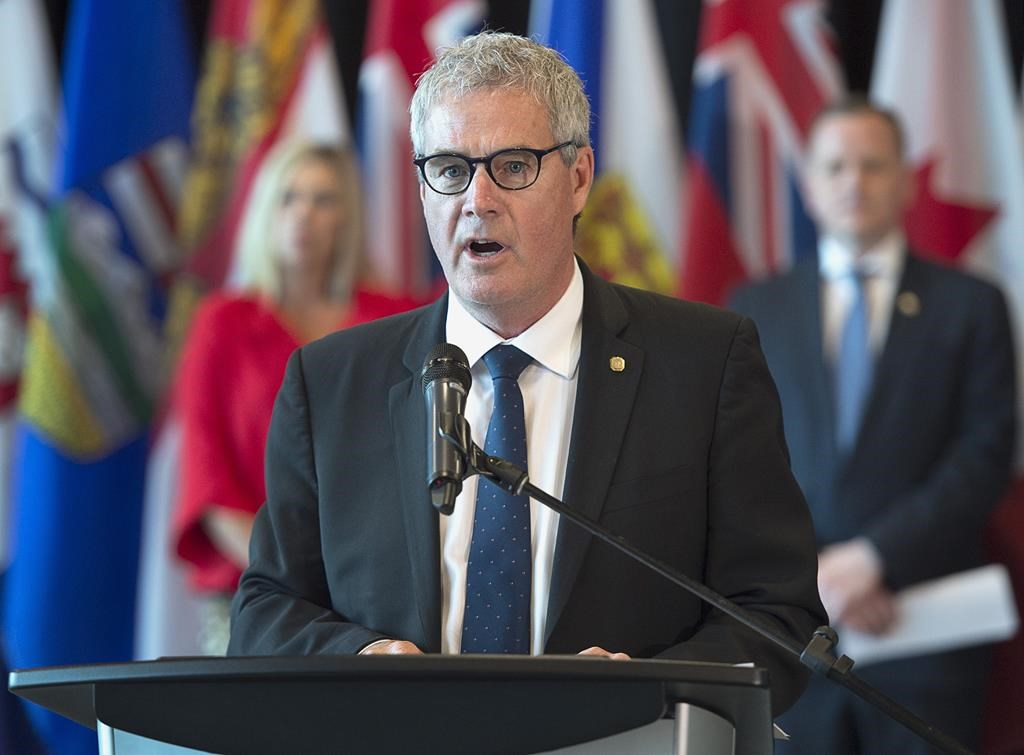 Nova Scotia Environment Minister Gordon Wilson fields questions at the closing news conference of the Canadian Council of Ministers of the Environment meeting in Halifax on Thursday, June 27, 2019. Photo by The Canadian Press/Andrew Vaughan
Previous story
Next story

Nova Scotia's environment minister concedes the province is living up to the spirit of the law but not the letter in allowing the Northern Pulp mill to continue to dump effluent past a legislated deadline Friday.

Gordon Wilson said he agreed with a reporter's description of the government's decision to allow some discharge from the plant past the date when it was supposed to cease all operations at its treatment facility in Boat Harbour, N.S.

Premier Stephen McNeil had previously maintained the Boat Harbour Act, which set the deadline, would not be breached because no new effluent would be flowing into the treatment lagoons near the Pictou Landing First Nation.

Wilson said a ministerial order he issued Wednesday now sets the terms for an orderly shutdown of the Pictou County mill that will be monitored by department officials.

It allows the mill to continue to release warm boiler water into Boat Harbour, as well as water generated from mill hibernation activities, site run-off and the mill's landfill, until April 30.

Wilson said the step was necessary to allow limited operations at the mill site without a new industrial approval from his department. He said he believes the mill's shutdown plan is in sync with his demands.

"Our order that we have is very clear and I will say that what we do have from the company meets everything that we have in the order," he said.

Northern Pulp has moved to mothball the mill after its plan for a new treatment system that would see it pump treated effluent into the Northumberland Strait was rejected by the province last month.

The province is responsible for cleaning up the discharge pipe and has said it would likely take until the end of April before it is cleaned, capped and disconnected from the mill.

The company said in a statement Thursday it has given layoff notices to most of its more than 300 employees but will keep an unspecified number of workers on at the mill site over the next six months.

"Thus far, we have transferred almost all chemicals from the site to other operating facilities in Canada, and the hibernation plan is on track to be completed by the end of April," said Brian Baarda, CEO of the mill's parent company Paper Excellence.

Under the terms of the ministerial order, the mill must measure such things as wastewater flow and file monthly reports to the Environment Department. It must also develop a plan for the decomissioning of the discharge pipe and for leachate disposal from its landfill, which currently runs into Boat Harbour.

The closure of the current effluent facility was a promise McNeil made to the Pictou Landing First Nation, whose lands border the effluent lagoons.

The community had planned to mark the arrival of the provincial deadline with a celebration ceremony, but a spokeswoman said in an email that no event is planned on Friday because of the loss of a young community member this week.

In an accompanying statement, Chief Andrea Paul said her community supports the environmentally safe hibernation of the mill and she called the ministerial order a "small step to the full cleanup of Boat Harbour."

“We do have some concerns regarding the leachate and we are working to get more information as it relates to that and what the plan will be for after April," said Paul. "But overall we are pleased to hear that there will be ongoing testing completed over the next few months, and this offers a bit of extra reassurance to us."

Progressive Conservative Leader Tim Houston expressed disappointment in Wilson's admission on the enforcement of the Boat Harbour Act, which was unanimously passed in the legislature in 2015.

NS effluent dumping mill to move ahead with environmental process