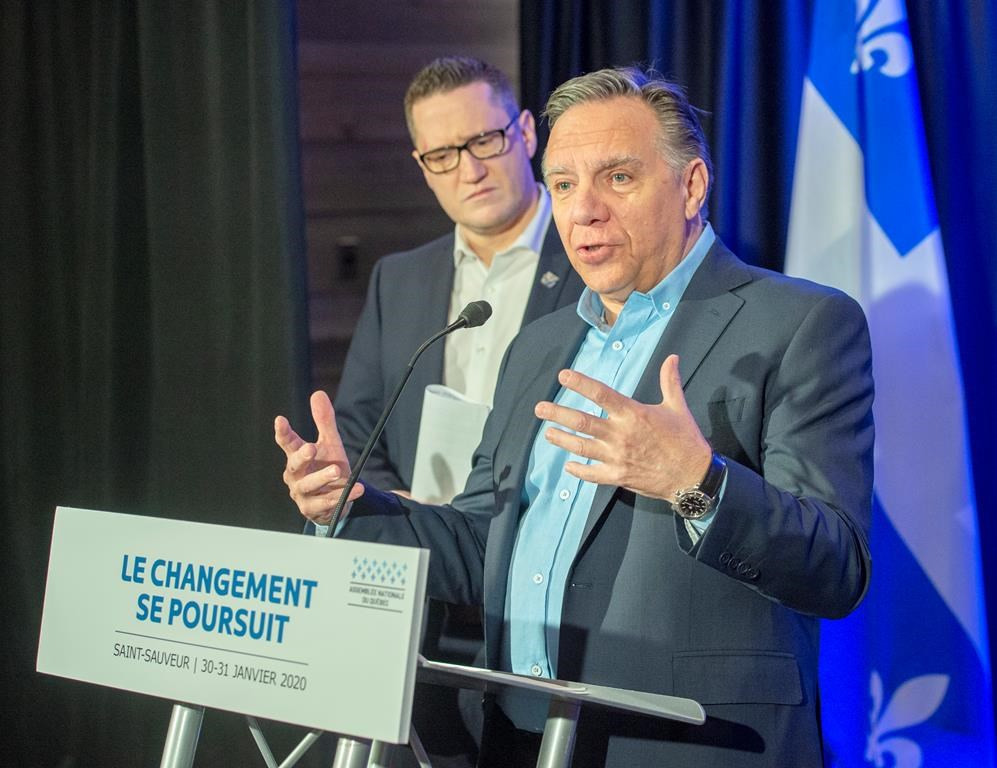 Quebec Premier Francois Legault speaks to the media as Environment Minister Benoit Charette looks on at a news conference to announce the plan to place a deposit on all drink containers on January 30, 2020 in St. Sauveur, Que. Photo by The Canadian Press
Previous story
Next story

Quebec will expand its deposit system to include different kinds of alcohol and beverage containers in an effort to recycle more products and reduce the amount of waste going to landfills.

The province announced its plan Thursday — set to begin by late 2022 — that will see a deposit charged to a wide variety of containers ranging in size from 100 millilitres to two litres, whether the bottles are made of plastic, glass or metal.

The government intends for a simple system that shouldn't require too much of consumers to change their habits, with an estimated 400 privately run drop-off points, said Environment Minister Benoit Charrette.

"In one depot or one store, where the technology will be available, they will be able to bring back all their materials," Charrette said in St-Sauveur, Que., where the Coalition Avenir Quebec are holding a caucus meeting.

"We want the system as simple of possible because we need results, and the industry has a lot of interest to put in place a simple system because they will have to respect some specific goals as soon as 2025."

The plan is to charge 25 cents for wine and spirits bottles and 10 cents for other bottles, including plastic water bottles, fruit juices and milk jugs.

Officials project more than four billion containers will be returned annually, including more than one billion plastic water bottles.

Recyc-Quebec, a government corporation, will oversee the implementation of the new returnable container recovery system, but the companies that market the containers will have to present a deposit management plan within a year.

Quebec will aim to recover and recycle 75 per cent of returnable containers by 2025 and 90 per cent by 2030, with the government establishing targets and penalties if they're not reached.

The announcement was applauded by environmental groups including Equiterre, which said the expansion of the system make sense for environmental, social and economic reasons.

“As we seek to move towards a circular economy, a deposit refund system helps us view used containers as resources rather than waste," said executive director Colleen Thorpe. "By transforming perceptions and habits, we can help reintegrate these items into the manufacturing cycle by sorting at the source, which in turn makes these resources more valuable.”

Greenpeace Canada said beer bottle collection has shown to be beneficial and welcome the plan, but the group urged the Legault government to fight against single-use plastic and seek more ambitious measures like banning water bottles.

The Canadian Federation of Independent Business, which has repeatedly raised concerns about expanding the deposit system, said it believes curbside recycling already in place is the best for recovering single-use beverage containers, though it will participate in the design of the new system.

The Quebec Union of Municipalities applauded the measure but urged a reform of the entire recovery and recycling system in Quebec, with a focus on making producers responsible.

It also expressed support for the province as it navigates a waste-management crisis involving collection and sorting services affecting 26 municipalities.

Groupe RSC, a subsidiary of French firm TIRU, announced it would be pulling out of operations in four plants it operates across the province — two in the Montreal area, one in Chateauguay and another in Saguenay — "due to the collapse of the world market for recycled paper."

The company has said it has encountered "great difficulties linked to the economic model of its sorting centres" with financial losses in recent years.

The Quebec government said this week the facilities will maintain operations in the short term until new operators can be found.

— with files from Jocelyne Richer in St-Sauveur, Que.