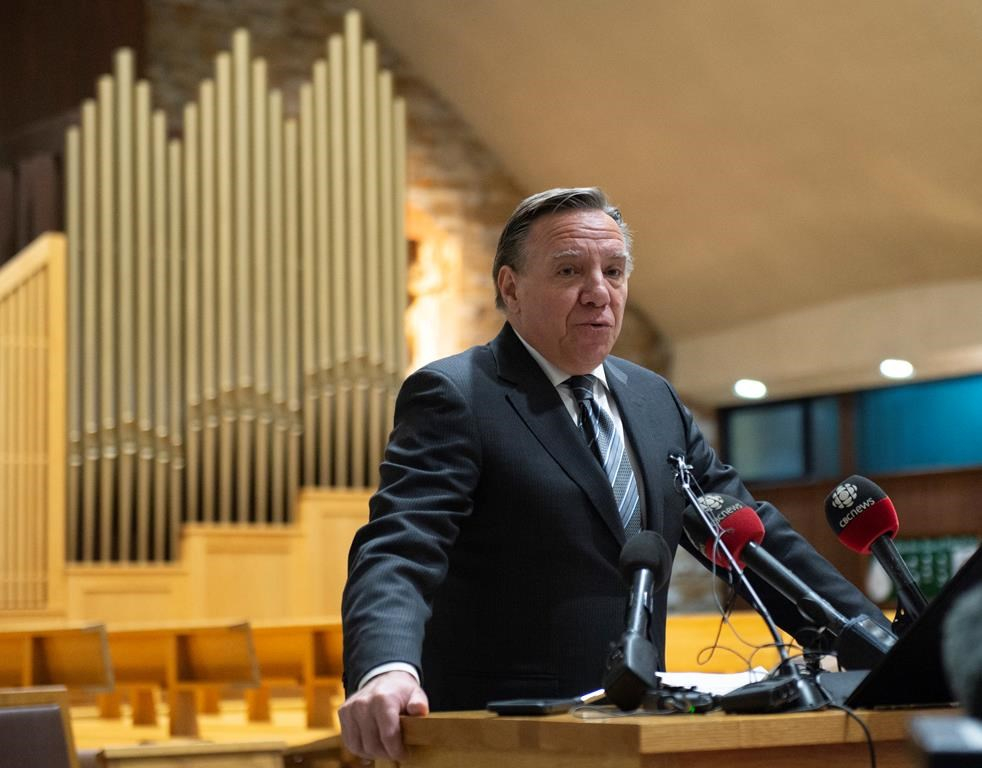 Quebec Premier Francois Legault speaks at a community dinner marking the commemoration of the mosque shooting on Wednesday, January 29, 2020 in Quebec City. File photo by The Canadian Press/Jacques Boissinot
Previous story
Next story

Quebec cabinet ministers are speaking out about a deluge of hateful comments posted to the premier's Facebook page after he published a message in support of the province's Muslim community.

Later that evening, a message was posted to Legault's official Facebook page stating that Quebec is not immune to hatred, but its people stand in solidarity with Muslims in the province.

Since then, the premier's page has been flooded with hateful comments targeting the community.

Bonnardel says some people in the province need to be better educated.

"There is some pedagogy that needs to be done," he told reporters in St-Sauveur, Que. "There is a problem with certain people who dare to think that, who dare to write that."

Legault sent a written statement to Montreal's La Presse, saying, "hate and intolerance do not have their place in Quebec."

In November, Legault cited positive comments on his Facebook page to justify his government's controversial immigration reforms, but in his statement to La Presse he noted that "the best and the worst of human nature" are on display on social media.

"There is a small minority of people who systematically use social media as a megaphone to propagate their hatred," he said. "We have to denounce them. They do not represent Quebec."

The premier's staff worked to remove the offensive posts, but as of Friday morning new ones were still appearing.

About 300 people, including politicians, survivors and gun control activists, gathered in a Quebec City church Wednesday to remember the victims of the 2017 shooting.

The gunman pleaded guilty to the killings and last year was sentenced to life in prison without possibility of parole for 40 years.

This report by The Canadian Press was first published on Jan. 31, 2020.

It is awful that the Premier

It is awful that the Premier was attacked when reaching out to this community. He should not be surprised at the reaction. His racist Bill 21 does put the lie to his attempt to appear tolerant of minorities and certainly encourages and validates those who attacked him on Facebook.

Hate and bigotry are always

Hate and bigotry are always the product of existential fear. People who have lived in insulated white only communities and have taken for granted their superiority over everyone else are ill equipped to deal with any manor of "other". Quebecers had reason to hate and fear les anglais, their own clergy, their facist government. Those habits of mind are too easily resurrected by imaginary threats. So far, Quebecers have been the aggressors rather than the victims where the "Other" communities are concerned - starting with our indigenous people and running the gamut through all the non-francophone, non white, people who have settled in La belle province. Which is not displaying much of its beauty when it resorts to hate.