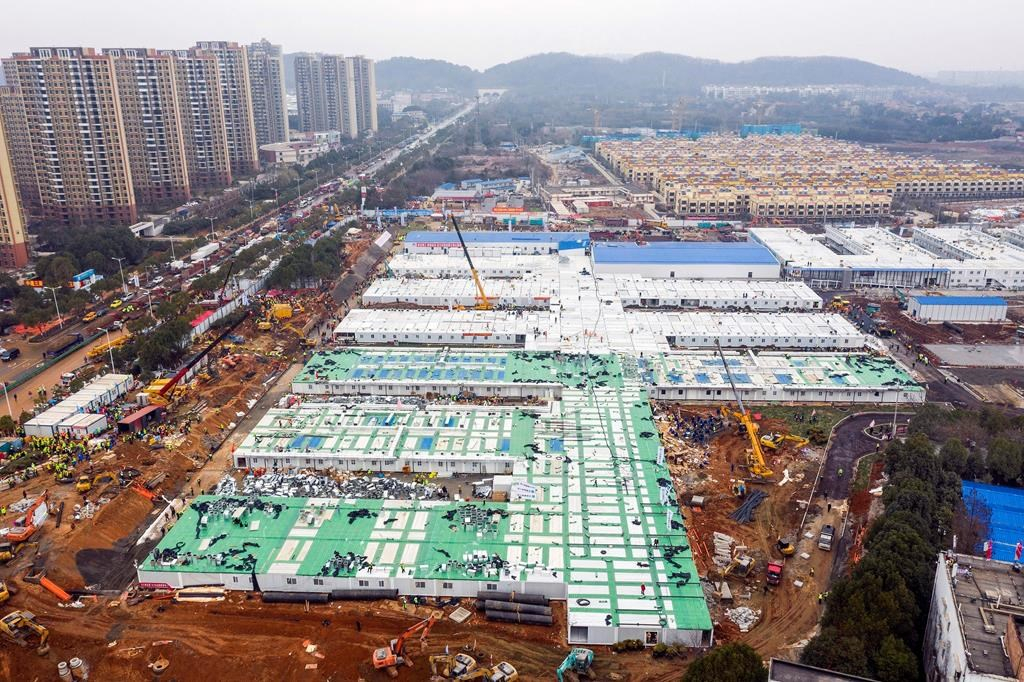 The Huoshenshan temporary field hospital under construction is seen as it nears completion in Wuhan in central China's Hubei Province, on Sunday, Feb. 2, 2020. File photo by Chinatopix via AP
Previous story
Next story

The number of people being tested for the novel coronavirus in Ontario seems to be dropping as more time passes since China imposed rigid travel restrictions, the province's chief medical officer of health said Monday.

It has been about 11 days since China began essentially preventing people from leaving Wuhan and other cities in Hubei province where the virus originated. Health officials have found that coronavirus symptoms can appear up to 14 days after exposure.

"With our data coming through, we have (what) seems like dropping numbers of people under investigation being submitted," said Dr. David Williams.

The 14 days is a cautious number, Williams added, saying many cases have developed between seven and nine days after exposure, with a few seen at 11 or 12 days.

"So you can see we're sort of coming out of that first wave of individuals who had been in the Hubei province on or before the 24th of January," he said.

Three of Canada's four confirmed cases are in Ontario, and Williams said those patients are all at home and doing well. The most recent case, announced Friday, was a mild one that had initially tested negative, and officials said nearly all of the other negative results have been re-tested and confirmed since then.

There have now been 76 people whose tests have been confirmed as negative, with three listed as "presumptive negative" awaiting final confirmation from the National Microbiology Laboratory. Results are still pending for 26 people.

Williams said most of those Ontario cases involve people who have travelled to the affected region and are showing symptoms such as a cough and fever, but he said doctors have occasionally requested tests from visitors to other parts of China as well.

The Canadian government is awaiting final approval from Chinese authorities to fly through restricted airspace and land at the closed airport in Wuhan to pick up Canadian citizens from the quarantined region of the country.

Once back in Canada, those people will be quarantined for 14 days at Canadian Forces Base Trenton in eastern Ontario. There are 304 Canadians asking for assistance to return home, but only 280 have Canadian passports, federal Health Minister Patty Hajdu said Monday.

Other countries continued evacuating their own citizens from hardest-hit Hubei province and restricting entry for anyone who recently travelled to China.

Paul MacKinnon, executive vice-president of the Canada Border Services Agency, said Monday that 791 travellers who arrived at Canadian airports between Jan. 22 and Feb. 2 reported having been in Hubei province. They were subjected to additional screening and 18 of them who seemed ill underwent further screening by public health officials, MacKinnon told the House of Commons health committee.

— with files from Laura Osman in Ottawa and The Associated Press.