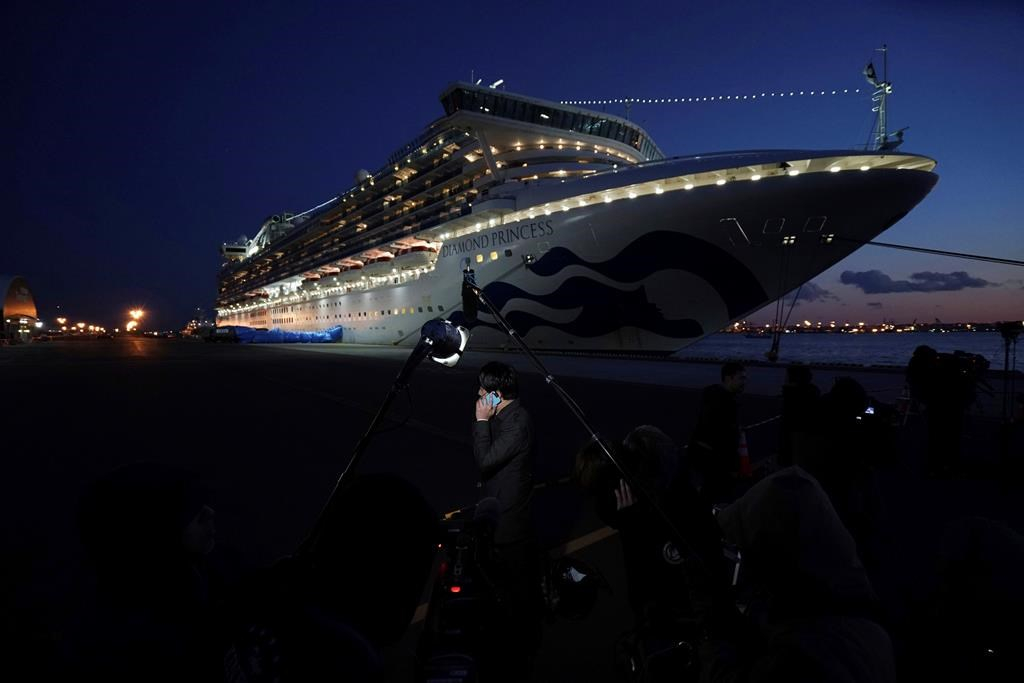 Princess Cruises says a Canadian is among an additional 66 confirmed cases of the novel coronavirus aboard the Diamond Princess cruise ship docked in the Japanese port city of Yokohama, just outside Tokyo.

The company says in a release issued early Monday morning that the positive test results were confirmed by the Japanese Ministry of Health and that it is following the ministry's "disembarkation protocols to provide medical care for these new cases."

This latest case raises to eight the number of Canadians aboard the Diamond Princess who have contracted the new virus. The patient will join the seven other Canadians who were earlier taken to Japanese hospitals for treatment and monitoring.

Seven cases of the virus have also been diagnosed in Canada, four of them in British Columbia and three in Ontario.

The federal government said Sunday that it was monitoring the well-being of 285 Canadians quarantined on the Diamond Princess and another cruise ship anchored off Hong Kong, however, health officials have given the Hong Kong ship the all clear, allowing passengers and crew to disembark.

Meanwhile, Canada's chief public health officer, Dr. Theresa Tam, said in a statement Sunday that none of the 213 evacuees from Wuhan, China — the epicentre of the outbreak — who are quarantined at Canadian Forces Base Trenton, Ont., have exhibited any symptoms of the virus.

"The plane would be leaving (China) on the 10th of February, bringing back the last group of Canadians who want to be repatriated on the 11th," Champagne said.

There are 236 Canadians waiting to board the plane from a city that has been under quarantine for weeks as Chinese authorities try to contain the virus's spread, Canadian officials said Sunday.

Most cases of the new coronavirus are mild, but the respiratory illness can be deadly in some people.

The mainland death toll rose by 97 to 908 in the 24 hours through midnight Sunday and 3,062 new cases were reported. That was up 15 per cent from Saturday and broke a string of daily declines.

The fatality toll from the new virus has passed the 774 people believed to have died in the 2002-03 epidemic of severe acute respiratory syndrome, another viral outbreak that originated in China. And the current total of 40,171 cases on the mainland of the new virus vastly exceeds the 8,098 sickened by SARS.

More than 440 cases have been confirmed outside mainland China, including two deaths in Hong Kong and the Philippines.

Coronavirus: Canada standing by and ready to help China