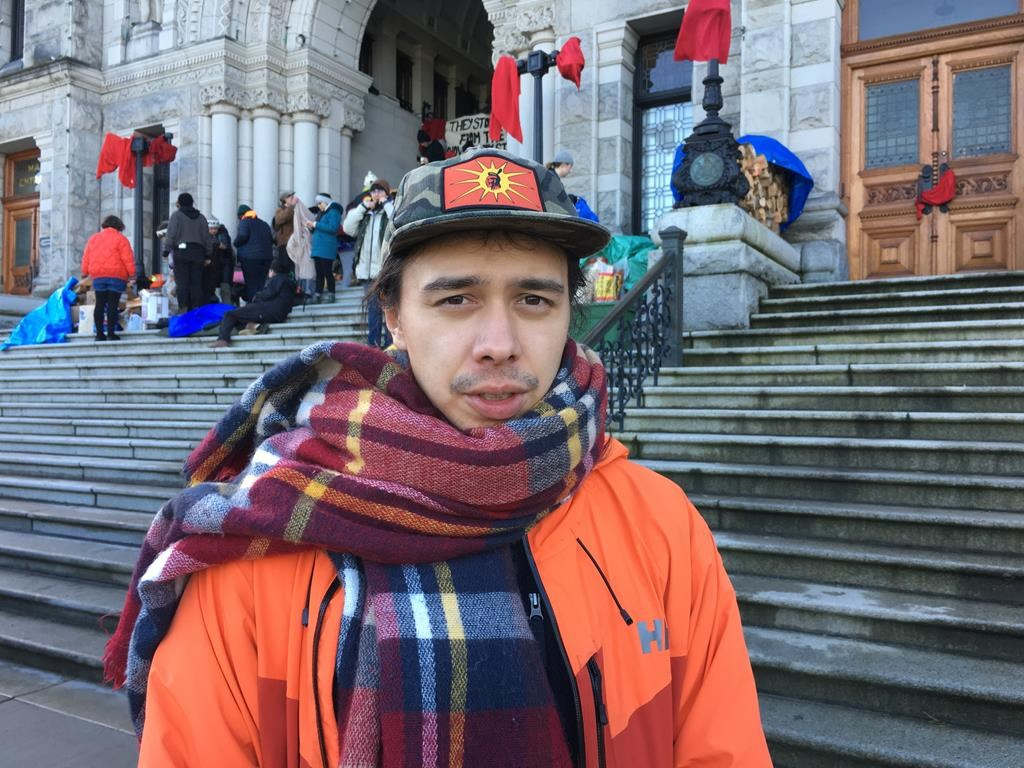 Protester Kolin Sutherland-Wilson is shown at the legislature in Victoria, on Saturday, Feb.8, 2020. Photo by The Canadian Press/Dirk Meissner
Previous story
Next story

Efforts by hereditary chiefs of the Wet'suwet'en Nation to halt a pipeline project have prompted arrests and spurred a national movement that saw protesters light a ceremonial fire at the front steps of the legislature in Victoria and block railway traffic in Ontario.

The mounting protests came as RCMP officers arrested 11 people who allegedly barricaded themselves in a warming centre in a forested area near the work site in northwest British Columbia on Saturday. They're accused of breaching a court injunction related to opposition to the 670-kilometre Coastal GasLink pipeline that crosses Wet'suwet'en territory.

Four others were arrested on Friday.

An Indigenous youth spokesman told about 300 people gathered at the B.C. legislature Saturday that RCMP presence in the Wet'suwet'en territories represents an armed invasion.

"This is the third day of an invasion," said Kolin Sutherland-Wilson. "What Canada is willing to do to the Wet'suwet'en people they are willing to do to any of us. We will not stand down because our ancestors never stood down."

Sutherland-Wilson said the fire burning in a steel fire pit on the front steps of the building is sacred and will continue to burn during the protests. He said the presence of a large pile of chopped firewood indicates people could be planning an extended stay.

Earlier Saturday, dozens of youths who slept near the legislature's ceremonial entrance gates, huddled around the fire wrapped in blankets and sleeping bags.

"We're definitely occupying this space while the invasion takes place because it's highly symbolic," said Sutherland-Wilson. "We're here at the gates, the royal gates that only the royalty and the lieutenant governor general can use. We're making it clear that the Canadian rule of law has never been just to Indigenous peoples."

B.C.'s legislature is set to resume sitting Tuesday. The return of politicians for the spring session includes the arrival of Lt.-Gov. Janet Austin at the legislature gates to officially start the proceedings.

The B.C. legislature was not the only location where people came out against the pipeline — protesters in Ontario stopped railway traffic east of Toronto.

Ontario provincial police said protesters have blocked VIA Rail and Canadian National Rail traffic from Toronto to Montreal and Ottawa since Thursday night.

They said officers were monitoring the protest, which is taking place near Belleville, Ont.

GO Transit said train service on their Barrie line had been suspended within Toronto due to protester activity.

"It's important for us to make economic disruption because the government isn't listening and they're invading unceded Indigenous territory," said Toronto protest organizer Kayleigh McGregor. "A lot of people are really appalled and angry."

She said the protests around Ontario were prompted by the increase in police presence in Wet'suwet'en territories and the arrest of people at the camps. Protesters also showed up to the constituency offices for Deputy Prime Minister Chrystia Freeland and Finance Minister Bill Morneau, McGregor said.

Meanwhile, the RCMP said several of their vehicles have been damaged by metal spikes at a protest site where people are opposing the Coastal GasLink pipeline in Wet'suwet'en nation near Smithers.

Mounties say the vehicles were damaged when they entered a court-ordered exclusion zone for protesters on Friday night.

A post from the Unist'ot'en camp in Wet'suwet'en territory Saturday said RCMP helicopters left the area in the afternoon.

This report by The Canadian Press was first published Feb. 8, 2020.

—with files from Salmaan Farooqui in Toronto.